Bullpen is a work in progress (again) 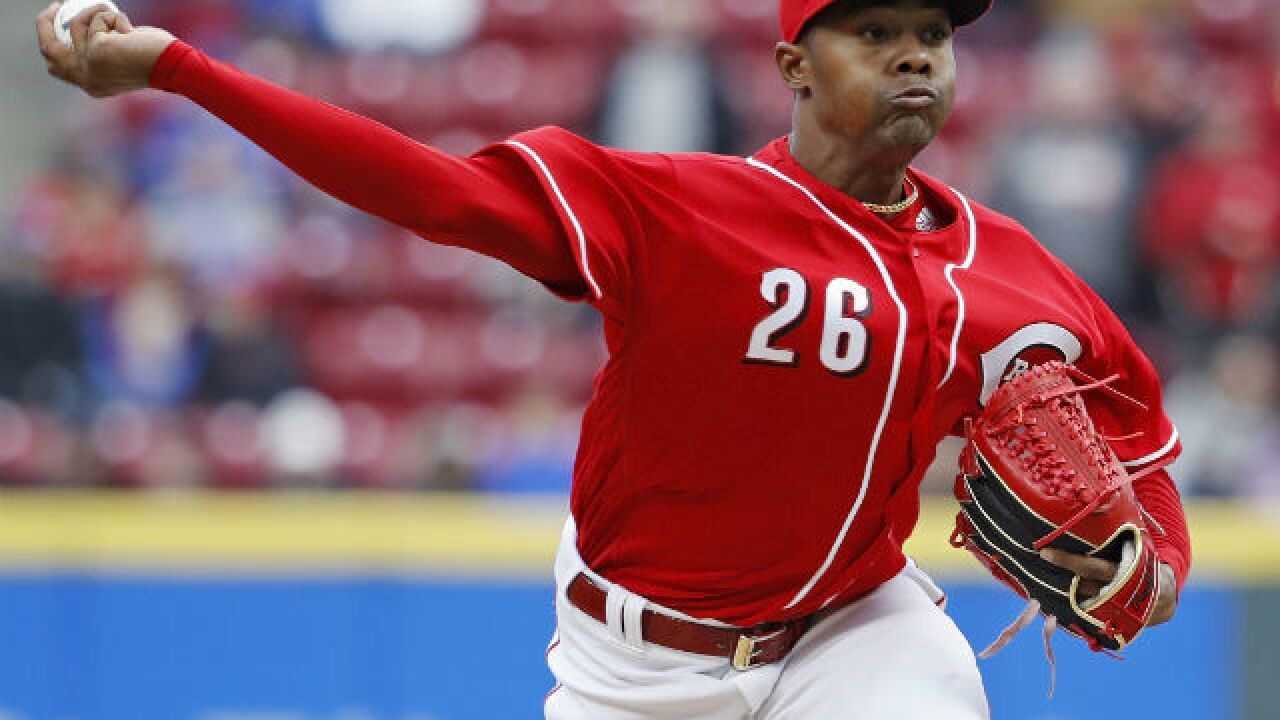 Image copyright 2018 Getty Images. All rights reserved. This material may not be published, broadcast, rewritten, or redistributed.
<p>NEW YORK, NY - SEPTEMBER 10: Raisel Iglesias #26 and Tucker Barnhart #16 of the Cincinnati Reds celebrate after defeating the New York Mets at Citi Field on September 10, 2017 in the Flushing neighborhood of the Queens borough of New York City. (Photo by Jim McIsaac/Getty Images)</p> 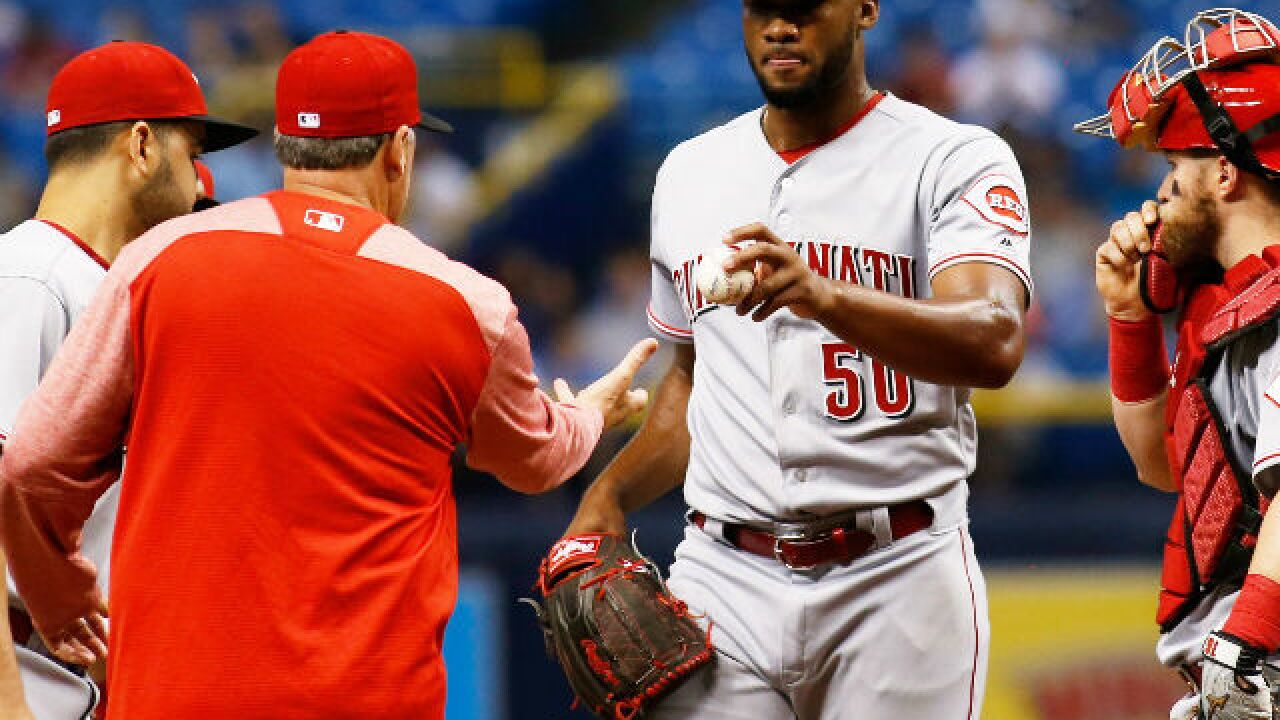 CINCINNATI - The Reds moved the home bullpen at Great American Ball Park from center field to right field this season, resulting in an awkward moment for Bryan Price when he pointed to the wrong one while making a pitching change on Opening Day.

It got some laughs and also served as a metaphor for Price’s ongoing efforts to shore up his relief corps.

The bullpen hasn’t been a strength for the Reds in quite some time. In fact, since 2016, when they set a major-league record for giving up a run in 21 straight games, it’s been among the worst bullpens in baseball.

That can be attributed to a number of factors, including the trading of Aroldis Chapman in December 2015 and a rebuilding process that has focused on developing young starters. Until they mature and start logging innings, young starters tend to put more pressure on the ‘pen.

Last season the Reds bullpen led the major leagues in walks and hit batters, and it led the National League in runs allowed and earned runs while ranking 14th in bullpen ERA. Price used 31 different pitchers last year, fifth-most in the major leagues, while trying to sort through injuries to find any reliable combinations.

For one thing, the Reds have a bona fide closer in 28-year-old Raisel Iglesias, who is signed through 2020. Iglesias had 28 saves last season and led the major leagues with eight saves of at least two innings. He had a four-out save in a 1-0 win over the Cubs on Monday.

Price doesn’t want to use two-inning saves from Iglesias as a vehicle to win games. That means they need a path to hand games over to the Cuban right-hander in the ninth so he can finish things off with an electric slider or two. At the moment, that is complicated by the fact that eighth-inning set-up man extraordinaire Michael Lorenzen is on the disabled list with a shoulder injury.

“It’s a matter of trying to find that mix,” Price said. “I think (by) defining inning or role definition, I’m going to put myself in a corner and I don’t like to do that.”

Over the past few years, the Reds haven’t made significant investments in the bullpen, and that stands to reason. The first priority has been the rotation, and conventional wisdom is that the bullpen would get stockpiled by sheer attrition. We’re seeing that now to an extent with guys like Amir Garrett and Cody Reed. If they don’t make it as starters, they could excel as relievers.

When the Reds have acquired bullpen help, it has been of the veteran filler variety, a la Drew Storen in January 2017. This offseason, they were a bit more calculated, bringing in ground-ball specialist Jared Hughes and David Hernandez. Like Lorenzen, Hernandez began the season on the DL but with an injury not deemed long-term. Hughes and Hernandez are good fits for Great American Ball Park. Neither gives up a lot of home runs. Kevin Quackenbush and Yovani Gallardo have joined the mix as well.

“It’s definitely a good group down there, bringing Jared, me, and even Quack in here, guys that have gotten some big outs over the course of our careers,"  said Hernandez, who resumed throwing this week without pain. "Hopefully, we can show the young guys how to prepare, how to get ready, and how to attack major-league hitters. The ins and outs of being ready every day is the toughest part.”

There’s plenty of young talent at Price’s disposal down there as well.

Wandy Peralta, 26, led all major league rookies last season with 69 appearances, with the left-handed specialist posting a 1.80 ERA in his final six outings.

Garrett is kind of a wild card. At times, he showed some of the best stuff of any Reds pitcher last season and, while he’s a candidate for the rotation, the 6-foot-5, 228-pounder would fit well in a long relief role.

Any of the talented young Reds starters who don’t stick in the rotation could find roles in the bullpen, giving this club some real depth.

“I think we have good equipment with Hughes, Peralta coming off of a strong year, and when we get David Hernandez back,” Price said. “With (Austin) Brice and Gallardo, Quackenbush and Amir, they’re going to define themselves as well - either as guys better in the middle of the game or guys that give us a break when we need someone late.”

There is a unique bond in the bullpen, much like offensive linemen who mostly go about their business without fanfare (aside from the closer) in a mostly isolated environment. That’s where veterans like Hughes and Hernandez come into play. With a largely young Reds pitching staff, they have to own the room. Both say they welcome that role.

“The best bullpens are the ones that attack,” said Hughes when asked about his message to young Reds relievers. “Get ahead in the count, go out there with their best stuff and just trust it.”

Hernandez said this year’s Reds remind him of 2011, his first year in Arizona when the Diamondbacks won 94 games and an NL West title a year after losing 97 and finishing last.

“I see a lot of what I saw then,” he said. “A lot of things have to go right. Health was on our side. We went from 90 losses to winning a division. I could see it. The bullpen depth, over the course of the season, we have guys who are going to be a really vital part, who have to step in and get big outs. Hopefully, our younger guys will take a step forward.”

The season is in its infancy, but once Lorenzen and Hernandez are back from injury and the rotation puzzle comes more into focus, Price could have the best bullpen in his five-year tenure. Time will tell.

It certainly beats the past alternative of having to turn to Blake Wood, J.J. Hoover or Tony Cingrani. Price now has depth, options, and some real talent in the bullpen.

Which is where again? If you're the manager standing on the mound waiting for your reliever, you want to know in which direction to look.

“Look out in center, keep thinking that someone from the Reds is gonna run out and they don't, and then I get ambushed from some guy on my right," Price said, laughing. “There's definitely some benefits to (the bullpen) being closer to the dugout. Then of course, in the dead of summer that sun can end up baking that center field area pretty good. There's really not any place to get out of the sun."

The sun might still shine on the Reds’ bullpen in the right field corner this season, but in the figurative sense.