Reds need to catch a star with No. 2 draft pick, but who? 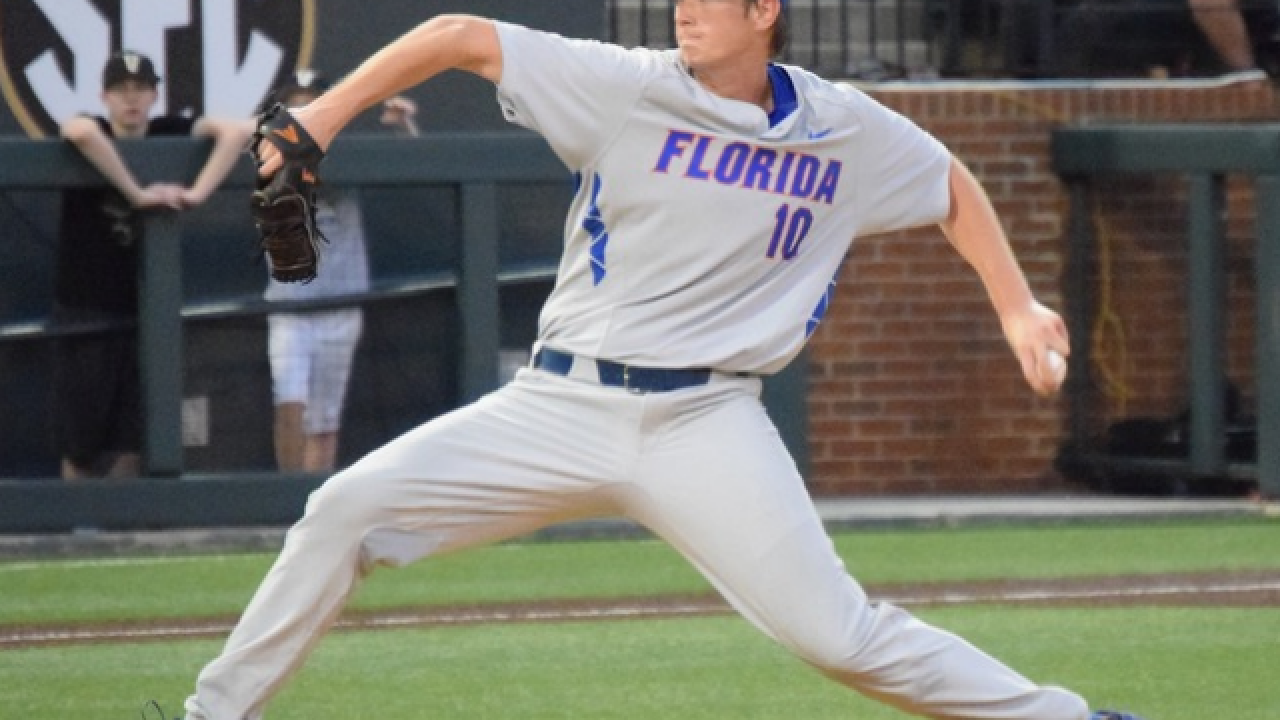 <p>University of Florida lefty A.J. Suk could be the Reds' choice with the No. 2 pick in the MLB draft this week, if the Phillies don't take him at No.1.</p>

CINCINNATI — It can’t be Kurt Stillwell.
The Reds have the second pick in this year’s draft, which begins Thursday. The only time the Reds had a pick this high was 1983. They picked Stillwell. The shortstop wasn’t a complete bust — he played nine years in the big leagues and even made an All-Star Game — but Stillwell wasn’t what you would call an impact player.
The Reds need to get a lot of bang out of their pick this year because:
A) they need more talent in the system; and B) their fans can use a dose of feel-good.
The consensus top talent in the draft is A.J. Puk, a left-hander from Florida. John Manuel of Baseball America, the bible of baseball development and scouting, thinks the Reds will take either Puk or Nick Senzel, a third baseman from Tennessee.
Keith Law of ESPN.com has the Reds taking Kyle Lewis, an outfielder from Mercer, with the Phillies taking Puk with the No. 1 pick.
“I’m pretty confident it will be either Puk or Senzel (for the Reds),” Manuel said. “There’s a small, outside chance the Reds make a deal with a prep (player), like Delvin Perez.”
Reds scouting director Chris Buckley won’t tip his hand, but he acknowledges the Reds are looking at that group.
“There’s good accuracy there,” Buckley said. “Puk and Lewis are guys most people have at the top of the draft.”
Lewis would fill a pressing need in the Reds system: A power-hitting, athletic outfielder. The Reds have no one like that among their top 10 prospects.
Puk doesn’t fill a pressing need. Seven of the Reds’ top 10 prospects are starting pitchers, including left-hander Cody Reed and Amir Garrett at No. 2 and 3.
But if the Phillies take Lewis, there’s an excellent chance the Reds will pick Puk.
Whether they’re picking second or 22nd, the Reds select the best player on their board — regardless of position, regardless of whether he’s a high school or college player.
SEE the Reds' first-round picks through the years.
“That’s been sponsored by Walt (Jocketty) and Dick (Williams) and ownership,” Buckley said. “We always try and tell people that it’s not like the NFL Draft, where the guy is going to play for you next year. Todd Frazier and some of these college guys take four years to get to the big leagues.
“We’d like them to get here next year. (Mike) Leake did that. It doesn’t happen often.”
Buckley’s point: Needs change in the time it takes to develop players, and you can trade players. Stillwell’s great impact for the Reds came when he was a part of the trade that brought pitcher Danny Jackson from the Kansas City Royals before the 1988 season. Jackson went 23-8 that year.
The Reds picked first baseman Yonder Alonso in 2008, even though he was blocked by Joey Votto. Alonso, however, was key to the Mat Latos trade, as were former top picks Yasmani Grandal and Brad Boxberger.
Puk’s numbers aren’t overwhelming. He’s 2-3 with a 3.21 ERA. But his stuff and 6-foot-7 size give him great potential. Here’s what Baseball America says about him:

“Puk throws his fastball in the mid to upper 90s and thanks to the downhill angle and the excellent extension his 6-foot-7 frame enables him to get, the pitch plays up even further. Puk’s slider and changeup both could use further refinement, but both have a chance to develop into average offerings. His slider sits in the mid-80s with horizontal sweeping action, though it can sometimes back up.”

Lewis’ numbers were overwhelming. He hit .395 with 20 home runs and 72 RBI. He walked 66 times and struck out 48. Mercer is a smaller Division I in Georgia, so there were skeptics on Lewis. Here’s what BA says about him:

“(He) went to the Cape Cod League for the summer and cemented himself as a first-rounder, showing power, arm strength and athleticism. Lewis is a right-handed hitter with plus-plus raw power. He has some swing-and-miss to his game, and his swing plane can be somewhat steep, but he’s developed a reputation for destroying mistake pitches and working at-bats until he gets the pitch he’s looking for.”

“His carrying tool is his right-handed bat. Senzel is a patient hitter with a mature approach and a swing that’s geared up for line drives. He makes consistent hard contact in games and in batting practice. Senzel shows the ability to drive the ball with authority to the opposite field or to his pull-side gap. He hits more for doubles than home runs at this point, but he can show raw power in batting practice when he’s asked to, leading some evaluators to believe that he will develop more game power as he continues to mature. This spring, Senzel has shown significantly improved defense in the infield, shifting to shortstop later in the season from third base.”

Buckley says the Reds haven’t made a final call.

“I’m sure Philadelphia has the same couple. They control what we do.”

But his last four top picks — Nick Travieso, Phillip Ervin, Nick Howard and Tyler Stephenson — are struggling in the minors. Stephenson, a high school catcher, was the highest of those picks at 11th.
The Reds have had five top-five picks. They’re batting .200 in that situation. They got Barry Larkin with the fourth pick in 1985. The others didn’t turn out so well: Stillwell, second in ’83, Pat Pacillo, fifth in ’84, Chad Mottola, fifth in 1992 (infamously after Marge Schott nixed a pick of Derek Jeter) and Chris Gruler, third in ’02.
“It’s always hard to pick the right guy,” Buckley said. “But in this case, you have a better idea who you’re scouting. Coming into the summer, there are three or four guys that have separated themselves. We had two or three years where we picked 27th. You have no idea who you’re scouting. You just have to go and hope you have them lined up pretty good.”
That’s easier when you’re picking second.
“We like to think we know a whole lot about the few that we’re scouting,” Buckley said.
RELATED: Mason HS grad may be first-round pick.
Copyright 2016 Scripps Media, Inc. All rights reserved. This material may not be published, broadcast, rewritten, or redistributed.