Reds hand the keys - and their hopes - to young pitchers

No more retreads as in past years

CINCINNATI -- It was another spring of discontent for Cincinnati Reds pitchers.

Once again, injuries muddied the waters for a team that lost 98-94-94 games and finished in last place the past three years.

But, as Opening Day arrives, this spring feels different.

The Reds now have some quality young arms ready to hit the ground running. And for the first time since this rebuilding process started four years ago, they’re being handed the keys.

It's a welcome sign that the process has moved into a new stage.

Besides Homer Bailey, Bryan Price's starting rotation will include Luis Castillo (25), Sal Romano (24) and Tyler Mahle (23). The fifth spot, at least for the first week or two, will go to Cody Reed (24).

Instead of scrambling to sign a veteran or two as they have in past years (See: Arroyo, Scott Feldman, Alfredo Simon), the Reds have plenty of depth this time around, including several young pitchers who got their feet wet in the big leagues last season.

Here’s what they have:

Bailey’s 7.50 spring training ERA through five starts isn’t the biggest concern with the 31-year old right-hander, it’s three surgeries over three seasons. He did finish strong last season, going 2-3 with a 3.58 ERA in his final seven starts including seven shutout innings in his final outing.

Bailey, entering his 10th season, is making $23 million this year and has two years remaining on a six-year deal, a significant investment for a .500 pitcher with a lifetime 4.42 ERA, for a team that’s rebuilding.

That said, it’s difficult to throw 20-something arms out there every fifth day without at least one veteran anchor.

It figures that Price would make Bailey his Opening Day starter on Thursday. It just seems odd that it will be a first for Bailey, until you remember that he has been on the disabled list for the last three openers because of elbow problems.

If Reds fans are looking for something to be enthusiastic about this season, aside from an everyday lineup that’s pretty good around a Hall of Fame-caliber hitter named Joey Votto, look no further than Castillo.

Castillo was dazzling at times last season, leading all National League rookies in ERA and opponents’ batting average (.202). His two-seam fastball is devastating and it has looked sharp this spring, in spite of his rocky start Sunday (five innings, four earned runs, seven hits). His spring ERA shot up to 4.73 after that. But Castillo has the demeanor of an ace on the mound.

Like Castillo, Mahle had an impressive major league debut, albeit brief. He made four starts last season with a 2.70 ERA. He has been equally impressive this spring, with a 2.75 ERA in 19 2/3 innings with 15 strikeouts and three walks. Mahle relies mostly on his four-seam fastball, but is refining his slider and changeup to complete the arsenal.

Unlike Castillo and Mahle, Romano’s debut last year wasn’t all rainbows and unicorns. He went 5-8 with a 4.45 ERA with 73 strikeouts, 37 walks, and 9 homers in 87 innings. The New York native is a bulldog on the mound, especially when his sinker’s working. Romano has a 3.00 spring ERA with 18 strikeouts in 15 innings.

Reed, who impressed Price in camp, was recalled from Louisville Thursday to start the fifth game of the season on April 2. The club didn't expect to need a fifth starter until April 9, but when Opening Day was rescheduled, it eliminated an off day for Bailey.  Price said Reed, who struggled on the big-league mound the past two years, was the most improved player in camp, though his numbers didn't say so (0-2 with a 5.11 ERA). 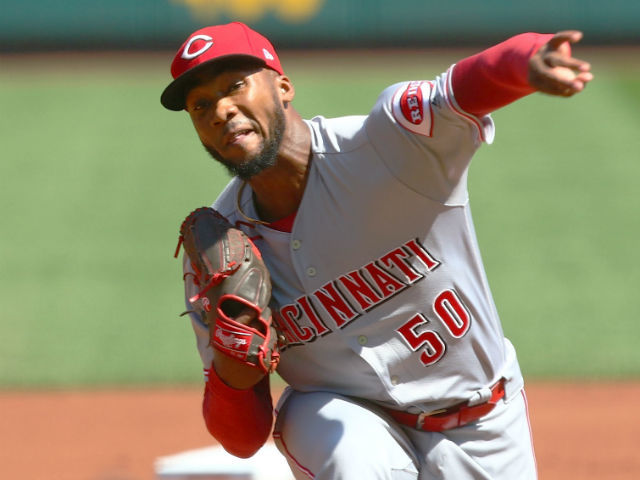 There’s a home for Amir Garrett and his dominant slider on the Reds’ roster. He will start the season in the bullpen, but don't be surprised if he joins the rotation at some point. In his first three career starts, Garrett showed some of the best stuff of any of the Reds’ young pitchers, striking out 21 in 19 2/3 innings. Then the wheels fell off for the former St. John’s University basketball player, who later struggled with his command at Triple-A. The lefty has had a strong spring with a 3.18 ERA and 21 strikeouts in 17 innings.

Any way you look at it, the experience those young guys got last year could prove to be invaluable. Right-handers Castillo and Mahle solidified their spots on the big-league roster last year.

Lost in space, meanwhile, is Robert Stephenson, the former first-rounder who pitched his way out of consideration for an Opening Day roster spot with a 7.71 ERA in five appearances. So far, he represents how some young pitchers fail to live up to their promise.

Mahle, Romano and Reed will get the ball out of the gate because there's no telling when projected starters Anthony DeSclafani and Brandon Finnegan or Michael Lorenzen will be ready.

Just when it appeared the Reds’ rotation would be as healthy and stable as it has been in several years, spring injuries to that trio created more questions about their readiness and overall reliability.

So, what does this all mean for the Reds this season, in terms of on-field success?

Stability could help the young pitchers develop and improve over the course of the season, and knowing the innings are theirs will help them settle into a routine.

Sheer attrition could strengthen the bullpen.

And, Reds fans might know the players without a program, for once.

While the progress still could be slow with plenty more bumps in the road, it’s better than the past alternative.

The parade of rookies marching in from Pensacola and Louisville has slowed.

Over the past two seasons, 29 players made their major league debuts for the Reds, the most of any team in baseball. Of the 17 players who debuted for them last season, 11 were pitchers.

The Reds’ roster on Opening Day 2017 was the youngest in baseball. Due to injuries and attrition, rookie pitchers started 33 of their final 40 games.

The Reds used 16 starting pitchers last season, tied with the Minnesota Twins for second-most in the major leagues, one behind the Seattle Mariners.

Reds’ starters accounted for a major-league low 57.3 percent of their total innings pitched, taxing a bullpen that led the majors in walks and hit batters and led the NL in runs allowed.

The Reds insist the rebuilding process is not yet finished, but the expectation this year is for there to be improvement in the win-loss column, and it’s fair to expect that Price will be evaluated as such.

In a division largely controlled by the reloaded Cubs and improved Cardinals and Brewers, the Reds and Pirates would seem destined for a cellar battle.

But, while Reds fans eagerly anticipate the debuts of Hunter Greene and Nick Senzel, at least they don’t have to suffer through Jason Marquis.