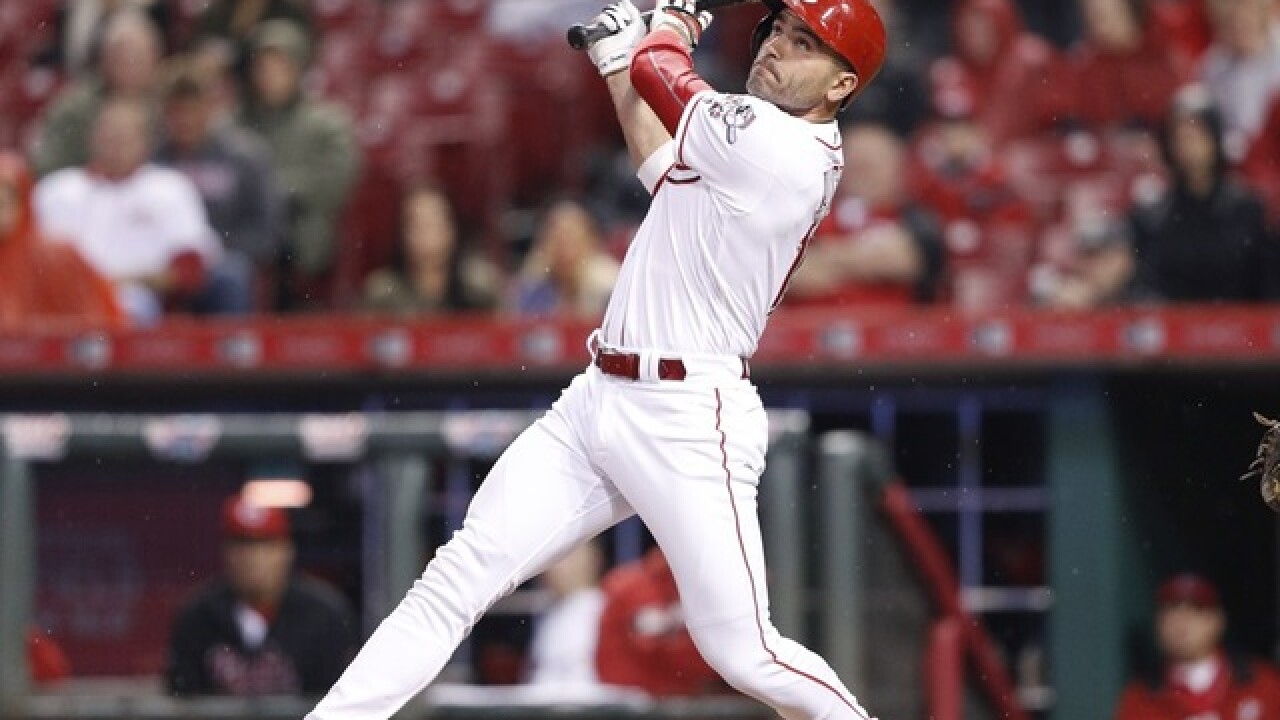 Joe Robbins/Getty Images
<p>Is Joey Votto a future Hall of Famer? Maybe, but he'll need to keep putting up big numbers for years to guarantee a trip to Cooperstown. After Ken Griffey Jr., the prospects for a Red to be inducted any time soon — maybe for decades — are bleak.</p>

EDITOR'S NOTE: WCPO is looking back on Ken Griffey Jr.'s life growing up in Cincinnati, stunning success and Hall of Fame career. See all of our coverage at WCPO.com/griffey. Watch Sunday's ceremony at 1:30 p.m. ET on MLB Network or www.baseballhall.org.

CINCINNATI — If you think the hunt for Reds October is dormant, how about the hunt for future Reds in Cooperstown?

Unless Joey Votto has a second-half career in his 30s to rival Frank Robinson’s, or Johnny Cueto can channel Tom Glavine’s ages 31-41 seasons, it’s going to be at least another quarter century — and perhaps more like three decades — before a longtime Reds player is enshrined in the National Baseball Hall of Fame.

Even that long a drought could become longer if the Reds can’t find the next Mike Trout or Bryce Harper pretty soon. Because there’s not exactly a young Johnny Bench in the Reds farm system, you know what I’m sayin’?

This coming weekend is Ken Griffey Jr.’s moment in Cooperstown. The induction ceremony will have a heavy Cincinnati flavor given that Griffey was raised here and starred at Moeller High School, played nine seasons with the Reds (2000-2008) and will be feted by his father and Senior’s famous Big Red Machine teammates.

Junior’s greatest years were in Seattle (1989-1999). He went on the ballot late last year and was elected to Cooperstown by 99.32 percentage of the vote, a Hall of Fame record that eclipsed the 98.84 percent of another “second-career” Red, Tom Seaver. Griffey will be enshrined with Mike Piazza, the former Los Angeles Dodger and New York Met, in Cooperstown on Sunday. Griffey will go in “wearing” a Seattle Mariners’ cap. So it’s more of a Seattle than a Cincinnati affair.

Not since the 20 seasons between Eppa Rixey in 1963 and Frank Robinson in 1982 (Robinson went into Cooperstown “wearing” a Baltimore Orioles cap on his plaque, but he played more games as a Red) have Cincinnati fans had to wait as many as 10 years for a Baseball Hall of Fame induction.

Waiting 30 years for a Hall of Famer may not seem inordinately long considering that only 1 percent of the players who have put on a major league uniform ever reach Valhalla. But consider this: In the 31 years covering 1982 through 2012, the Reds have put eight players or managers into the National Baseball Hall of Fame, more than any other club in baseball.

That’s a different type of Great Eight — the monicker of the Big Red Machine’s starting lineup — but it’s just as special. And Pete Rose would have made nine.

If it seems like we in Reds Country have been busy in Cooperstown the past three decades, it’s because we have been.

Tied for second for Hall of Fame inductees from 1982 through 2012 are the Giants and Orioles. (Yes, I gave them Frank Robinson; how could I not, with four World Series, two of them World Championships and a Triple Crown, not to mention that O’s cap on his head?).

Tied for fourth at six are the Yankees and Cardinals.

The only other clubs with a full handful of inductees from 1982 through 2012 are the Dodgers, Red Sox, A’s and Cubs.

Yes, we’ve been spoiled here in Reds Country. But we’re about to find out how other fans live when it comes to Cooperstown.

As electric as is Aroldis Chapman, if he’s going to make it to the promised land, the six-year Red (2010-2015) is probably going to have to find a way at least to play in a World Series if not win a ring or two. That’s because, of the last four relievers to make it to Cooperstown — Rollie Fingers, Dennis Eckersley, Bruce Sutter and Goose Gossage — only Sutter doesn’t have a ring (but did play in a World Series). And the biggest reliever of all — Mariano Riviera, first eligible in 2019 — is gold-laden.

True, Scott Rolen has a shot — 70 career WAR (wins above replacement) puts him clearly in the Cooperstown conversation — but he played only 3 1/2 seasons here (2009-2012) at the end of his 17-year career, and only the first half of his first full season as a Red (2010) was anything to write home about.

Reds players since 1876 that have been inducted into the Baseball Hall of Fame. All played more games for Cincinnati than any other team