Reds' Stephenson and Reed: To start them or not? 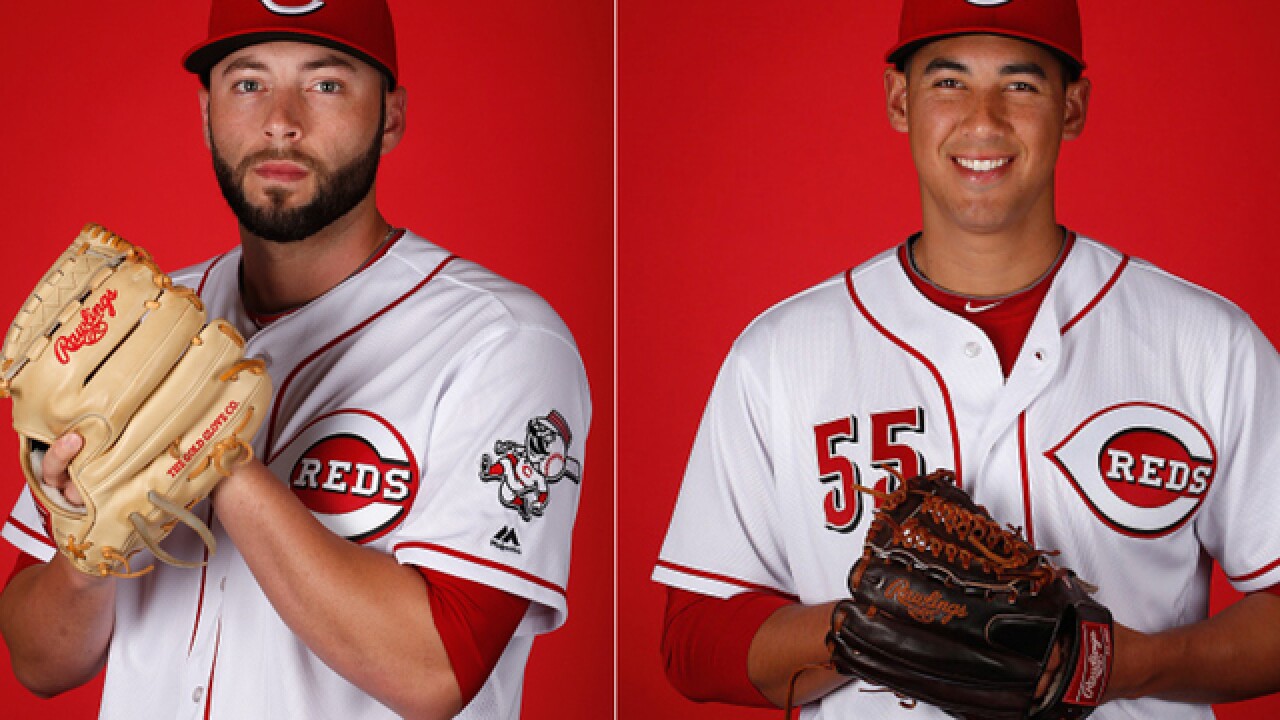 Getty Images
<p>The Reds may have a difficult decision to make when it comes time to pick the starting rotation. Should the club start the clock on young hotshots Cody Reed, left, and/or Robert Stephenson or go with a veteran placeholder when the season starts?</p>

It looks like the race for the Reds rotation is going to leave the club with a difficult decision to make.

It will come down to going with the best five for right now or going with the five that make the most sense for the long-term future of the franchise.

Do they start the clock on young hotshots Robert Stephenson and/or Cody Reed or go with a veteran placeholder when the season starts?

John Lamb and Homer Bailey were expected to be ready to join the fray shortly after the season begins.

DeSclafani and Iglesias were the locks. Lorenzen, Moscot and Finnegan were the favorites for the other three spots. Stephenson and Reed were the prospects nominally competing for spots, but the club clearly preferred to wait on both. Sanchez and Melville were Backup Plan A and B.

It hasn’t exactly played out as planned.

DeSclafani has been fine. Iglesias made his spring debut Monday after being held back because of shoulder fatigue late last season. He pitched an inning and is still on track — probably to make the fifth start of the season.

Finnegan, the left-hander obtained in the Johnny Cueto deal, has pitched well (5 2/3 innings, two runs on seven hits). Moscot had one good start and two really bad starts. Lorenzen, however, is dealing with a sore right elbow. He was to have an MRI. With Opening Day three weeks away, even if the diagnosis is good, it’s unlikely he’ll be ready to start the season.

It should be noted, however, that it’s never a good idea to make too much of spring stats. Jason Marquis had a 2.90 ERA over 31 innings last spring. Kevin Gregg pitched well enough early to win the main set-up role. We all know how that turned out.

So maybe the Reds still go with Moscot. Bryan Price has raved about the guy since last spring.

But even if they go with Moscot, DeSclafani, Iglesias and Finnegan, they’re still going to need another starter.

If you go with the best arm and the best performance in the spring, it’s either Stephenson or Reed. Stephenson has gone seven innings and allowed two runs on five hits. He’s walked one and struck out seven. That includes a “B” outing. Reed has gone eight innings and allowed one earned run on five hits. He’s walked none and struck out seven. Scouts were raving about him this spring before he ever pitched in a game.

Sanchez, the 34-year-old veteran, got knocked around severely in one of his outings. More troubling: He’s walked seven and struck out two. Melville got lit up Monday — four runs on five hits in 3 1/3 innings — and he’s put up so-so numbers in the minors the last two years.

If all things were equal and they continue to pitch well, Stephenson and Reed would both be in the rotation on Opening Day.

But money and contracts affect every baseball decision. If Stephenson and Reed start the year in the majors, their service-time clock starts. That means the Reds would potentially be giving up a year of control for both.

If a player gets 173 days of service time for a 183-day season, it counts as a full year. Teams control players for six years. The Cubs kept Kris Bryant in the minors for 11 days last year, delaying his free agency.

For the long-term future of the Reds, it would be wise to do the same thing with Reed and Stephenson.

But it’s not as simple as that. The Reds also have to give folks a reason to come to the ballpark this this season. I think fans have accepted the rebuild for the most part. But part of the reason they are buying in is because they’re excited to see the young players develop.

There are still three weeks left before Opening Day, so a lot can happen. But it’s looking like the Reds will face a tough decision with Reed and Stephenson.