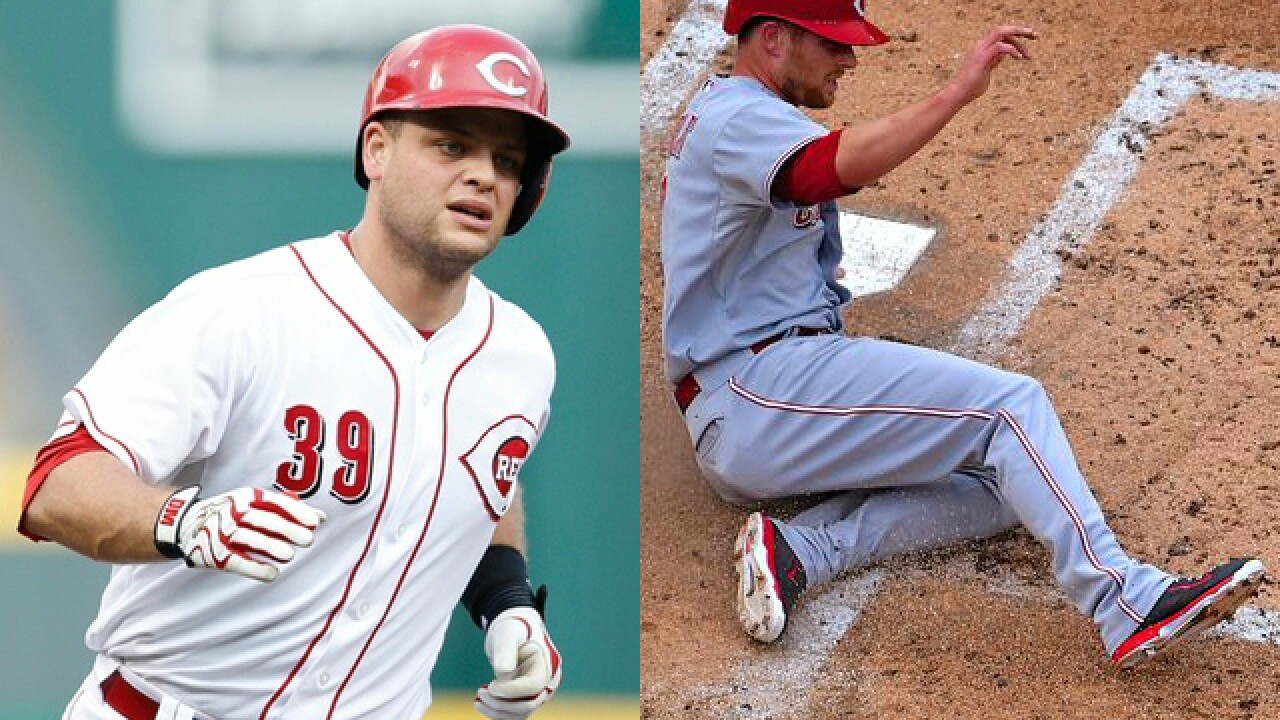 <p>Having Devin Mesoraco (left) and Zack Cozart (right) <a href="http://www.wcpo.com/news/insider/reds-are-counting-on-mesoraco-and-cozart-both-to-be-back-and-healthy-after-surgeries" target="_blank">both healthy </a>this year will have a lot to do with whether the Reds meet their modest expectations this year. Photos compiled from Getty Images</p>

Longtime Reds beat writer John Fay is breaking down nine key questions about the Reds. A story addressing one of the questions will run each day between now and Opening Day.

Question 4: Are Devin Mesoraco and Zack Cozart healthy and how much can we expect them to play this season?

CINCINNATI -- Any scenario involving the Reds doing anything positive this season started with the following clause: “If Devin Mesoraco and Zack Cozart are healthy...”

The Reds season started going south last year with Mesoraco’s hip issues in the first week. The season completely got off track when Cozart was injured in early June.

Both had major surgeries. Mesoraco had a procedure to correct impingement in his left hip on June 29. The impingement limited him to 23 games overall and only five behind the plate. Cozart had reconstructive surgery on his right knee on June 15.

Both faced long rehabs, and both came to spring training close to 100 percent.

“I honestly don’t have to think about it at this point,” Mesoraco said upon reporting. “If I have to block, I’ll go down and block. There hasn’t been any hesitation.”

“It feels like a normal spring for me,” Cozart said. “(The first day in), I did everything I would have done . . .  if I hadn’t gotten hurt. The only difference is I’m wearing a brace on my knee.”

Both Having Good Springs

The Reds held both Mesoraco and Cozart out of games until midway through spring to allow them to fully recover. (Mesoraco slightly longer because he had a setback). Both are having good springs. Cozart went into Monday hitting .300 with two home runs and five RBI in 20 at-bats. Mesoraco was hitting .444 with a pair of homers in just nine ABs. He hit a home run in the first at-bat of spring, by the way.

Both have played full games. Most of the regulars have about 35 at-bats at this point.

It remains to be seen what the workload will be once the season starts. Reds manager Bryan Price is hoping that Mesoraco will be a four-of-five-days catcher as some point in time this year.

“I can’t say that would start from Opening Day,” Price said. “I have no reason to say that is not a possibility. No one has given me any reason to be discouraged about his ability to get back and be a regular, primary catcher at this level of play. That’s our goal. Unless there is a reason for me to have concern, I fully anticipate him being the primary guy catching a lot.”

Jordan Pacheco remains in the running for a roster spot. He would give the Reds a third catcher along with backup Tucker Barnhart.

The Reds also have added depth at short. Cozart will be the every day shortstop. But the Reds got Jose Peraza, a natural shortstop, in the Todd Frazier trade. Peraza could make the club as a super utility type and spell Cozart.

Value In Their Bats

While Mesoraco and Cozart play important defensive positions, their value in the lineup, particularly in the case of Mesoraco, cannot be underestimated. Mesoraco hit .273 with 25 home runs and 80 RBI in 2014. Getting a bat like that back in the middle of the order would do wonders for the Reds.

Cozart was having a nice year last year when he got hurt. He was hitting .258 with nine home runs in 194 at-bats when he got injured.

Again, for the Reds to do anything this season, they need Mesoraco and Cozart back and healthy.

“I think we have the ability to surprise some teams,” Price said. “Because I do think we have an offense that’s going to be strengthened by Suarez being a year older, having Mesoraco and Cozart back . . . That, to me, is going to provide us with a nice regular lineup.”