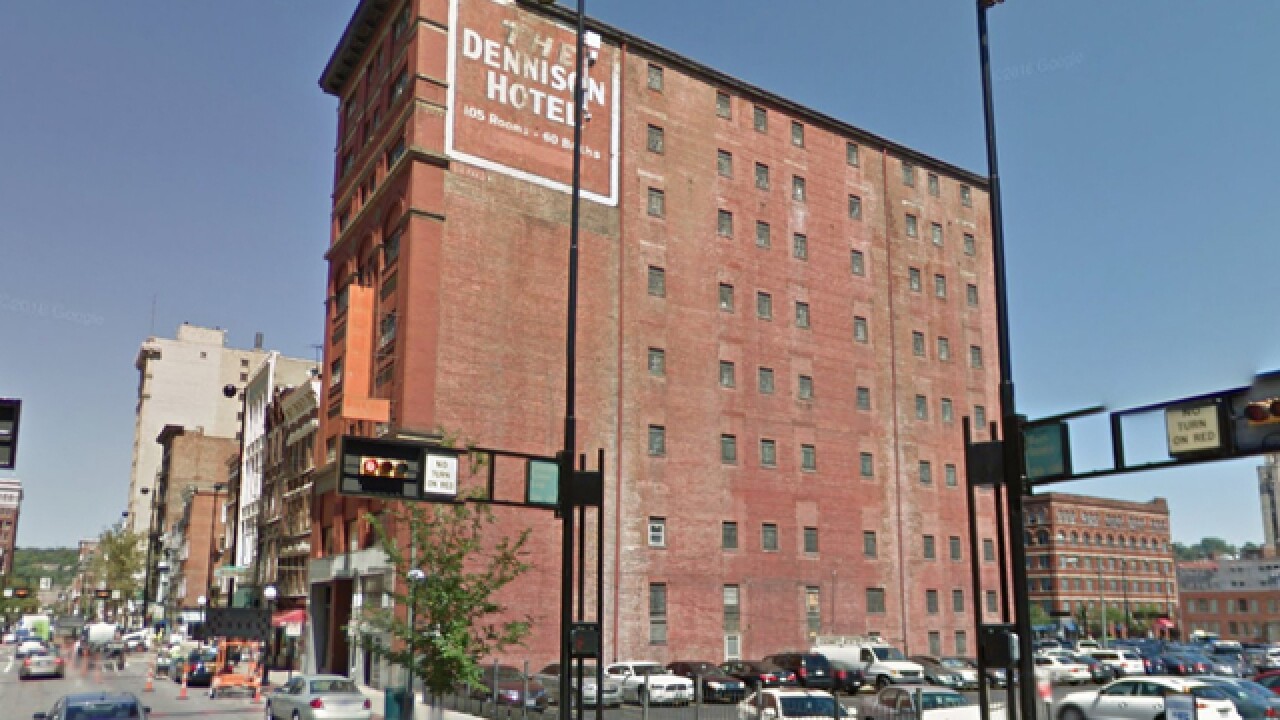 Google
Google Maps
<p>The Dennison Hotel, near the corner of Seventh and Main streets Downtown, would be demolished if its owner succeeds in getting permission.</p>

This is the last of three stories on the redevelopment of historic buildings in the Tri-State.

Tear down what’s there and build something new? Or restore what’s already there?

That’s the essence of frequent clashes between developers and preservationists who squared off again May 26 — this time over the fate of downtown’s Dennison Hotel on Main Street.

Although the special meeting of Cincinnati’s Historic Conservation Board lasted for about four hours, the board adjourned without voting on the owner’s request for permission to demolish it. The board is expected to reconvene soon to hear more testimony and, presumably, make a decision.

The owner, Columbia REI LLC, wants to clear the site for the construction of a project that may include an office tower and garage. Columbia REI, the real-estate arm of the Joseph Automotive Group, in the 1980s won permission to demolish buildings adjacent to the Dennison. Those properties remain undeveloped.

As might be expected in a city that has demonstrated some reverence for its history and the buildings that have become symbols of that history, Columbia’s plans were not universally embraced.

“Historic buildings grant character to communities. As the tangible link to our unique history and culture, they are irreplaceable,” according to the Cincinnati Preservation Association, one of the organizations that opposes the demolition.

The plan to tear down the former hotel isn’t the only proposal that alarms preservationists, though. They believe that bulldozers -- or, more passively, neglect -- threaten some key buildings in the Tri-State.

Led by the Dennison, here’s our Top 9 SOS — Save Our Structures — list for Greater Cincinnati:

1. The Dennison, 716-718 Main St., Downtown: “This historic structure, constructed in 1892, was designed by Samuel Hannaford. It is in imminent danger of demolition. Local advocates are strongly supporting preservation and reuse,” according to Columbus-based Preservation Ohio, which included the hotel on its 2016 Most Endangered Historic Sites list that was released last week.

Digging Cincinnati History and a variety of other sources say the building was originally constructed for the G. B. Schulte Sons Co. for its iron and steel business. Schulte operated there until about 1930, when two office-furniture companies announced that they would use the lower three floors while the upper floors would be converted into a hotel.

2. The Bavarian Brewery, 1200 Jillian’s Way, Covington: Kenton Circuit Judge Patricia Summe upheld the city’s decision to deny a demolition permit for a 100-year-old link to the city’s brewing history, a massive, high-visibility structure immediately east of Interstates 71/75 at the Marin Luther King/12th Street exit. The company that owns the building, Crestview Hills-based Columbia Sussex, had hoped to open a casino in the building if the Kentucky legislature had approved casino gambling. That never happened. The building’s long-range fate is far from certain because the company may appeal Summe’s ruling.

The Cincinnati Preservation Collective has been active in the opposition to the Columbia Sussex plans along with Covington’s Urban Design Review Board, which rejected the demolition request. The Cincinnati chapter of the American Institute of Architects also supports preservation of the building.

The opera house dates to 1891 and provided live entertainment until the late 1920s, when it was converted to a movie theater. In the late 1980s it became the second home of the Sorg-Whitewater Opera until that group folded about a decade ago.

In recent years, the nonprofit Sorg Opera Revitalization Group LLC has been working to restore the theater, and Middletown-area lawmakers have requested $1 million from the state capital budget to further the effort. The Sorg is also benefiting from another historic renovation: Hundreds of the seats being removed from Music Hall as part of that landmark’s $130 million overhaul are being donated to the Sorg. Plans are to sell the old Sorg seats to raise money.

4. King Records, 1536 Brewster St., Evanston: What is now a forlorn industrial building once housed the legendary King Records, the company created by Syd Nathan in 1943 that became one of the largest and most influential record companies in the country. When King opened its doors, it focused on country music — then known as “hillbilly” music — but it later broadened its offerings to include R&B, soul, rock and bluegrass. A long list of recording stars cut records at King, but it’s probably safe to say that the company’s biggest star was James Brown, the legendary “Godfather of Soul.”

Jeffrey A. Sackenheim, past president of the Cincinnati chapter of the American Institute of Architects and vice president of SHP Leading Design, did a lightning poll of some AIA members. They agreed that the building, which is not an architectural masterpiece, should be preserved. Its value to preservationists is in its cultural significance, not its form. In October, Cincinnati City Council put another barrier between the structure and demolition by granting it Local Historic Landmark status.

5. C&O Roundhouse, 14th and Neave streets, Covington: Architect Chris Meyer of Hub + Weber Architects in Covington and a member of the Covington Urban Design Review Board said he’s convinced that the old C&O Railroad roundhouse near 14th, Neave and Madison streets in Covington is “in dire need of a rehabilitation and adaptive re-use.” He said in an email that, “Nationally, there are not that many historic roundhouses remaining in urban areas. Most were demolished when (railroads) shifted from steam to diesel and the locomotive works were moved outside of urban areas, so Covington has a unique treasure. There's also a greater awareness of the value of historic industrial architecture — the roundhouse is a fantastic example of American Round Arch industrial style. The Duro company (which owns the property) has done a good job in keeping the building maintained as a working industrial facility, but the building clearly needs some care.”

6. Rabbit Hash General Store, 10021 Lower River Road, Rabbit Hash: Rather than restoration, the Rabbit Hash General Store in the tiny Boone County community of Rabbit Hash needs a rebuild after a devastating Feb. 13 fire leveled the iconic gathering place and tourist stop. The original portion of the store dates to 1831, according to Don Clare and the Rabbit Hash Historical Society. The preliminary estimate on rebuilding the structure is between $275,000 and $350,000, and a number of fundraisers have been held in an effort to raise money needed for the project, according to Clare’s chronicles about the fire and its aftermath.

The collective, which included it on its Impact Building list last year, said its importance is due, in part, to its location: “It sits atop the Sycamore Street hill and is wedged between Sycamore Street and Dorchester Street at the 5-way intersection with Auburn Avenue. The building towers over the street and is a prominent gateway into the historic Mt. Auburn neighborhood from downtown and Over-the-Rhine.”

8. A.E. Burckhardt House, 400 Forest Ave., Avondale: Like the Dennison Hotel, the Burckhardt (the name is often spelled without the “c”) house was designed by the renowned Cincinnati architectural firm of Samuel Hannaford and Sons. Built in 1887, the home has 10 bedrooms and seven baths and about 8,000 square feet of living space. Two years ago, the owner of the property proposed demolition so that the land could be used for an assisted-living facility or a nursing home. That proposal never got off the ground. The Preservation Collective and Preservation Association both have been active in trying to save the building, which is overgrown with trees, bushes and weeds.

9. Crosley Building, 1333 Arlington St., Camp Washington: Sackenheim and some colleagues he contacted identified this huge (330,000 square feet) industrial building as one that’s worthy of preservation. The eight-story building, with a tower that extends to 10 stories, was built as a manufacturing facility for the radio, automobile and refrigerator operations of Powel Crosley Jr., the legendary Cincinnati inventor, industrialist and entrepreneur who owned the Cincinnati Reds for many years. The building opened in 1930, a year after the onset of the Great Depression. Until World War II, studios for Crosley’s radio stations, WLW-AM and WSAI-AM, were on the eighth floor, and the tower housed Crosley’s offices. An Indianapolis development firm said two years ago that it planned to transform the building into apartments. From all indications, nothing has happened at this bleak industrial site since that announcement.