Read a good book lately? At UC's Edible Book Festival, you might get to eat it, too 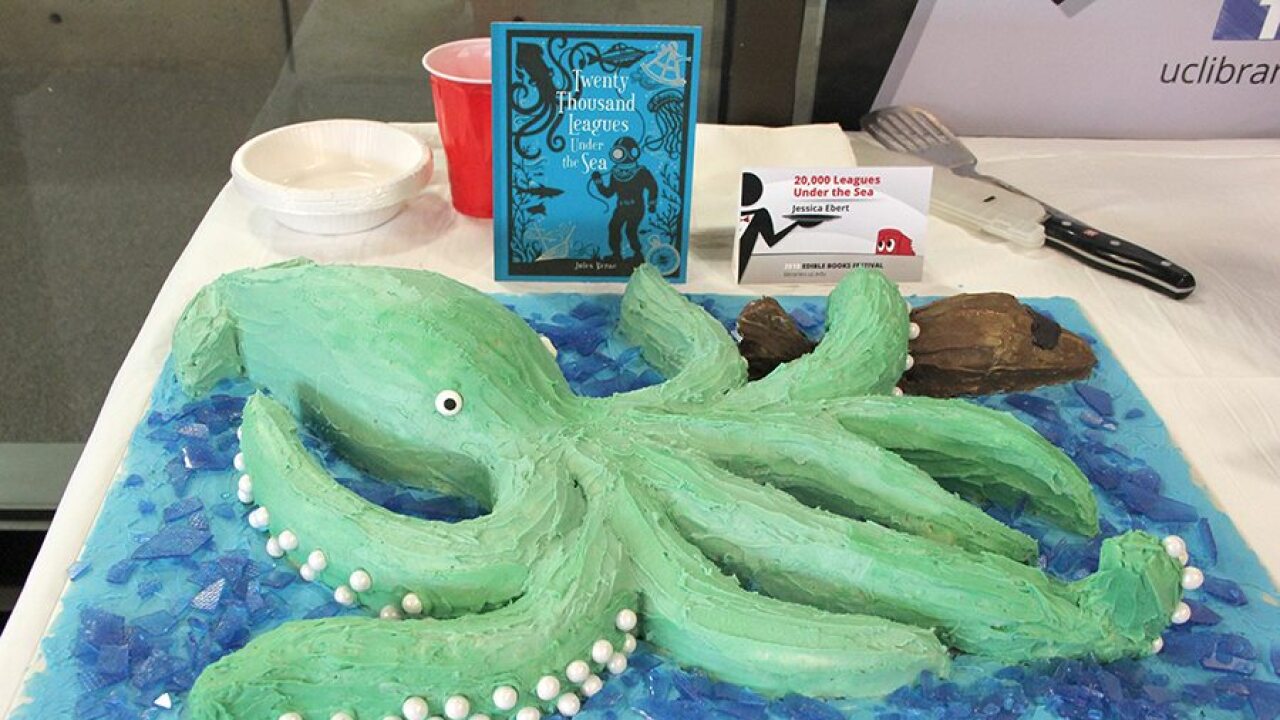 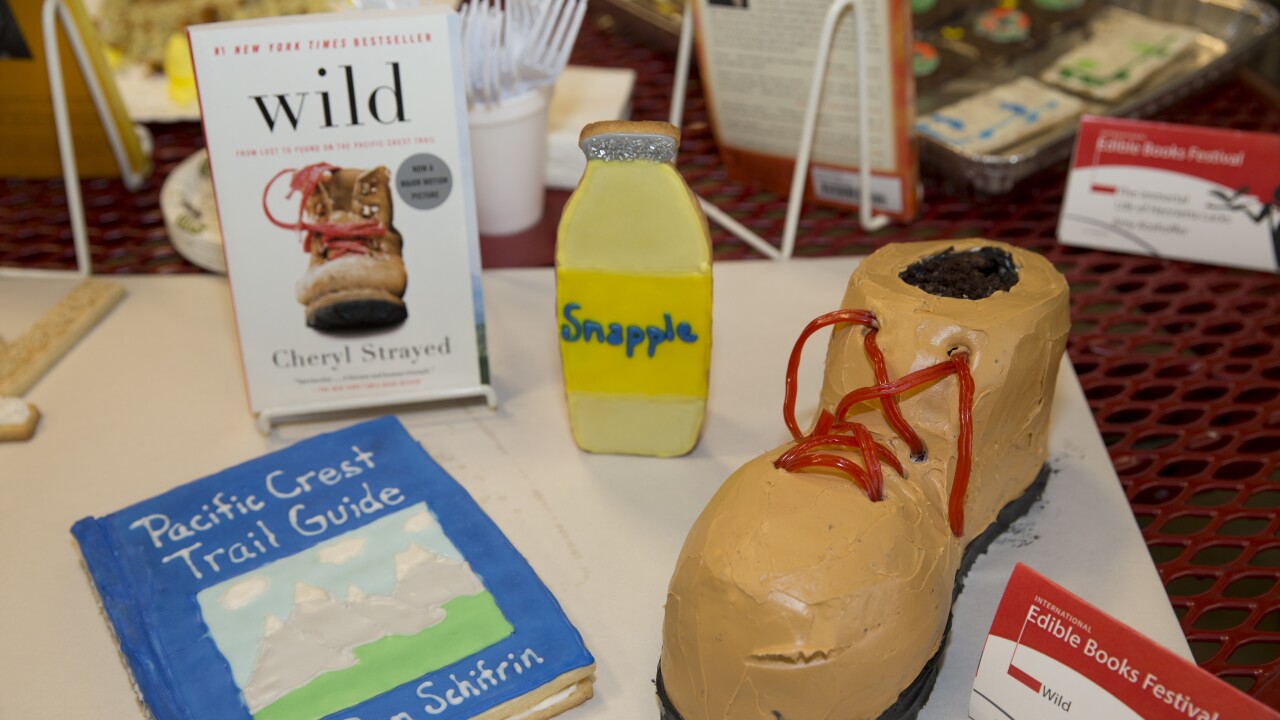 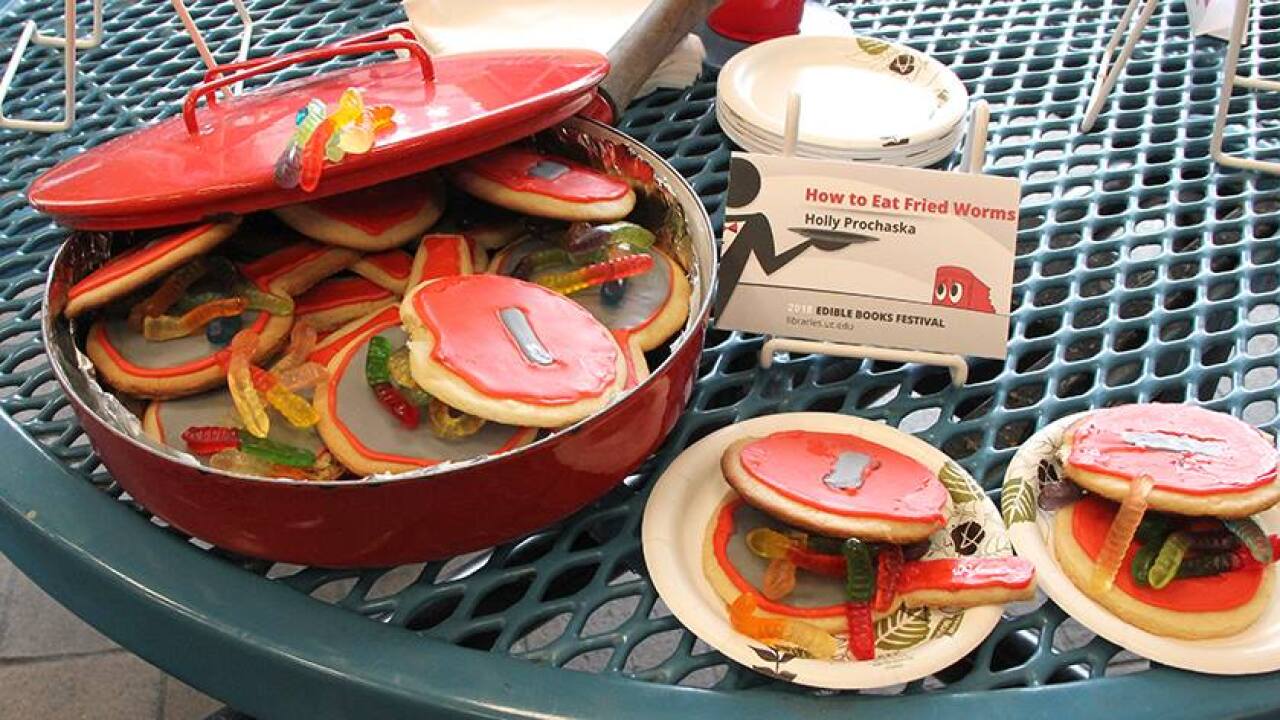 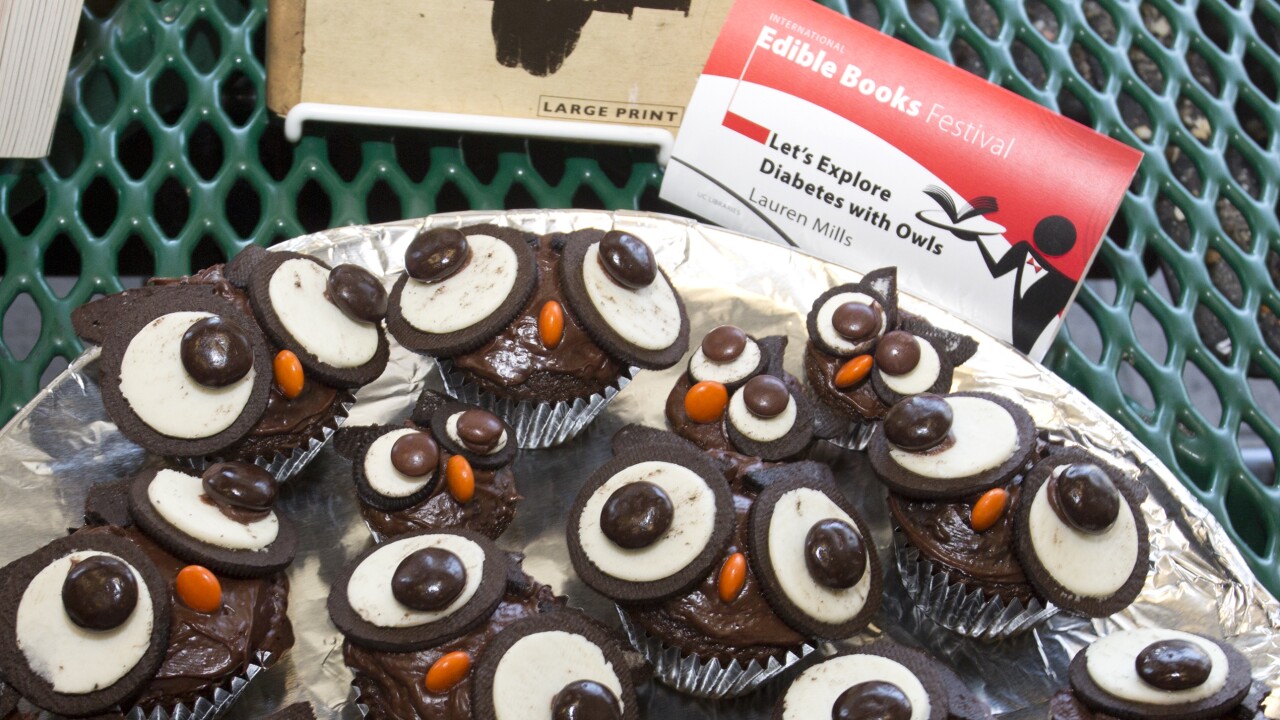 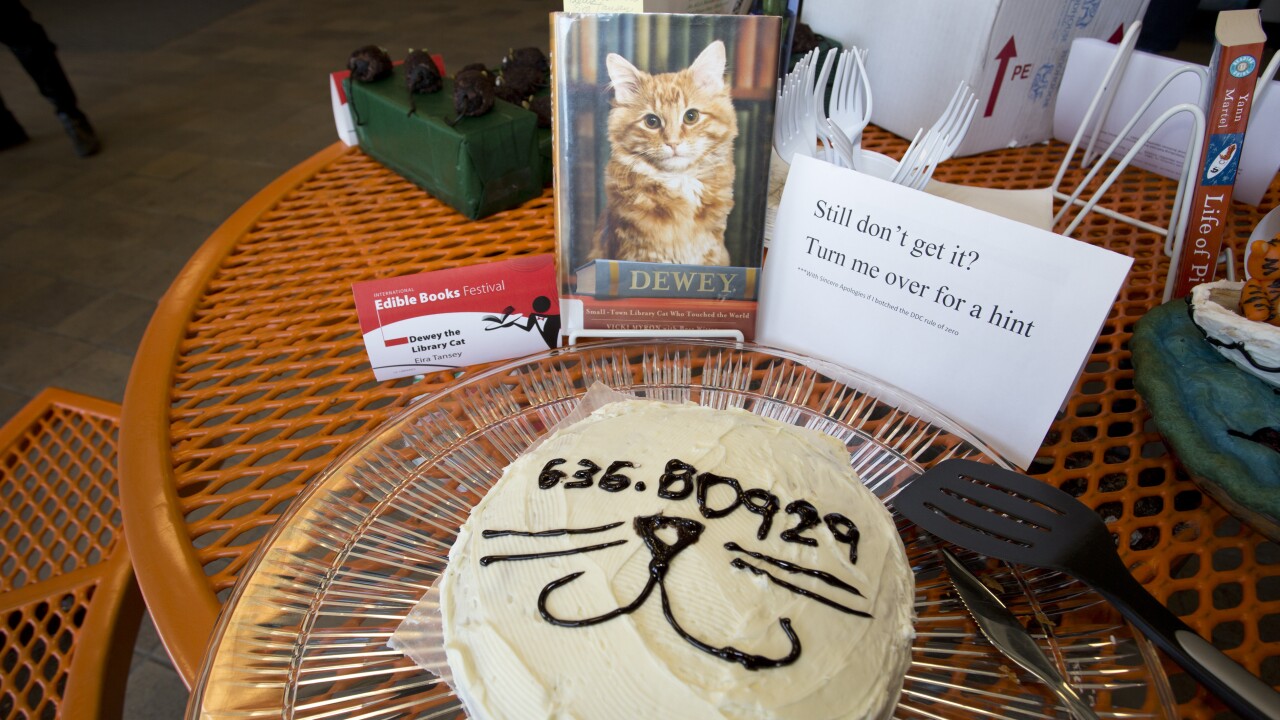 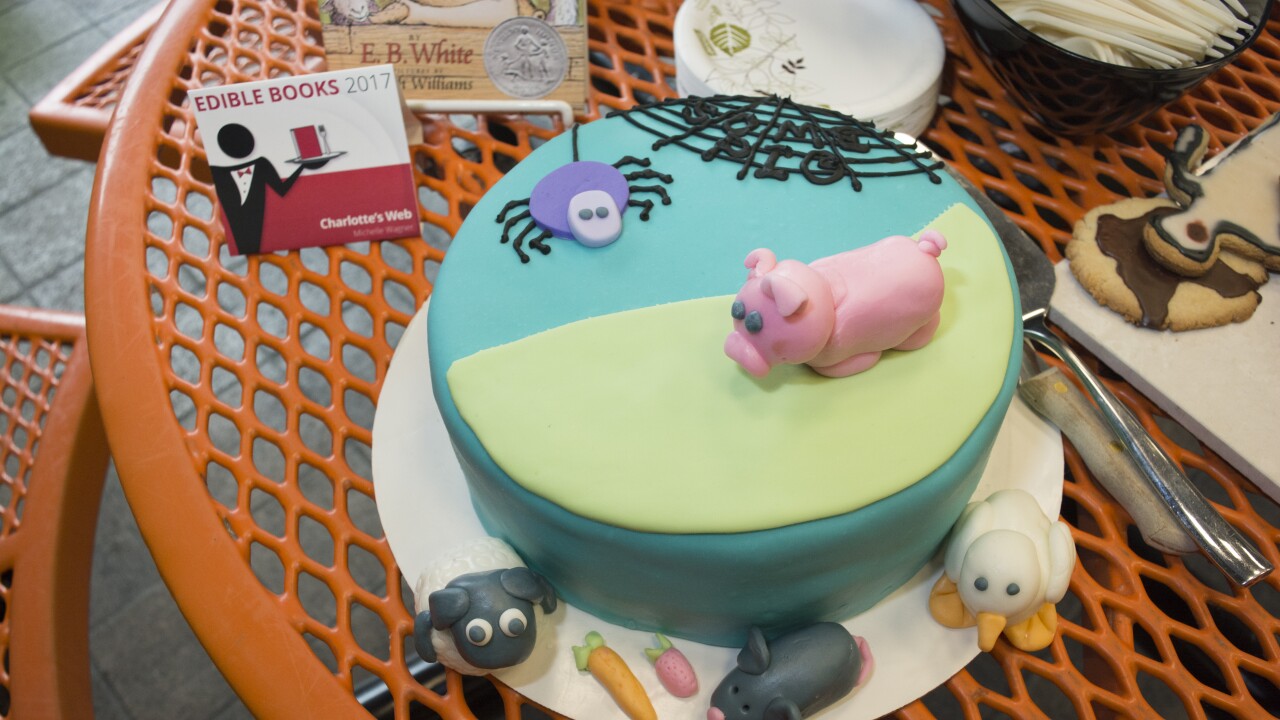 These books are good enough to eat.

And that’s what you’ll do at the International Edible Books Festival: consume good books figuratively and literally.

The University of Cincinnati Libraries will hold its 11th version of the festival 1-2 p.m. April 1 in the fifth-floor lobby of the Walter C. Langsam Library on campus at 2911 Woodside Drive.

At this year’s event, more than 20 participants – UC students, staff and staffers’ family members – will present edible creations that represent a book in some form. The festival is free and open to the public.

“When we first started, it was for staff and students only,” said Director of Library Communications Melissa Norris. “It was a student favorite and the event started getting a lot of attention on social media so we decided to open it to everyone.”

Norris said that a recent slideshow on Facebook previewing this year’s event has received more than 250,000 views.

“People from all over really love to see what everyone comes up with,” she said. “We’ve even had other institutions call us for help on planning their own event. So many libraries do the festival across the country and around the world.”

According to the International Edible Book Festival website, librarian and artist Judith A. Hoffberg initiated the edible book during a 1999 Thanksgiving celebration with book artists.

Norris said it became an international celebration in 2000, when artist Beatrice Coron launched the Books2Eat website. Traditionally, the event is celebrated on April 1, April Fools' Day, to mark the birthday of Jean Anthelme Brillat-Savarin, a French lawyer and politician who became famous for his book, "Physiologie du gout" (The Physiology of Taste).

There are only a few requirements in creating an edible book, Norris said, namely that the creation be edible and have something to do with a book.

“Some really get into the competition and submit very intricate and very impressive pieces,” Norris said. “It’s really a fun time. I do an entry each year and I always joke I set the bar low. I’m truly amazed by the craft and creativity of others at this event.”

Submitted entries include edible titles such as "Food: A Love Story" and “A Series of Unfortunate Cupcakes.” Best sellers "The Life-Changing Magic of Tidying Up" and "The Haunting of Hill House" are represented alongside classics like "Middlemarch," "Where the Red Fern Grows" and "Alice’s Adventures in Wonderland," among other literary greats.

Last year, Jessica Ebert had the top entry, inspired by "20,000 Leagues Under the Sea." Ebert, a conservation tech and conservation photography specialist at UC, is also an avid baker.

Every year before the festival, Ebert takes to Facebook to get book suggestions from friends.

“Usually that sparks something,” Ebert said. “I then brainstorm and visualize. Cake is one of my main materials. Last year I came up with this massive cake piece because I thought it would be so cool to do the squid from '20,000 Leagues Under the Sea' holding the Nautilus.”

“I tend to do classic novels,” she said.

Ebert mapped out a template and made several lemon poppy seed sheet cakes. She spent 20 hours baking, cutting and carving the cake pieces.

“I enjoyed every minute,” she said. “Baking relaxes me and the festival pushes me to be even more creative. I love working with my hands and thinking of interesting flavors and designs."

According to Ebert, the festival is the perfect way to celebrate reading.

“When I start an edible-book entry, I get an image in my head of what I want,” she said. “That’s really what reading does.”

Ebert said some of the creations are “astonishing,” but you don’t have to be an extreme baker to participate.

“People really have fun with the titles and are creative,” she said. “One year a student did the 'Invisible Man,' with empty plates.

Another year, someone did “The Three Musketeers,” Norris said, with three candy bars of the same name.

“This is a fun way to promote reading and literacy,” Norris said. “If you make reading relatable and fun, it’s not as intimidating. People start to see reading in a different way.”

Entries will be judged in categories such as "most literary," "most delicious," "most hilarious" and "most gruesome." The top student entry and best overall entry winners will receive a limited-edition UC Libraries T-shirt.

Attendees are allowed to eat entries after the judging ends.