Raised by humans, the Cincinnati Zoo's Walter the warthog must adjust to living with animals 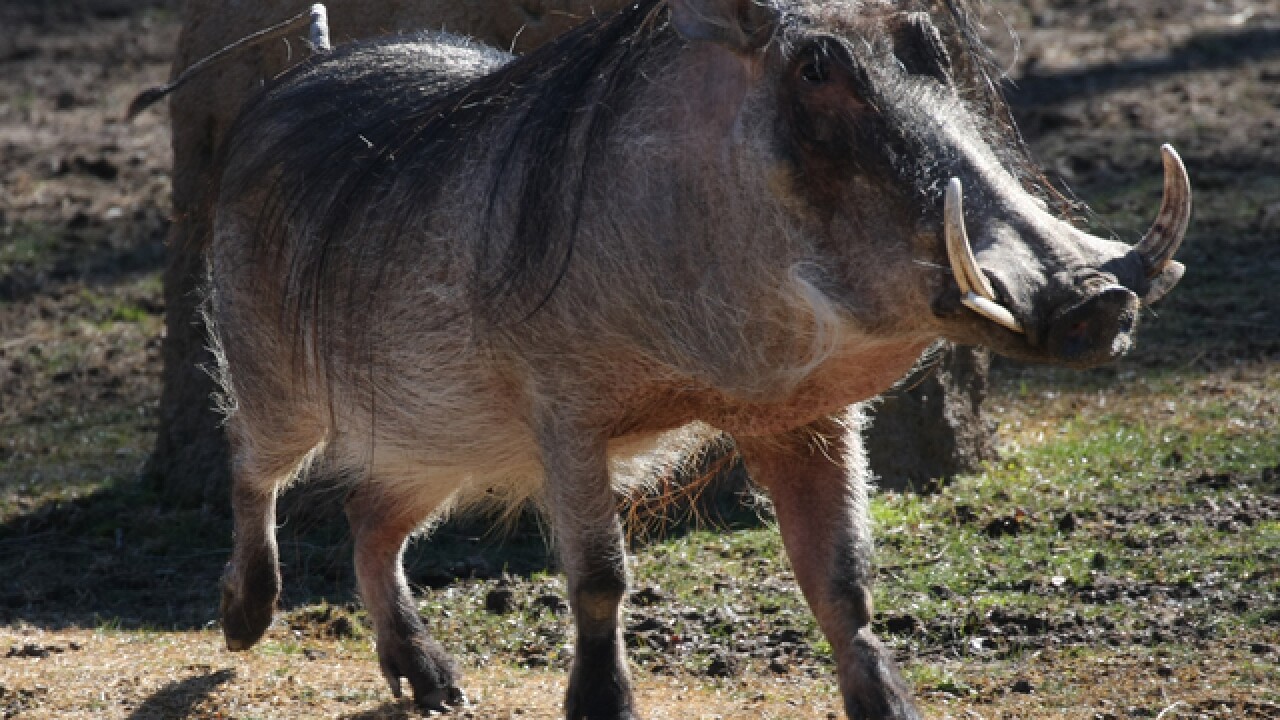 CINCINNATI -- Anyone who's gone to a new school or started a new job knows it can be a challenge fitting in. So when Walter the warthog recently relocated from Wildlife Canyon to the multi-species Africa Exhibit , caretakers at the Cincinnati Zoo & Botanical Garden wanted to ensure the move went as smoothly as possible.

"Walter was hand-raised by humans and feels really comfortable with people, so he started out as an ambassador animal," communications director Michelle Curley said. "But he got so big and strong he was literally dragging his handlers along when they'd go for walks around the zoo."

Although Walter was perfectly content living as the sole warthog among his human herd, Turoczi said, his caretakers decided the warthog would better benefit from interaction with a variety of new animal species. Since warthogs hail from Africa, he said, the move seemed like the perfect fit.

"Warthogs are social animals, and Walter's group when he was younger was people," he said. "So we kind of have to redirect and teach him, maybe this isn't a warthog or a person, but it's something you can be friends with."

Introducing animals to live and interact together is a complex process Turoczi said. In the case of Walter, the warthog first took residence behind the scenes, where he shared 'howdy holes,' which allowed him to smell and see his next door neighbors. Turoczi said keepers then paired Walter with other animals in separate enclosures outdoors so the new acquaintances could fully assess each other. He said the staff initially hoped Walter would bond with Mike, the lone wildebeest, but Mike immediately started alarm calling to warn other animals when he saw the new, scary visitor.

"The first time Mike saw him, he was so put off and scared we had to add the impala and gazelle so he had his comfort group to give him his security blanket," he said. "We wanted Mike to know, okay, you're not alone, you're with your herd, this is okay. We always read behavior to keep things positive."

The most definitive meeting allowed Walter to roam freely with other animals in the yard, Turoczi said. At first, Walter would immediately run to his human herd for protection, but with continuing encouragement and positive reinforcement, Turoczi said, the warthog's becoming bolder every day. He said Walter held his own when Hobbes the greater kudu curiously meandered over to check out their newest resident.

"We don't want him to need us to be happy all day," Turoczi said. "We want to distance ourselves and encourage and teach him other ways to feel safe and comfortable. So if he buddies up with one of the other animals out there, that's amazing. If he's comfortable enough to be out there by himself and he's a strong, independent warthog, that would be awesome too."

The greatest hindrance in assimilating Walter so far has been the weather, said curator of mammals Christina Gorsuch. Since many animals can't tolerate the frigid temps, she said, they've had to exponentially slow down the process.

"It's not Walter or the dynamics of the group at all," she said. "So the next time we do have a break in the weather, they're all going to go outside together."

The goal for the summer is to have 13 different species sharing the Africa habitat. Exhibits like these, which allow animals to interact the way they would in the wild, are becoming more prevalent at zoos, Gorsuch said.

Because caretakers can enter the exhibit, she said, visitors can watch special feedings, enrichment activities and training. Although limited space and seasonal weather prohibit the zoo from having an expansive savannah where larger herds can roam, she said, the smaller habitat provides more intimacy for visitors.

"So I think that's what makes our exhibit interesting. You get to see more species than you would normally get to see in these types of exhibits. It's less quantity, but a more diverse group."

Some of the solitary animals in the Africa Exhibit came to the Cincinnati Zoo because they had issues at their previous locations, Turoczi said. In the case of Mike, he was the smallest wildebeest, and others in the herd constantly picked on him. The new stork due to join the exhibit Turoczi compares to Luna Lovegood from the Harry Potter books -- the bird seems to carelessly wander around in her own world. And, he said, Walter the warthog thinks he belongs to a human herd.

"This habitat to me is kind of like the Island of Misfit Toys, but it's for animals," he said. "We get a lot of animals that had issues somewhere else. We'll try them here and it works really well. It's probably like all the weird kids who end up comforting each other's struggle and figuring out they're all okay."

The last animals to be introduced to Walter will be the ostriches and vultures, but Gorsuch predicts all will go well. In terms of Mike and Walter's somewhat strained relationship, Gorsuch said that although they're not best buddies, Mike has become far more comfortable around the newcomer. She said the wildebeest keeps his distance, but no longer retreats the minute he sees Walter.

"Mike just kind of stands and watches him with a very wary and guarded look," she said. "But he doesn't spook or anything anymore when Walter moves fast. He's just like, 'I don't know what to think of you.' Our other thought and mutual feeling is when there's more space and more of them, the ones that want to interact with each other can, and the other ones can go their own way."