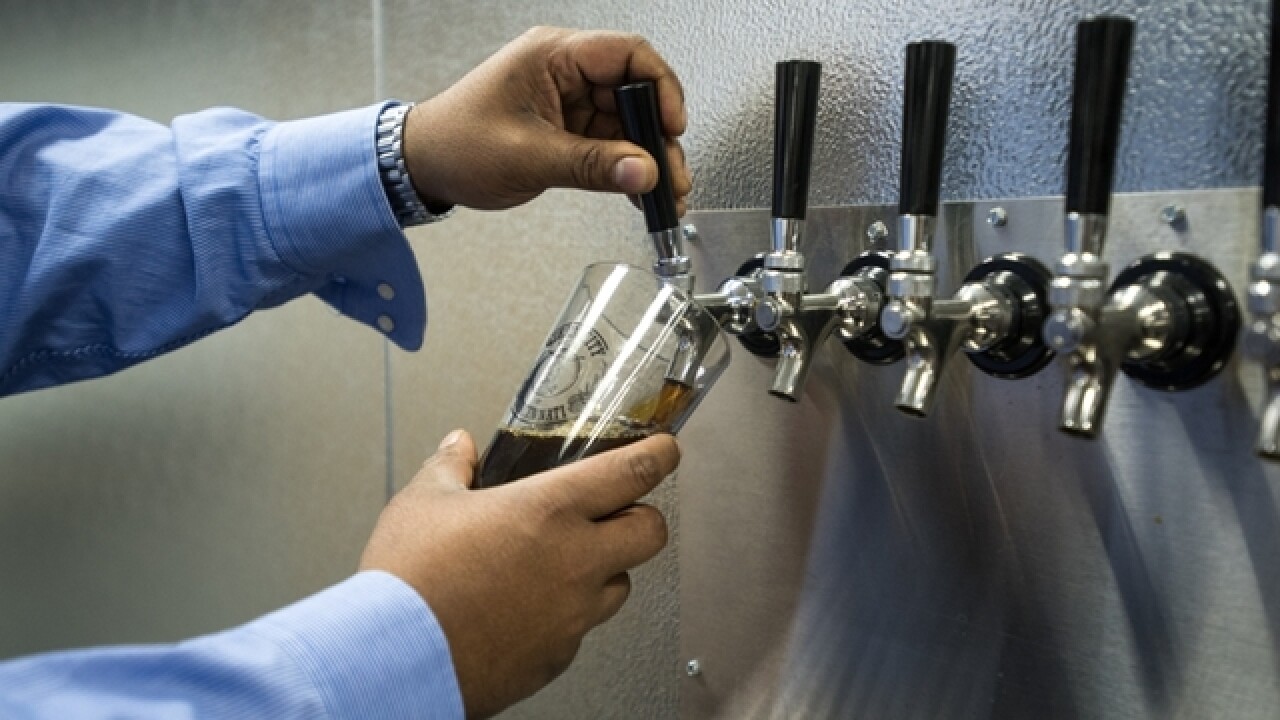 BLUE ASH, OHIO -- Queen City Brewery of Cincinnati's opening on Dec. 30 will mark the end of a nearly three-year journey of trial and error for its four owners.

"We did all of the work ourselves," said Mike Wofford of the brewery he started with his brother Marquis, friend and head brewer Jason Surniak and a fourth, silent partner. "This is like my dream man cave."

The owners remodeled the brewery, located at 11253 Williamson Road in Blue Ash, themselves. They tore down walls to make space for a 1,200-square-foot taproom filled with a foosball table, darts, giant Jenga, a digital jukebox, seating, televisions and Cincinnati-themed paintings by local artists.

They even made the Ohio-shaped wood table tops that sit near the polished metal bar with the brewery's logo painted on it.

Behind the bar they installed a row of tap handles. Four of them are connected directly to brite tanks that sit in a walk-in refrigerator. Those tanks will supply Queen City Brewery's black IPA, regular IPA, scotch ale and nut brown ale for sale by the glass from 4-10 p.m. on opening night and again from noon-1 a.m. on New Year's Eve.

In another room is Queen City Brewery's brewhouse, which consists of three barrels and four 126 gallon-capacity fermenters. The brewhouse is adding four new glycol-lined and temperature-regulated fermenters this spring.

The owners, now in their 30s, had no experience with running a small business or commercial beer making when they came up with the idea for the brewery in January 2014.

Mike Wofford was working at Enterprise Rent-A-Car. Marquis was stationed in Colorado Springs while serving in the United States Air Force. The brothers, who grew up in Cincinnati, often talked about their love of Colorado's craft beer. During a visit with his brother Mike Wofford said that talk grew serious.

"So, I was like, 'Why don't I go back to Cincinnati, get some people together and we'll open a brewery?'" he said.

Mike Wofford then contacted Surniak, who homebrewed for eight years, and asked him to join their venture.

"We've had to seriously look into fine tuning our craft," Surniak said after the group started working on the brewery in earnest.

Surniak spent countless months perfecting Queen City's recipes and improving as a brewer. The group also underwent a lot of on-the-spot learning when it came time to pick location, structure financing and then put equipment together.

"There's so much to think about," Mike Wofford said. "We've self-funded and had to find the place that has the right draw for us and make sure we thought it was a good fit."

The easiest part of the startup process might have been settling on the Queen City Brewery name.

"We just have a really deep love for the city," said Mike Wofford, who has a tattoo of Ohio and 513 written in Roman numerals on his forearm. "We really like to be part of the community."

The owners, who have other full-time jobs, are still deciding the days and hours the taproom will be open after the grand opening. Those times will be announced on the Queen City Brewery's Facebook page.

After they ramp up beer production in a couple of weeks, the brewery will also offer growler service.

Surniak said he hopes to add another ale to the brewery's lineup soon. He added his philosophy on future brews is one that reflects the evolution of Queen City Brewery itself.

"I always think beer should be about having an experience; the joy about going on that adventure," he said.