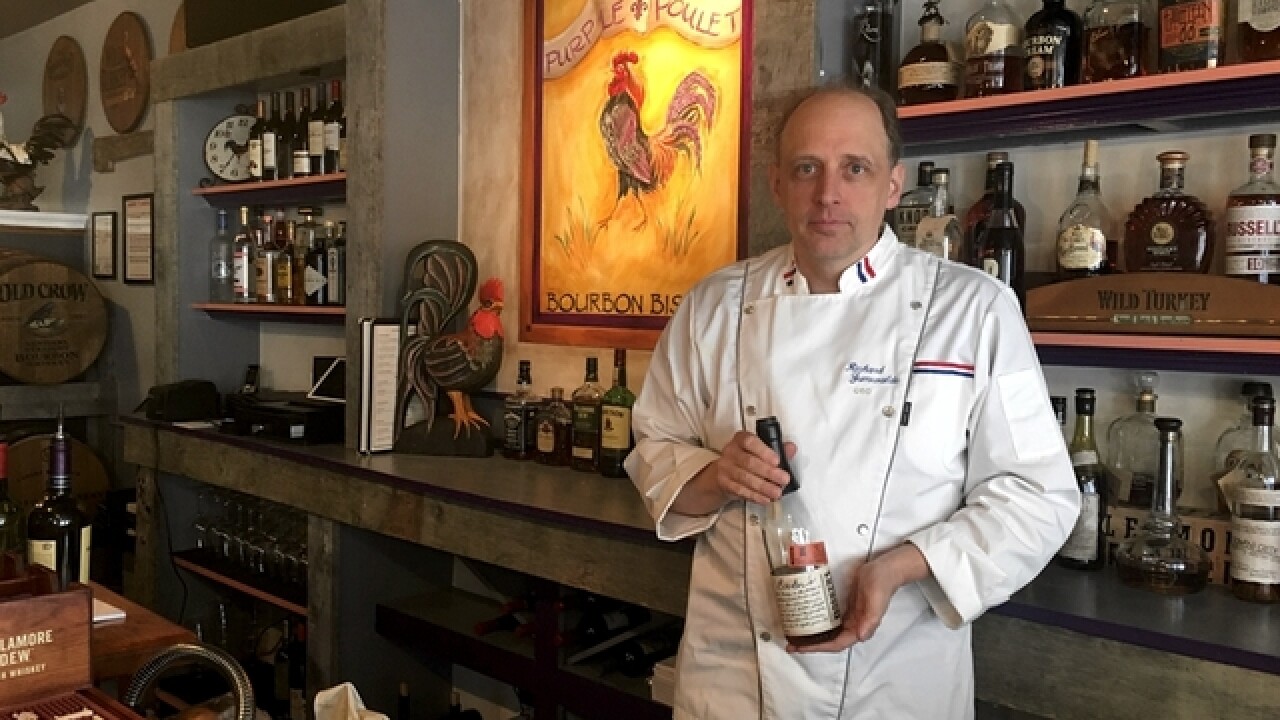 Brian Mains
<p>Rich Zumwalde opened the Purple Poulet in Dayton, KY in March. He describes his restaurant as a "bourbon southern bistro."</p>

DAYTON, Ky. — Rich Zumwalde has reached a point in his decades-long cooking career where he no longer focuses on what is cool or trendy.

When the executive chef opened the Purple Poulet at 603 Sixth St. in Dayton, Kentucky, in March, his intent was to celebrate the things he enjoys — from Kentucky bourbon to French-influenced cuisine from New Orleans and Charleston, South Carolina.

“I’m calling it a Southern bourbon bistro,” Zumwalde said of his restaurant. “I kind of coined that term."

The chef points to the “Swamp Critters Provencale” as an example of the culinary concepts he is experimenting with in his 65-seat restaurant. Rather than serving fried frog legs as an appetizer, Zumwalde cooks them in a skillet and adds in shrimp, crawfish, pernod, garlic, tomato and capers. The restaurant also offers its own take on freshly baked biscuits, oysters, a New Orleans-inspired turtle soup, Southern fried chicken, and hot brown and po'boy sandwiches.

Zumwalde said the menu was inspired by places he worked, including the Cincinnati Club and Banker’s Club Downtown, the former Quality Inn restaurant in Covington and the Beaumont Inn in Harrodsburg. He perfected the fried chicken on the Purple Poulet’s menu at the Milan Railroad Inn as owner and executive chef from 1990 to 2008. (Poulet means chicken in French.)

“The fried chicken is a carryover from there,” Zumwalde said, adding that people would drive an hour from Cincinnati to the Milan, Indiana, eatery just for his chicken.

Other elements Zumwalde either incorporated or plans to soon have roots dating as far back as his first chef job at the Elms, a long-defunct Downtown restaurant. Zumwalde said the restaurant utilized farm-to-table ingredients and experimented with French-inspired dishes.

“Of all the chef’s jobs I’ve done, that was the most fun,” he said. “Anyone who appreciates cooking has to go back to the classic French. The restaurant was ahead of its time.”

The bourbon served in Zumwalde’s bistro is more of a personal than professional touch. The owner’s affinity for the traditional Kentucky liquor is tied to his family history. Zumwalde’s father went to school in southern Kentucky with Booker Noe, the grandson of Jim Beam and a master distiller who started selling premium Booker’s Bourbon in 1988.

“Over the years Booker would have shindigs and his friends would come down to a private party the day before,” Zumwalde said.

It was through his father that Zumwalde became a bourbon connoisseur, amassing his own private collection. The Purple Poulet’s bar is currently stocked with 35 brands of Zumwalde’s favorite bourbons, many of which have ties to the Booker Noe distilling lineage, and he plans to add more. Global wines and local craft beers such as Braxton, MadTree and other brands round out the drink menu.

Purple accents throughout the eatery are another personal touch -- and tie in to the eatery's name.

Zumwalde selected his restaurant location after Dayton offered its Community Commercial Advantage Program to help subside his rent for the first two years.

The Purple Poulet is open 5-10 p.m. Tuesday through Saturday. Reservations are accepted and the suggested attire is work casual.

“We want people to see they can have a nice experience but still be comfortable,” Zumwalde said.

For more information and a full menu visit the Purple Poulet on Facebook.