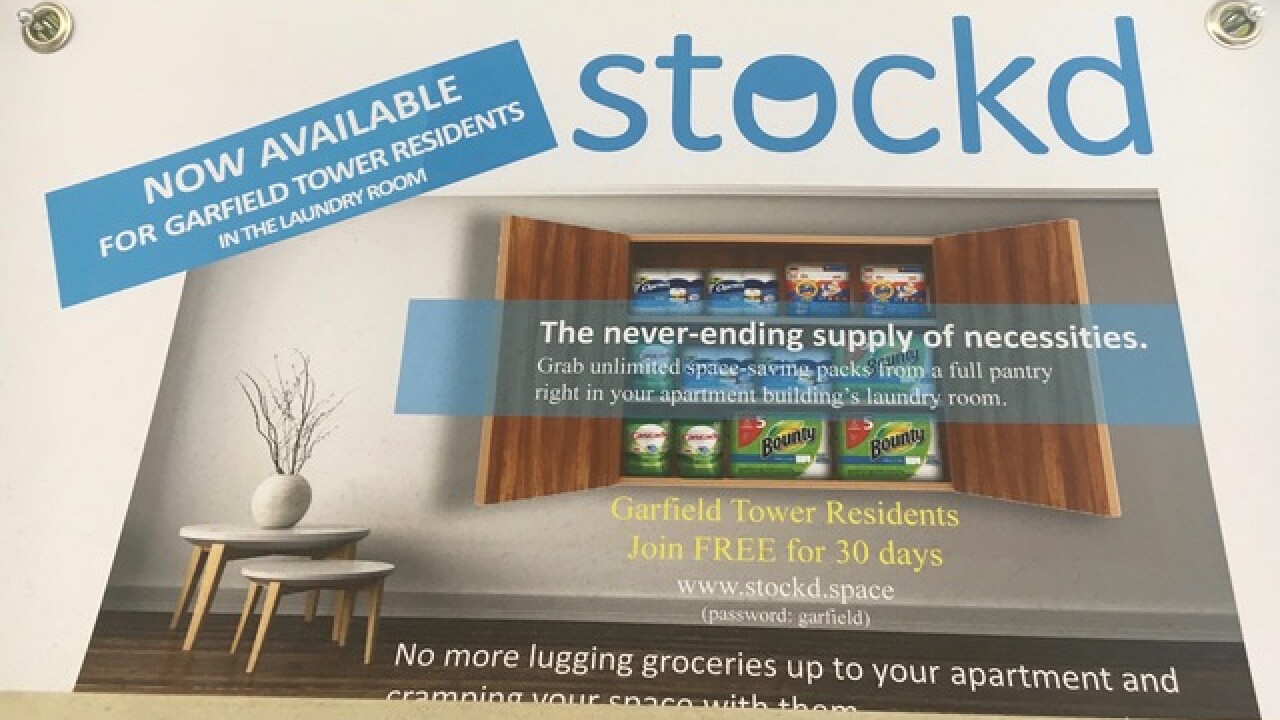 Copyright 2017 Scripps Media, Inc. All rights reserved. This material may not be published, broadcast, rewritten, or redistributed.
<p>P&G is testing Stockd, a new subscription-sales program for apartment buildings, in Cincinnati</p>

The service, known as Stockd , debuted about a month ago at Garfield Tower Downtown. Twenty tenants signed up for a free 30-day trial, including Vada Fernandez, who said she’ll likely become a subscriber at $19.99 per month.

“I’d like them to add dryer sheets and more selection on toilet paper, but other than that it’s great,” she said. “Very convenient.”

P&G spokeswoman Angie McAuliffe said the effort is “a small scale test” aimed at learning about “consumer replenishment interests and preferences.” There are no plans to expand the program, she added.

It is the newest example of how P&G is exploring new ways to sell its products directly to consumers, bypassing traditional retail stores in search of marketing techniques that boost customer loyalty and increase market share.

“On Amazon, Tide holds the top five search results for laundry detergent,” Moeller said. “Tide PODS are the number one bestseller with over 2,000 reviews and an average rating of 4.5 points. The online execution includes video, strong performance claims and strong value offerings for subscription options. On Walmart.com, Bounty is the number one search result for paper towels and is the bestseller behind strong brand content and superior performance communication.”

Moeller said P&G is learning how to stack the odds in its favor when it comes to online shoppers. In a grocery store, P&G brands are typically offered next to its rivals, which often include much cheaper store brands.

“If you watch shopping behavior in a physical store versus an online store, the average shopper exposes themselves to less assortment, not more assortment, online versus offline,” Moeller said. “Very few consumers go to the second or third page of the search. And what are the brands that show up in the first page of the search? They're typically the more popular brands with the most reviews and ratings.”

That’s a big advantage for P&G on a site like Amazon.com, where customers can shop for laundry detergent and never actually see a non-P&G brand.

With Stockd, P&G has created a tiny retail universe where its brands are the only options available. The four-by-four-foot cabinet at Garfield Tower has Bounty paper towels, Charmin toilet paper, Cascade dishwashing detergent and Tide Pods for laundry.

Subscribers use an app to unlock the cabinet, after which they and their roommates are invited to “grab as much as you need,” within the limits of “normal personal consumption.” The cabinet is “a connected device with a video monitor. We get notified immediately of theft or other out-of-stocks so that we can refill your pantry right away,” said the site’s frequently asked questions page.

Garfield Tower Leasing Consultant Messina Norris said she makes a point of showing off the Stockd cabinet on tours of the building. She predicts half of its 160 residents will eventually sign up for the service.

“Everyone who is projected to move in in the future said that they would definitely try it,” she said.

P&G has been selling its products directly to consumers since at least 2008. But it continues to test new ways of establishing direct relationships with consumers, including The Art of Shaving , a high-end retail chain that P&G bought in 2009 and Tide Spin , a laundry delivery service now being tested in Chicago.

"Anybody not talking about having a direct relationship with the consumer is missing the boat," marketing expert Dave Knox told WCPO in January. As chief marketing officer for the digital advertising agency Rockfish Interactive, Knox wrote a book, " Predicting the Turn ," about direct-to-consumer success stories.

Knox praised P&G's approach with Stockd, calling it "a great insight-driven approach to identify a need" with a business model that could prove viable.

"The margins that normally go to the retailer likely cover anything paid to the apartment, as well as physical labor of keeping it stocked," he said.