Homeowners in long-running dispute over wall 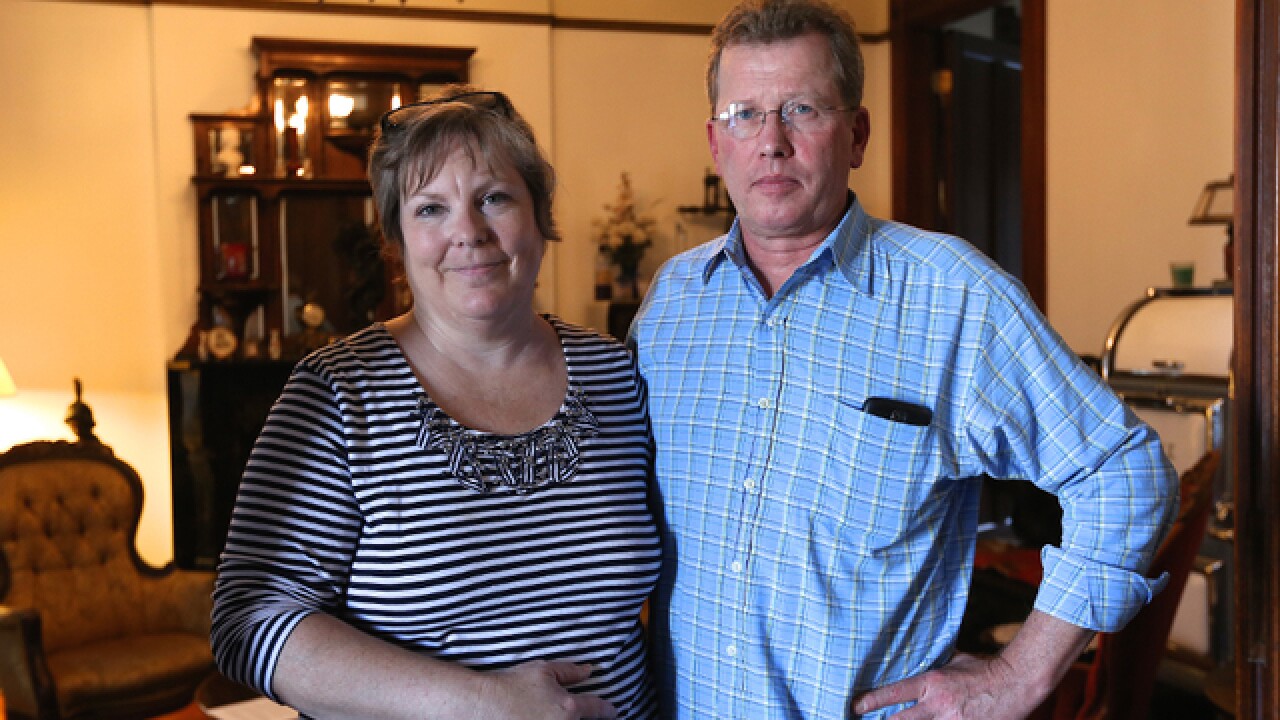 Emily Maxwell | WCPO
<p>Scott and Sheila Rosenthal are concerned that a 14-foot retaining wall that sits on the property of the neighbors who live behind them could collapse soon and is a danger to their home.</p>

CINCINNATI — Scott Rosenthal bought his towering, 12-room house in East Price Hill when the place was in such bad shape that his family figured he would just tear it down and build on the lot.

But Rosenthal had other plans.

"When I was 5 years old, my grandparents lived up on Considine Avenue," he said. "My grandma always liked this house. She thought it looked like a castle. I was very taken with it."

Rosenthal paid next to nothing for his castle on Mt. Hope Avenue when he got it in the 1980s. Fire had damaged the once stately Gerke Brewing Co. family home. And when Rosenthal had the water turned back on, the place looked like a car wash inside because of all the broken pipes.

He spent two years bringing the house back to life: fixing the mortar between the bricks, replacing the windows, evicting a raccoon from the second floor. The property had been vacant for years and was stripped of its original chandeliers and custom furniture.

Rosenthal made chandeliers to replace some that were lost and bought others. He even sewed the curtains that now hang in the dining room and parlor.

"He loves this house," Sheila Rosenthal said of her husband. "A lot of our money, a lot of our time, a lot of blood, sweat and tears have gone into this."

That makes the Rosenthals all the more frustrated about what they see as a threat to their home: A nearly 14-foot retaining wall that sits on the property of the neighbors who live behind them. It's a case that shows not every problem property is low-income. And sometimes the people affected by these problems are homeowners who have invested lots of money to maintain and improve their own properties.

Wall at Center of Legal Battle

The retaining wall at the center of the Rosenthal's story was built in the 1900s to create flat lots on Summit Avenue, the street behind Mt. Hope, Sheila Rosenthal said.

Rocks have fallen from a section of the wall that sits behind a detached garage that Scott Rosenthal built on the property in the late 1990s. The Rosenthals argue the wall has shifted so that it sits right up against the small garage's rear wall. During a driving rain, water squirts through that back wall and mud seeps into the garage through its floor, Scott Rosenthal said.

The couple has complained to the city's code enforcement division for years and finally filed a lawsuit against their neighbors, John and Margaret Scheper, in 2012.

Margaret Scheper said she and her husband paid to have dirt excavated from behind the portion of the wall that sits behind the Rosenthal's garage. She doesn't believe the wall has moved, saying that she could only fit her arm between the structure and the retaining wall right after Rosenthal finished building it. The Rosenthals dispute that, too.

To Scheper, it doesn't make sense to rebuild the wall because that's not what engineers do on hillsides like theirs anymore. The problem, she said, is that Scott Rosenthal built his detached garage in a bad location all those years ago. The Rosenthals argue he built the garage in exactly the same place a previous carriage house had been located.

"Is the wall eventually going to fall at some point in history or is the garage?" Scheper said. "Well, you're taking a bet, aren't you?"

A 2013 judgment in the case required the Schepers to take down and reconstruct the wall on or near Rosenthal's property.

The Schepers haven't done that, and the legal battle continues.

Margaret Scheper said it should be enough that they have removed dirt behind the portion of the wall near the detached garage.

She said she and her husband just want the problem to go away.

On that point, the Rosenthals agree. But they believe the Schepers should be required to do more — by the city, by the courts or by someone.

"It seems like code enforcement exists more to give someone a job writing tickets than about dealing with the real problems that turn into blight," Sheila Rosenthal said. "A neighborhood like East Price Hill that's making a comeback — or trying to –—we need something that works better."

City Solicitor Paula Boggs Muething wrote in a letter dated Nov. 24, 2015 - after the initial publication of this story -  that the city offered to hire an engineer to analyze the retaining wall to determine whether it still posed a threat after the work that the Schepers had done.

For the city to do that, the Rosenthals and Schepers had to agree that the report would be binding and that the city could not be made a party to any lawsuit on the issue.

But the Rosenthals wouldn't agree to that, Muething wrote.

"There is no obligation or requirement that the City abate nuisances on private property," she wrote. "At this time, the information the City has is that the wall does not pose a risk to public health, safety or welfare nor is it insecure, unsafe or structurally defective. Accordingly, the City will not proceed further on this matter."

In a letter to city officials dated Nov. 26, 2015, the Rosenthals said they could not agree to consider the outcome of the city's report binding because that, in effect, would be forfeiting their property rights.

The Rosenthals wrote that they "respectfully request the City take action to abate this nuisance."

Lucy May writes about the people, places and issues that define our region – to celebrate what makes the Tri-State great and also shine a spotlight on issues we need to address. To read more stories by Lucy, go to www.wcpo.com/may . To reach her, email lucy.may@wcpo.com . Follow her on Twitter @LucyMayCincy.