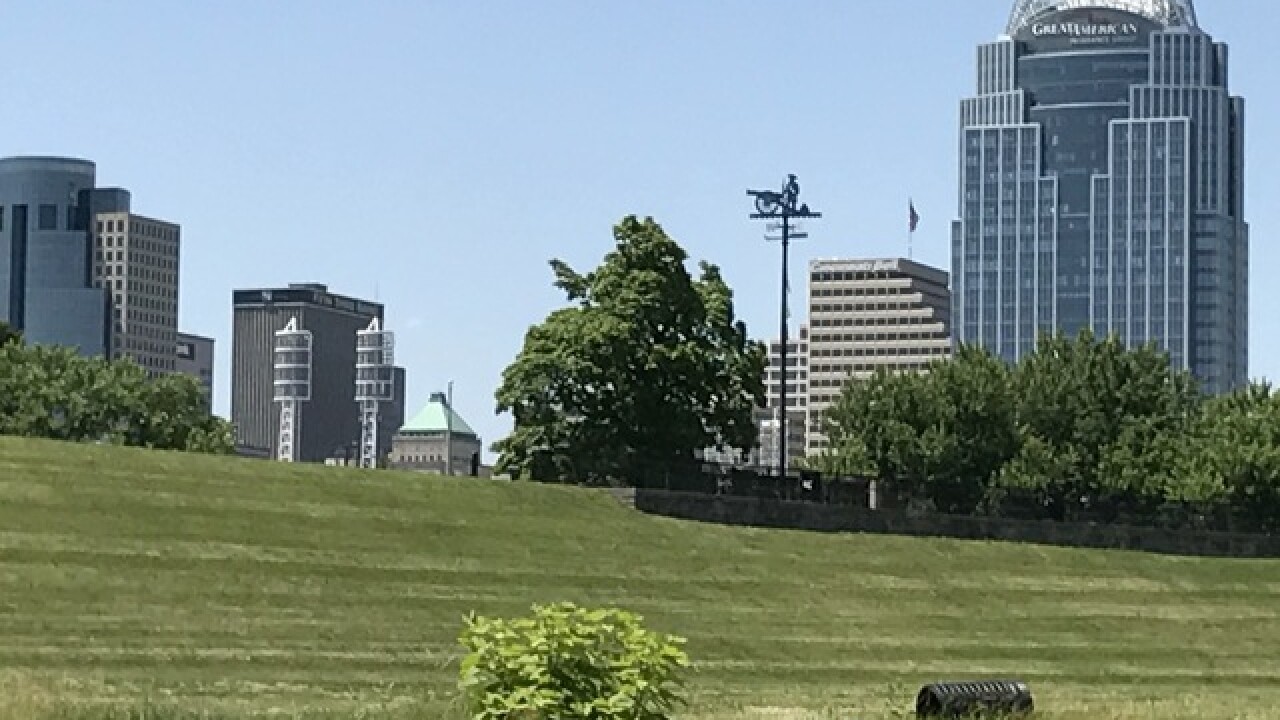 Copyright 2017 Scripps Media, Inc. All rights reserved. This material may not be published, broadcast, rewritten, or redistributed.
Vickie Ashwill | WCPO contributor
<p>If the FC Cincinnati soccer stadium is built on this site in Newport, this is the view of Cincinnati that the soccer fans would see.</p>

NEWPORT, Ky. -- Building the proposed FC Cincinnati stadium in Newport is a no-brainer for folks in Kentucky's river cities.

The site in question has been selected as one of three potential stadium locations for FC Cincinnati, which needs its own stadium to support its bid to join Major League Soccer. The Cincinnati club as well as Louisville City FC, which has a stadium site, both want one of four slots available in the MLS.

The Newport site has been the planned home for Ovation, a mixed-use $1 billion development that's been on hold for more than a decade. The site sits off Fourth Street between the courthouse and the bridge over the Licking River that heads into Covington. It has a stunning view of downtown Cincinnati as well as easy access to the Ohio city's amenities just across the Taylor-Southgate Bridge or the Purple People Bridge.

When Route 9/AA is completed, the site will also have direct multi-lane access to I-275, along with the existing access to I-471 and I-71.

While Newport seems to struggle in the conversation about the team's home location, businesses here are hyped at the potential. Who wouldn't want the additional increase in traffic for their business or hotel?

"I would love for them to be that close and to get opposing team fans here," said Aloft General Manager Kris Thomas. The new hotel had its first fully booked night on Wednesday, June 7.

Thomas, who has lived and breathed soccer in Seattle, and is a fan of Louisville City FC, said soccer is the fastest-growing sport in the country.

"If (FC Cincinnati and Louisville City FC) both get the national bid, that would be awesome. Two top teams in Kentucky."

Aloft is one of three new hotels in Newport and Covington; Hotel Covington and the Hampton Inn and Suites could also offer nearby housing.

The hotels, along with Newport on the Levee, all have event space as well, something Rovekamp said would be handy for officials and corporate visitors.

It's not just Newport and Covington that would benefit, said Eric Summe, president and CEO of the Northern Kentucky Convention and Visitors Bureau. Attractions in Northern Kentucky benefit the whole region, as Answers in Genesis' Ark Encounter has done since it opened last summer, he said.

The Ark is a daily operation, of course, but it has had an impact on hotels and eateries across the area, he said. A recent state tourism report showed it had an impact on other local attractions as well.

On peak days, 8,000 visitors visit the Ark, Mark Looy, founder and CCO of Answers in Genesis, which owns both the Ark and the Creation Museum, said a few weeks ago. FC Cincinnati has been hosting 15,000 to 20,000 fans on game nights at its borrowed home -- Nippert Stadium.

But why else build in Newport?

"Everything is so convenient," said Thomas, who moved here to lead Aloft. "I always brag that the benefits of living on the Kentucky side is that we get the better view."

Then there are the bars in nearby Covington that are dedicated to soccer -- longtime Molly Malone's and the newest, Orange Sports Bar and Grill, whose owners also own the Cincinnati Dutch Lions soccer club, which plays in the Premier Development League.

Owners Hans and John Philippo's family comes from Holland – and it's a serious soccer clan. Getting the FC Cincinnati stadium in Newport "would be great for Northern Kentucky," John Philippo said.

"It would help our business district," he said. "It would be fantastic (if they build here)." Of the three sites, Shanley said, "this is the best one. (But) I'm definitely a little biased on that one."

FC Cincinnati's final decision will also be influenced by financial offers to help the team get the stadium project off the ground.