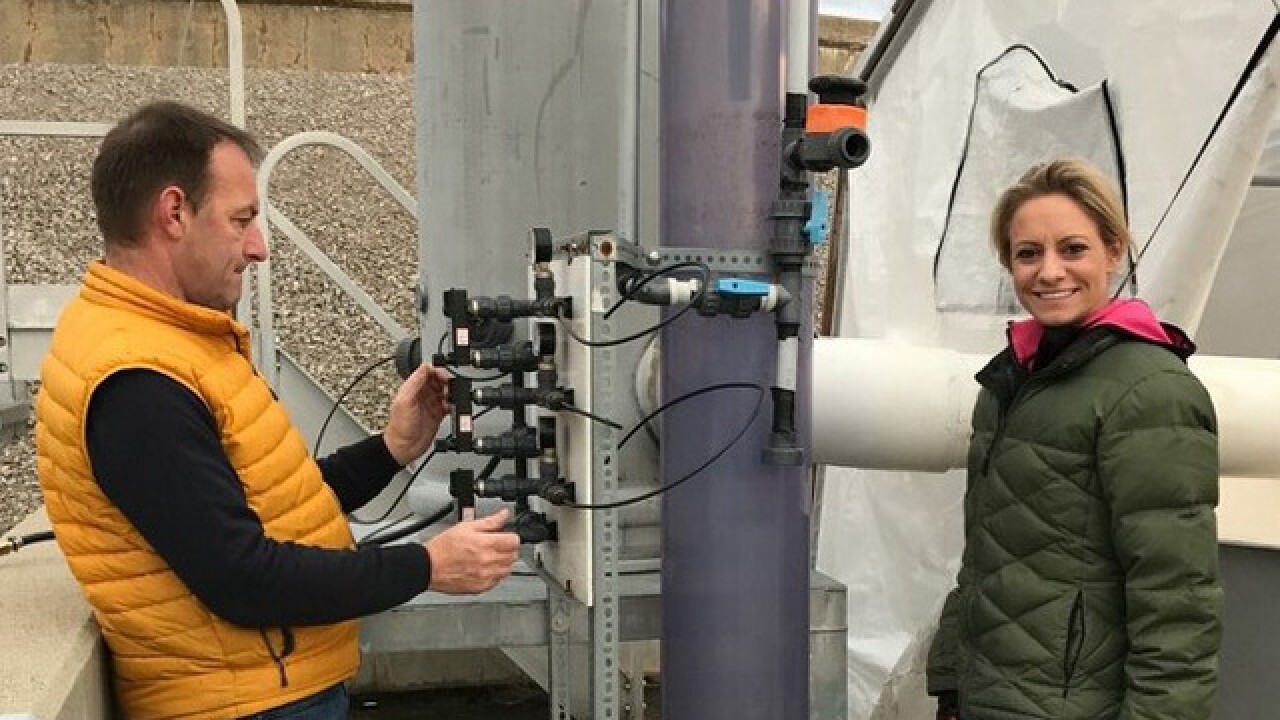 Copyright 2017 Scripps Media, Inc. All rights reserved. This material may not be published, broadcast, rewritten, or redistributed.
Provided
<p>Emmanuel Briquet of Searen and Katrina Eckard of WEL Enterprise are partnering in water research and development to incorporate Searen technology into WEL's system platform. WEL Enterprise was part of the inaugural class of Pipeline H2O, a Hamilton-based accelerator designed to commercialize new technology dealing with water.</p>

HAMILTON, Ohio -- The startups in the inaugural class of Pipeline H2O, a Hamilton-based accelerator designed to commercialize new technology dealing with water, will show off their wares and services at the accelerator's first demo day at 6 p.m. Thursday at Union Hall in Cincinnati.

After the pitches, the best startups, as determined by the startups as a whole, will each receive $25,000.

Pipeline is run by the staff of The Hamilton Mill, a business incubator in Hamilton that focuses on advanced-manufacturing and clean-technology businesses.

WCPO.com recently talked with Antony Seppi, the "director of flow" for Pipeline and operations director for The Hamilton Mill, about how the first class has gone and what he's learned.

The Pittsburgh native worked with various tech companies before he obtained a master's degree in urban planning at the University of Cincinnati, worked for the City of Hamilton's economic development department and then joined The Hamilton Mill.

What follows is an edited and sometimes paraphrased version of that interview.

What unexpected events did you deal with?

Originally, the demo day was to be held at the Water and Energy Exchange (WEX) Global America Summit 2017, which was to be held in Cincinnati. But in December, because of the political climate after the presidential election, the London-based WEX decided not to come to the United States at all.

(According to Ryan Welsh, principal engineer for the Greater Cincinnati Metropolitan Sewer District and one of the local organizers of the summit, WEX was concerned because the new administration had taken a negative stance towards the U.S. Environmental Protection Agency and environmental regulations in general.)

Because of that, the six startups in the class missed the chance to make their pitches before an international audience -- with the potential to secure international customers and investors. It would also have put Cincinnati, and Pipeline, on the map, in terms of water initiatives, among members of the international water community.

What was the most challenging part of creating this accelerator?

Winnowing the number of startups to six. We had a very good response to the launch. We had close to 70 applicants from around the world. We don't require the startups to move here, only to come to town once a month over four months.

We created a Pipeline review board of seven members, drawn from the local water community, including the city of Hamilton's water system, MSD and the Cincinnati Water Works. The board made several passes at the applications, whittling them down to 12.

Then the core Pipeline team did Skype interviews with the final dozen, honing in especially on the makeup of each team.

The staff looked for startups that had working prototypes or working products, something more than just an idea. We found startups working on core challenges having to do with water, including scarcity, recycling, treatment and infrastructure.

What are some of the most interesting startups in this class?

kW River Hydroelectric is a Hamilton-based startup with a patented, micro-turbine device designed to create energy from water that flows over low-level dams. It was previously a part of The Hamilton Mill. The company plans to test its product, probably within the next 12 months, on the Great Miami River in Hamilton.

To be able to see this come to fruition on a river literally 100 yards from where our building is, is pretty exciting.

ANDalyze, based in Champaign, Illinois, has created DNA-enyzme sensors that can test water for mineral content in real time, and remotely. That means no running samples to a lab and waiting days for the results. ANDalyze will probably be testing its product with the city's water utility this fall.