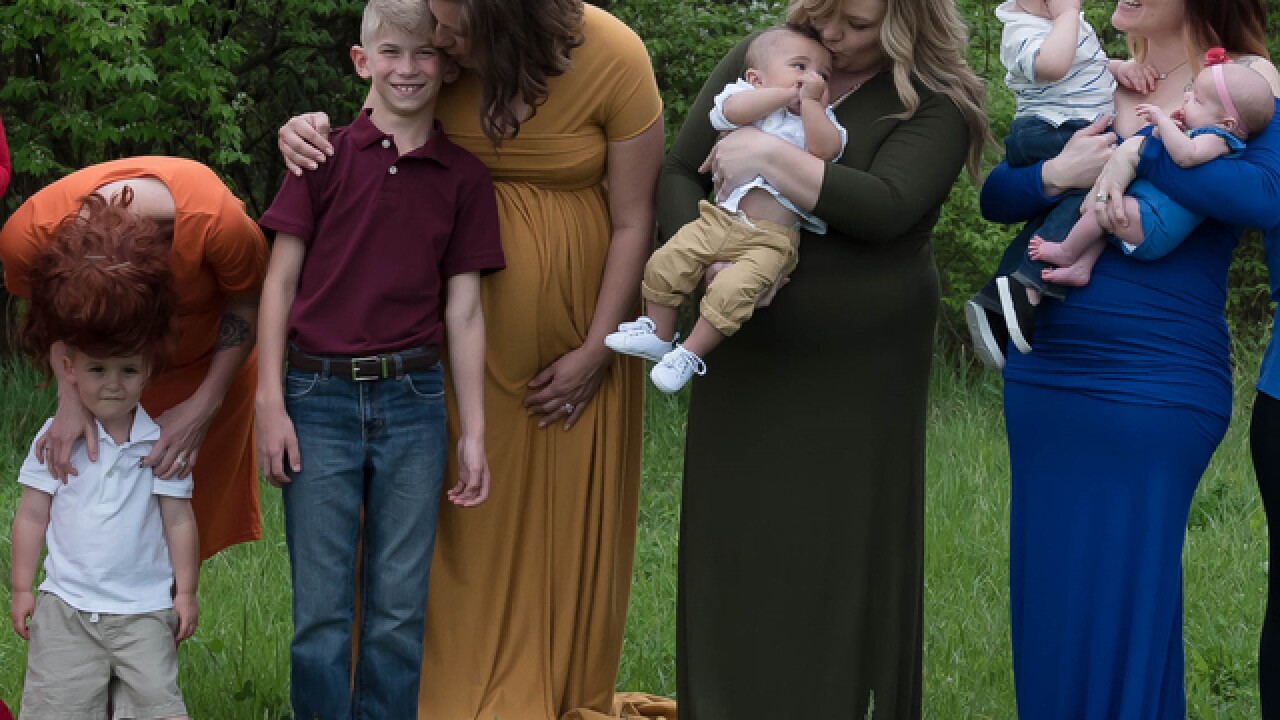 Copyright 2017 Scripps Media, Inc. All rights reserved. This material may not be published, broadcast, rewritten, or redistributed.
Provided
<p>These are some of the moms and children featured in Maria Kirkland's photography project, which she created to raise awareness about infertility. (Photo provided by Maria Kirkland)</p>

CINCINNATI -- Kristen Knapp had her first intrauterine insemination (IUI) in 2009. She cried during the entire procedure.

After all, infertility was something the local mom had never considered. At the time, she and her husband, Jim, had a toddler son, who had been conceived naturally during the first month they tried.

The couple's pregnancy with baby No. 2 would not come so easily.

"I remember crying through the entire procedure, just feeling overwhelmed at what we were undertaking," Knapp said of that first fertility treatment. "Looking back now, that was the easy part. We continued month after month of the same process: pills, IUI, disappointment."

The Knapps' story is not uncommon. In fact, about one in eight couples struggles with infertility, according to data released by RESOLVE: The National Infertility Association.

To help raise awareness, the Knapp family agreed to be one of six families from Greater Cincinnati who will be featured in a local photography project.

Maria Kirkland, of Liberty Township, is the photographer behind the project. She gathered the six families, who are all in various stages of infertility, on Thursday to document their journey through photographs.

"The idea is to get people talking about infertility," Kirkland said of the project. "So many people are struggling to build a family, and some are silent. It can be very isolating."

Kirkland is a mom of two, a part-time pediatric nurse at Cincinnati Children's Hospital Medical Center and a photographer who specializes in stylized maternity and newborn photography.

In all three of those roles, she meets people affected by infertility.

"It's all around me," she said. "I'm moved by all the stories I hear and the bravery of these families."

Knapp said she and her husband wanted to share their personal story because they know so many people are going through the same struggles they have endured.

Like most people who seek medical help for infertility, their journey didn't stop with the first treatment. From 2009 to 2016, Knapp had 20 IUI procedures and two surgeries. The couple also lost a baby through miscarriage.

She admits that infertility put a strain on their marriage and their relationships with friends and family.

The Knapps' infertility journey will come to a happy end very soon, however. They conceived their second child last fall with the help of in vitro fertilization (IVF).

Unlike IUI, or artificial insemination, IVF is a process of fertilization that requires extracting eggs, retrieving a sperm sample and combining them in a laboratory. The resulting embryos are then transferred to the uterus.

As part of the photography project, Knapp shared her family's full story with Kirkland. Her words will accompany the photos and be posted on Facebook and Instagram.

"I may never understand why good people have to suffer so much to have a family while others can so easily have children they don't want. There are still parts of me that get angry over that," she wrote. "At this point, though, we just count down the days until we can hold our miracle and put an end to our infertility journey."

It has been the most difficult part of her life, Knapp said, but she said she's happy to share the ups and downs of their journey.

"My desire is that at least one person finds comfort and hope in our story," she said. "This topic is not discussed enough, and women suffer in silence and without hope too often."