Her paper art is both useable and ethereal 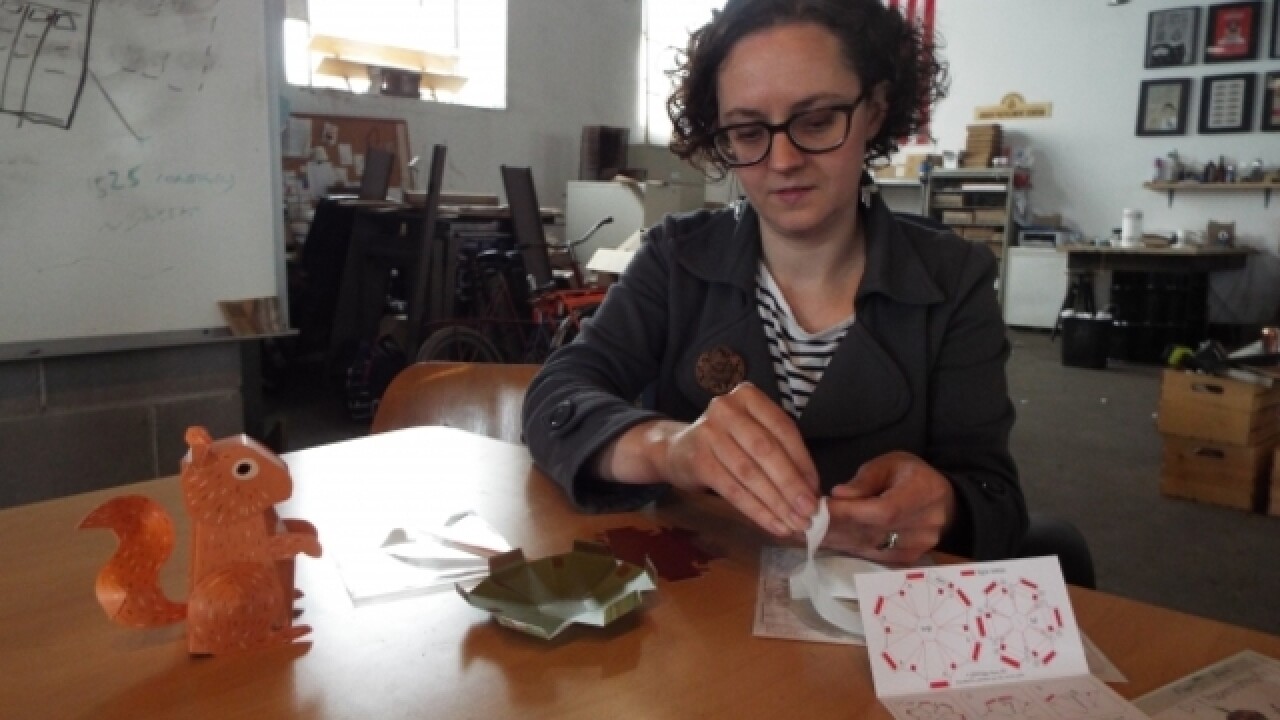 Kevin Eigelbach/WCPO contributor
<p>Jessica Wolf, sole proprietor of Paper Acorn, demonstrates how to put together one of her animals made from folded cardboard.</p>

Some new businesses take off right away, and others wait years before their big break.

Among the latter is Paper Acorn, which sole proprietor and sole employee Jessica Wolf created nearly seven years ago.

The Carthage resident makes kits out of light cardboard that can be folded into animal-shaped boxes that can hold candy or the like. Her first creation was an acorn — hence the business name — but she has also created squirrels, birds and even a hedgehog.

The more lucrative and unique side of the business is creating paper chandeliers for businesses and residences. Downtown resident Chad Nielson commissioned one for his loft after seeing one of Wolf’s large, two-story creations hanging from the ceiling of High Five Salon in O’Bryonville, where he gets his hair cut.

The sculpture mimics the lines of a classic chandelier, Nielson said, but is made from pieces of paper that gradually flow from dark to light colors.

“It makes for an amazing, stunning, beautiful piece of art in our house,” he said.

How did the business get started?

Wolf studied fine arts at Murray State University, then took a job with a package design company in Cincinnati. Bored with designing repetitive projects such as toothpaste cartons, for fun, she used what she’d learned about making two-dimensional prints into three-dimensional objects to make animal-shaped boxes.

She began selling them at the online marketplace etsy.com, and when she began getting traction there, in 2009 she quit her job and created Paper Acorn. Until last year, she made each figurine herself and sold them on Etsy, at her website, at craft shows and in a few local stores.

Last year, she went through First Batch, an incubator for manufacturing businesses in Over-the-Rhine, where she focused on making do-it-yourself kits for each box, complete with simple instructions for assembly. She also hooked up with an art designer and manufacturer who could mass-produce them.

Is she making money?

Last year, because she was focused on First Batch, she didn’t take on as much work as in previous years and had about $25,000 in revenue. In 2014, revenue was about $35,000. One competitive advantage is that her expenses are minimal. She pays just $200 a month to rent her workspace in First Batch’s building at 111 W. McMicken. Her boxes retail for $7, but they’re very cheap to produce, with a profit margin of 75-80 percent, she said.

Who are her customers?

For the sculptures, any business or homeowner that wants a unique objet d’art. For the boxes, they are typically 50- to 65-year-old women whose daughters or grandchildren are getting married and want some unique centerpieces for the reception. Or parents who are having a special event and want an activity for the children.

The potential market is pretty huge, Wolf said, with arts-and-crafts a $30 billion industry in the United States.

She’d love to get her boxes sold in big-box craft stores such as Hobby Lobby, she said, but she isn’t sure how to make that happen. Her immediate goal is to create more designs so she can have a more well-rounded collection of offerings.

“In my dream scenario, I would have a team of people to take care of the business end of things, and I would just design them,” she said.

No matter what happens, she said, it beats working for the design company. It’s not as lucrative, but it’s more satisfying. And self-employment gives her time at home with her freelance-illustrator husband and their 3-year-old son.

“I just enjoy creating and giving other people the opportunity to be creative, even if it’s just for a little 15-minute craft,” she said.