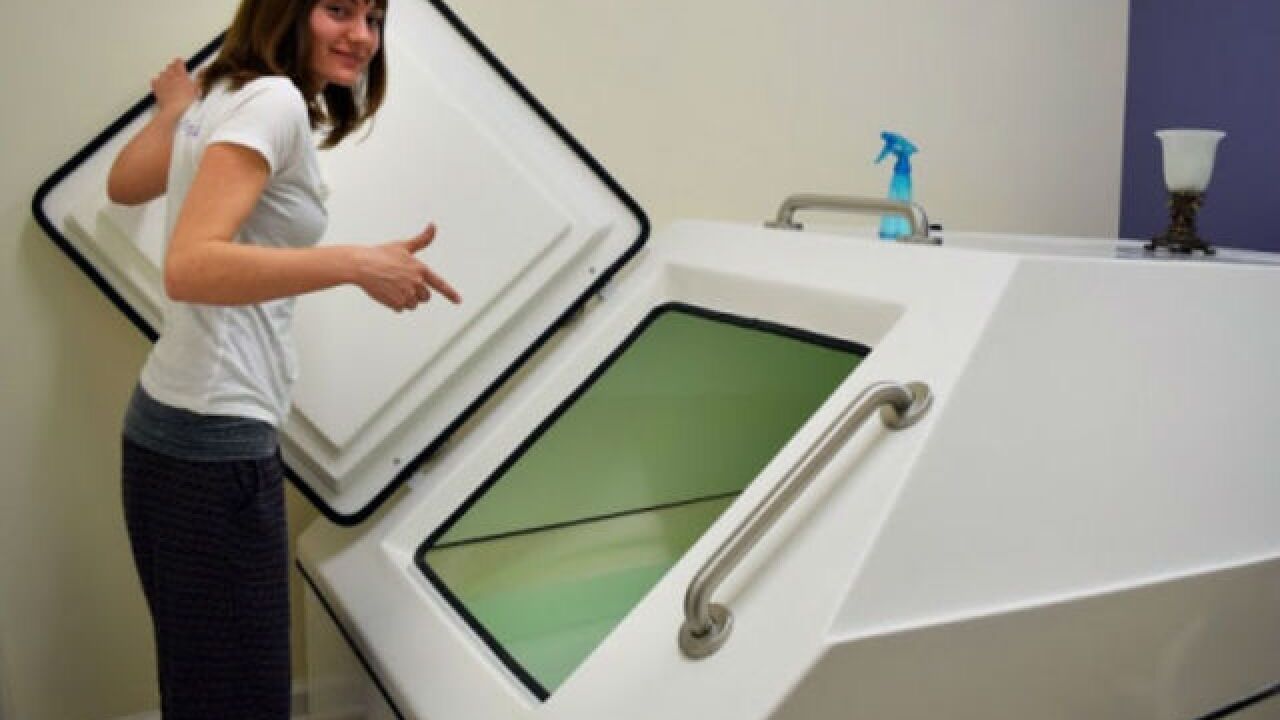 <p>The womblike environment of a float tank is completely dark and quiet, and 1,000 pounds of Epsom salts keeps users’ bodies effortlessly afloat. Laura Collins is an attendant at FloatSource in Loveland, one of three local float therapy locations. Eric Camper/Provided</p>

LOVELAND, Ohio -- In a world where everyone is plugged in all the time, what would you give for an hour of absolute peace and quiet?

In fact, it would be an hour of total sensory deprivation.

Welcome to the world of float therapy – not necessarily a new concept, but one that’s becoming more popular as a way to relax and reboot. With float tank studios popping up in West Chester, Loveland and Newport, it’s also becoming more accessible for Tri-State residents.

So, what exactly is float therapy? Imagine a large tank with a lid – an enclosed pod, if you will – that contains 10 inches of water with 1,000 pounds of Epsom salts dissolved in it. After a quick shower to rinse off, you grab a pair of earplugs and climb into the tank (sans bathing suit is recommended), closing the lid behind you.

It’s completely dark, and the earplugs help block out any ambient noise. The water is warmed to nearly the same temperature as your skin, and thanks to the dense saltwater, you’re weightless in the womb-like environment.

“It took me about 15 minutes to get used to it,” said Eric Camper about his first float. “Once I did, I had a feeling of bliss through my body. I thought of all of my individual cells being relieved to not have to deal with gravity for awhile.”

Camper said he first became intrigued with float therapy after watching the 1980 film "Altered States," which featured sensory deprivation tanks. After first experiencing a float tank in San Francisco three years ago, he opened FloatSource in February 2014 off Branch Hill-Guinea Pike in Loveland.

“I primarily do it for meditation,” he said. “But I’ve had people come here that have never heard of it, and they just completely relax.”

Ben Filloon of Lebanon has been floating once a week for the past nine months and claims the therapy helps him focus and improves the way he thinks. He said although he was nervous at first, he wanted to try something new.

“It’s just having time to yourself and feeling nothing around you,” he said. “It’s peaceful.”

Other reported benefits of float therapy include pain relief and reduced symptoms of depression, anxiety and post-traumatic stress disorder. Float sessions typically last one to two hours and cost between $50 and $100.

For first-time floaters, a bit of apprehension is normal, but there are ways to alleviate any concerns. You can keep the lid of the tank cracked open to adjust the light flow, and some of the newer tank designs have LED lights built within the interior as well as a call button that alerts the front desk if necessary.

To combat claustrophobia, TAO Float Loft, located off Tylersville Road in West Chester, offers the experience in a private float room with eight feet of ceiling space and a transparent door.

“People are afraid they might drown or get stuck,” said Hunter Frederick, TAO spokesman. “I’ve tried to put myself under water and you can’t. It’s a struggle to even get your hands to the bottom of the tank.”

The magnesium sulfate kills any bacteria that might be in the water, and after each session, the contents of the tank are run through a commercial-grade filter to remove any particulates and help sterilize the pod.

“It’s such a great experience, there’s nothing like it,” Frederick said. “After you’re done, colors seem to be brighter, people seem to be nicer; everyone should experience it.”