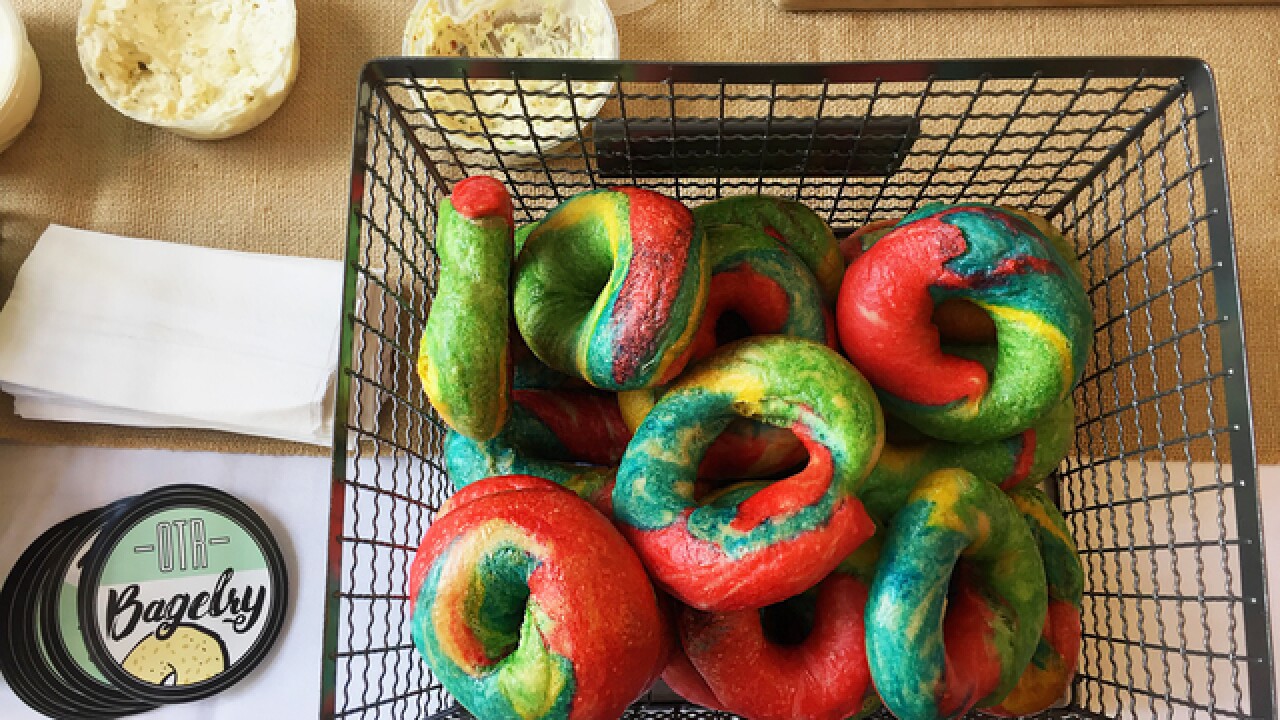 CINCINNATI -- When Richard Huff and his wife, Erin, lived in Louisville, they frequented Nancy's Bagels.

"It was our routine," Huff said. "We'd get bagels from there every weekend. It was a big part of our relationship."

In 2013, the Huffs moved back to their hometown of Cincinnati and settled in Over-the-Rhine. Huff started baking bagels at home, and his family loved them so much they prodded him to sell them to the public.

That push, coupled with a dearth of fresh bagel shops in Cincinnati, led Huff to found OTR Bagelry in March, working out of Findlay Kitchen.

"Baking has been a way to express my affection," Huff said. "I enjoy cooking for my wife and my family. When I'm making bagels, it's like I'm showing my affection for the neighborhood."

Huff's brother, Kyle Jones, also came along for the ride. Jones had been living in Fort Collins, Colorado, designing jewelry and working at Gib's Bagels, when he decided to move back to Cincinnati and join his brother at the Bagelry.

"There was some guilt taking my heart away from here, when I wanted to contribute to (Cincinnati's growth)," Jones said. "Being able to bring my heart back and being able to do this bagel business with my brother was perfect synergy. This was definitely the right move."

At the Colorado shop, Jones rolled 1,200 bagels a day, but not by hand.

Jones and Huff debuted their artisanal bagels at the June edition of Second Sunday on Main, which Huff called "an unmitigated success;" the bagels sold out in a couple of hours. Huff said the response was overwhelming -- especially one woman's reaction in particular.

"She, like a lot of people, said, 'There's no good bagels down here,'" Huff said. "She took a bite. I wouldn't say she got emotional, but she seemed caught up. She went and bought me a beer to thank me for bringing good bagels around."

One issue they've run into with their bagel making is the high humidity, which can wreak havoc on the proofing part of the two-day process.

"We coasted out of winter and that spring period, and the heat and humidity hit at once," Huff said. "It was a curveball when it came to the bread rising. With these, they sit for 36 hours. When it over-rises, it's a disaster. It's hard to predict. You gotta learn fast how to prevent over-rising from happening."

When Huff isn't making his bagels at Findlay Kitchen (as does Five One Three Bagel Co., though they have yet to cross paths), he works as a public defender.

"It's bagel making at night and defending justice during the day," Huff said.

Eventually, he would like to open a brick-and-mortar location on Main Street in Over-the-Rhine, but he's not sure how he'll manage both jobs -- especially since the bagel part has taken off so quickly.

"I didn't realize there was this much pent-up desire for bagels in OTR," he said, adding that OTR Bagelry is filling a niche in Over-the-Rhine -- and beyond.

Huff has a recurring Wednesday bagel night at Brink Brewing in College Hill. Check for that and other upcoming events at OTR Bagelry's Facebook page.