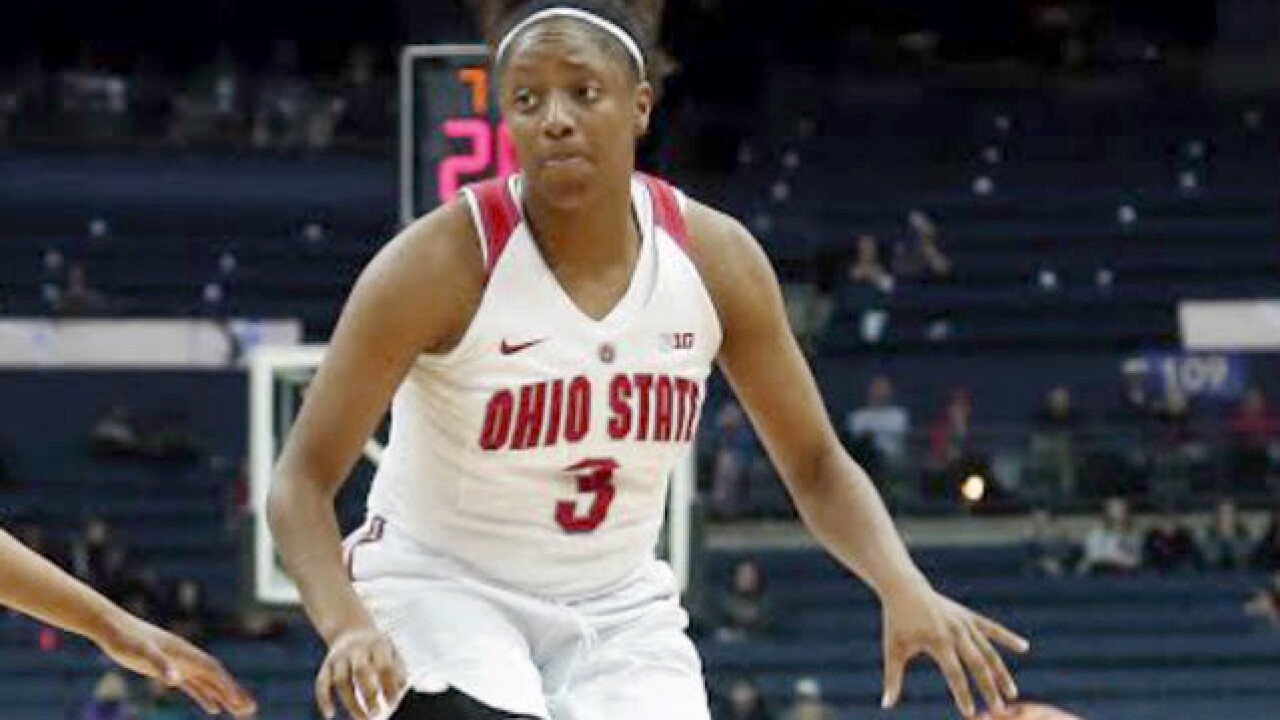 COLUMBUS, Ohio – Kelsey Mitchell took a deep breath and reflected upon the opportunity that is upon her Thursday night in New York City.

Mitchell – the only four-time All-American in Ohio State University women’s basketball history – was honest with her thought process this week.

The former Ohio State standout guard is projected to be selected in the top four picks of Thursday night’s WNBA Draft. Still, the 2014 Princeton High School graduate doesn’t know what to expect. It can be a bit nerve-racking not knowing her destination.

However, Mitchell and her family are soaking in a memorable week after arriving in Midtown Manhattan Tuesday.

“I am grateful for the process,” Mitchell told WCPO Monday afternoon. “It’s one of those things where I am just trying to be a part of the moment.”

The 2014 Ohio Ms. Basketball winner arrived in New York Tuesday. Mitchell was scheduled to attend meetings with WNBA personnel including rules of the league, how to speak with the media and other information leading up to the draft at the Nike New York Headquarters.

The first round will be televised on ESPN2 starting at 7 p.m., Thursday followed by rounds two and three on ESPNU at 8 p.m. The draft will also stream live on the ESPN app.

Mitchell is projected to be selected No. 2 by the Indiana Fever by the Associated Press, FanSided, SB Nation and Bleacher Report. DraftSite projects Mitchell to be selected by Chicago at No. 3.

"It's really exciting," Ohio State coach Kevin McGuff told WCPO Tuesday. "I'm super happy for her. She has worked incredibly hard to put herself in this position. She has had an amazing impact on our program. It's just awesome to just see her being able to now transition into being a professional. I think she is just going to be unbelievable in the WNBA."

The Las Vegas Aces (formerly the San Antonio Stars) hold the No. 1 overall pick. Indiana selects second, followed by two selections for the Chicago Sky – the No. 3 pick, acquired in a trade with the Atlanta Dream last season, and its own pick at No. 4.

Mitchell has been working with her agent, Allison Galer, this month in preparation of the draft. Mitchell said any endorsement details off the court will be determined later.

After the draft, Mitchell said she will attend the USA Basketball Women’s National Team Training Camp in Seattle April 23-27. The WNBA training camp opens April 29 when the preseason starting May 4.

Mitchell will represent her family and Ohio State Thursday night. She'll also represent the Princeton High School community. It's a moment many in the community have anticipated.

"Watching her break so many records during her career and move into second place all-time in scoring has just been amazing," Princeton girls' basketball coach Jill Phillips said. "I am so happy for her and proud of her. This week is exciting for everyone who knows her."

On April 5, Mitchell added another award to her collegiate resume as she was selected as the 2018 Dawn Staley Award winner, given to the nation’s top collegiate guard.

Mitchell was presented the award during the Phoenix Club of Philadelphia’s Dawn Staley Award reception at the prestigious Union League of Philadelphia.

In addition to her scoring, in which she was third in the country at 24.3 points per game, Mitchell dished-out a career-high 148 assists and had a career-low 78 turnovers this season for Ohio State (28-7).

“The biggest thing I always say about Kelsey is these things haven’t happened by accident,” McGuff told WCPO in February. “She is the hardest worker I’ve ever been around. She is absolutely relentless about improving her game.”

Mitchell also shot 44.8 percent from the floor and 40.2 percent from three-point range which were both the best of her career. She was named the Big Ten’s Player of the Year for third time and became Ohio State’s first four-time All-American.

Mitchell finished her career as the NCAA’s second all-time leading scorer with 3,402 career points. She also made 497 career three-pointers which is 56 more than any other female in NCAA history.

Mitchell owns 30 OSU, Big Ten or NCAA records and is just one of four players in NCAA history with more than 3,000 points and 500 assists.

Those that know Mitchell say the stats and records are for others to analyze. She is all about the team. Thursday is about her moment in the national spotlight.

There will plenty of friends, family and supporters from the Princeton High School community watching Thursday night. Her high school career was in the national spotlight especially during her junior and senior seasons. She helped lead Princeton to the Division I state title in 2014.

Princeton Athletic Director Gary Croley Jr. said Mitchell is always a first-class individual who expresses humility in everything she does.

Princeton recognized Mitchell this past winter with her high school basketball accolades on two banners in the school's gymnasium. In the future, Princeton will be sure to recognize her Ohio State and WNBA accomplishments, Croley said.

“Kelsey finds some way somehow to include everyone around her in her success,” Croley said. “She shies away from the cameras. She shies away from the ‘me, me, me’ personal attention. It’s always, ‘Look at we did. Look at what my family has been able to do with (supporting) me. But, this is one time where I hope she is able to stand in the limelight and enjoy it.”