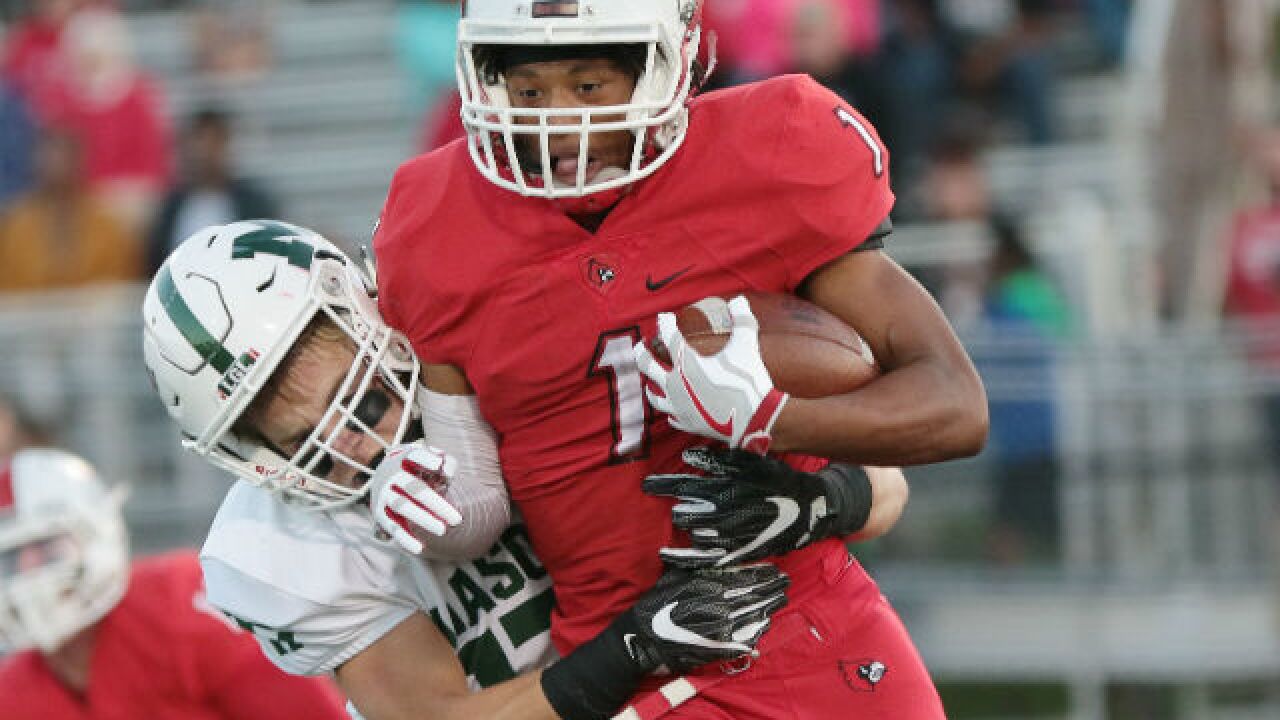 Copyright 2017 Scripps Media, Inc. All rights reserved. This material may not be published, broadcast, rewritten, or redistributed.
TONY TRIBBLE
<p>Colerain's Syncere Jones had four carries for 106 yards in a 48-6 win over Hamilton last week. The Cardinals, projected to be the No. 1 seed in Division I, Region 4, play at Mason Friday night. (WCPO file)</p>

Shuck, the Greater Miami Conference Commissioner, has formally made playoff projections since 1996. Shuck's information is independent and unofficial. It has no official connection to the Ohio High School Athletic Association computer points.

In Division I, Region 4, Colerain (6-0) is unsurprisingly projected as the No. 1 seed. Colerain plays at Mason (5-1) Friday night.

The Cardinals, which have not lost in conference play since October 2008, face three other potential Greater Miami Conference qualifiers. Even one loss would not likely knock them off the top spot.

Elder (4-2) is projected at No. 2 although the Panthers' remaining opponents have a combined 19-5 record.

Of the four teams with 5-1 records, Moeller has the toughest schedule in Region 4 including games versus Elder Friday night at Nippert Stadium, at Cleveland St. Ignatius Oct. 13, followed by home games with Lakewood St. Edward and Winton Woods to close the regular season.

Moeller has an opportunity to win the Greater Catholic League South division title outright Friday night for the first time since 2013. With a win, Moeller coach Doug Rosfeld would become the first head coach since Steve Specht (St. Xavier) in 2004 to win the GCL South title outright in his first season.

The question remains whether St. Xavier (2-4) could qualify at the No. 8 spot with a 5-5 record. The Bombers were the first Ohio team to win a state title with five losses when it captured the Division I state championship in 2016. The Bombers play at La Salle (4-2) Friday night.

In Division II, Region 8, Little Miami (6-0) is the only undefeated team in the region. The Panthers are trying to qualify for the playoffs for the first time since 1992. Little Miami could threaten Kings (5-1) for the No. 1 seed.

Winton Woods (5-1) is projected to be on the road for the first week of the playoffs at the No. 5 spot but that could change. The Warriors play host to Edgewood (5-1) Friday night. Winton Woods is at Elder (4-2) Oct. 12, then plays host to St. Francis de Sales (4-2) Oct. 19 before going to Lockland to play Moeller (5-1) in the regular-season finale.

"No one plays a more difficult schedule than Winton Woods," Shuck said. "I'm giving them two out of four but it could go either way."

In Division III, Region 12, Badin (4-2) must still play Alter and Chaminade Julienne. Mount Healthy (3-3) is picking up steam at the No. 10 spot for the moment.

In Division V, Region 20, Middletown Madison (6-0) continues to build momentum from the school's first playoff appearance and state semifinal appearance in 2017. The Mohawks should have a high seed.

WCPO will continue to update Shuck's projections through the final weekend of the regular season Oct. 26-27.