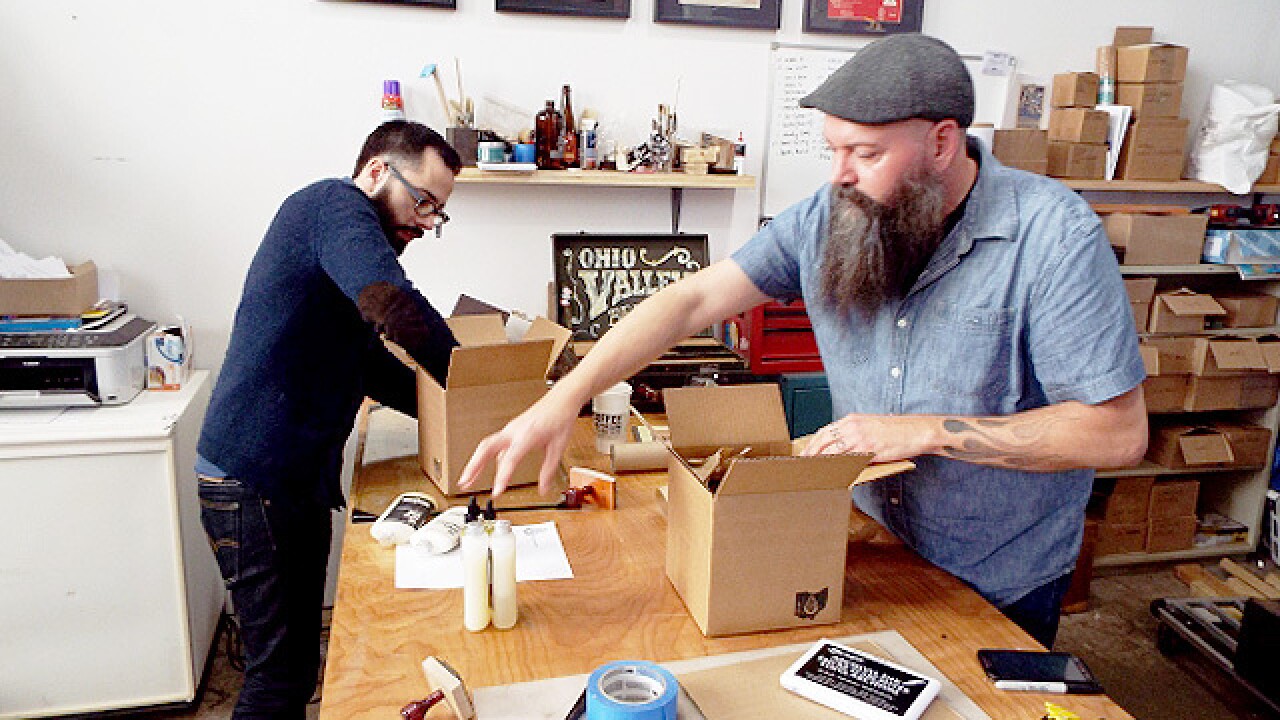 CINCINNATI -- Beards. They make your face itch, and when you’re cheek-to-cheek, they scratch the face of your significant other.

That’s the problem Scott Ponder, 44, and Patrick Brown, 34, both of Northside, aim to solve with Ohio Valley Beard Supply LLC, the Over-the-Rhine startup they created in November 2013.

Or, as Ponder puts it, they change beards “from porcupines to kittens.”

According to the company’s website, the Melville elixir, named after “Moby-Dick” author Herman Melville, “will ensure that you don’t have to sail to the ends of the earth, or sacrifice your favorite leg, to attain peace with your manly mane.”

How has this business grown?

Ponder has cut Brown’s hair for about 11 years at his Northside Chop Shop. About two years ago, both men were growing out their beards and experiencing the problems common to hirsute faces. After much trial and error, Ponder devised a solution using various oils.

“It was born out of necessity,” Ponder said.

“It was a product Scott essentially made for the two of us,” Brown said.

They talked about going into business together, and Ponder dropped by Accupack Midwest Inc., a nearby packaging company, just to see if the product could be packaged. After getting an enthusiastic response, he texted Brown to say “it’s on.”

A few minutes later, Brown, program director for the University of Cincinnati’s Center for Intelligent Maintenance Systems, texted back a design for a logo.

They started the business with $3,000 from some friends of Ponder, promising them a year’s worth of free haircuts. They began by selling at local flea markets such as Second Sunday on Main, which they found was a great way to get product feedback. They still do the flea markets, but now the product is sold in nearly 70 stores.

In November, they signed with their largest retailer, Fresh Thyme Farmers Market, which has three Tri-State locations.

Are They Making Money?

Last year, about one-third of sales were at flea markets, about one-half retail and the rest wholesale, Brown said. He expects retail sales to take off this year.

They’ve decided against trying to boost sales from the website because it’s much easier to make one shipment of 50 units to a store than to ship 50 single units to 50 customers.

“The Internet is how we get into new places,” Brown said.

The company was accepted into the 2014 class at First Batch, an Over-the-Rhine business accelerator dedicated to local manufacturing. It was the accelerator’s second class. (The application deadline for the 2016 class has passed.) The company still uses space there.

The duo hopes to have a new product, shaving soap for the hair on the neck below the beard (the underbeard), available for their first flea market this summer. They’d also like to get their product into a few more stores, especially groceries such as Kroger.

What Have They Learned?

The first year, all the profits went back into the business. By the end of the second year, the men were working so hard they felt like the business was running them.

“I was not having fun with it anymore,” Brown said. “I was just sweaty and mad.”

They decided to start taking the profits and using them to pay their household bills and living expenses. Brown didn’t need the money, he said, as much as he "needed to know that I was driving the car and it was not driving me.”

That has made it all worthwhile and fun again, he said. “I miss all the customers now,” he added.