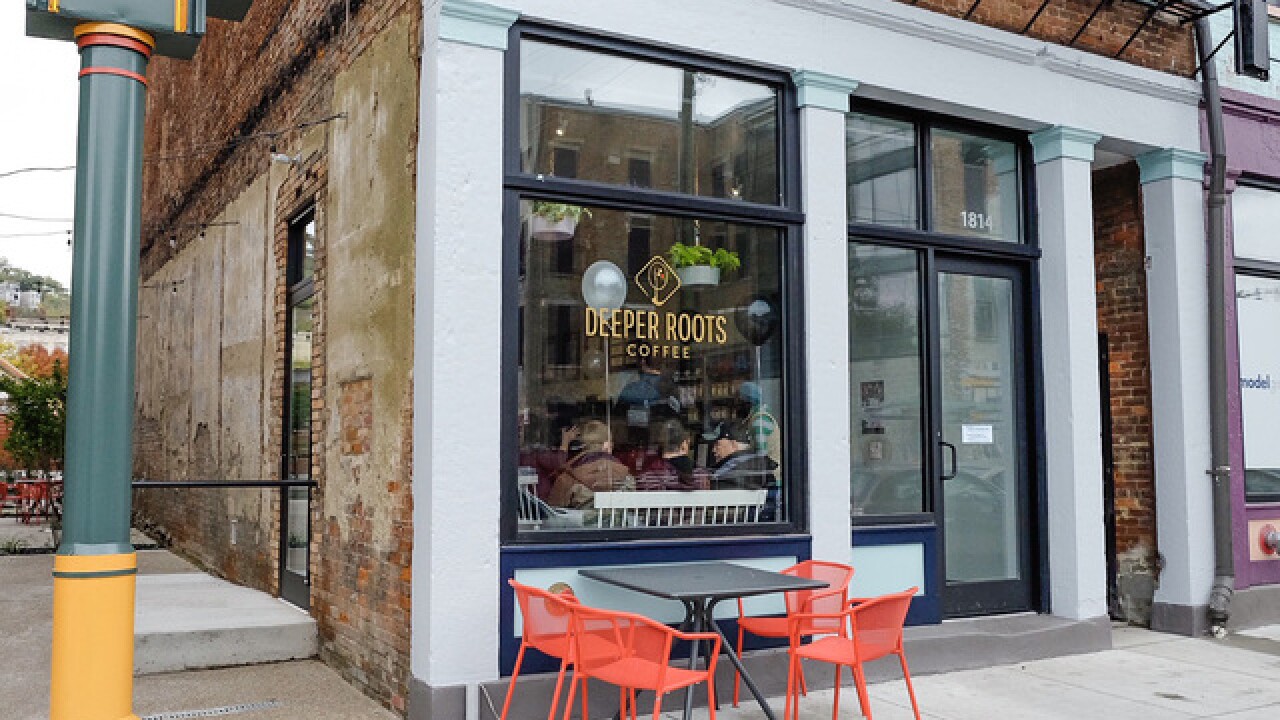 Copyright 2017 Scripps Media, Inc. All rights reserved. This material may not be published, broadcast, rewritten, or redistributed.
Provided
<p>Deeper Roots has opened its second location near Findlay Market at 1814 Race St.</p>

CINCINNATI -- Patrons can expect to feel right at home inside Deeper Roots Coffee's new shop next to Findlay Market in Over-the-Rhine.

There's no formal counter here, only a center island that lets you pony up right next to the baristas while they brew. The 1814 Race St. location, Deeper Roots' second, is part of an overall growth spurt that includes a new, larger production space in the West End, too.

"It feels like you're walking into somebody's kitchen, which is a beautiful thing, because that's where everybody likes to hang out," said Jon Lewis, the company's director of retail. "The community table, the open format, it's a place for us to share what we love."

It's a project that has been over a year in the making.

Deeper Roots, Lewis said, is the first dedicated coffee shop in the Findlay Market neighborhood and the second retail tenant along the 1800 block of Race Street, which the Model Group is working to reactivate.

Epicurean Mercantile Co., an urban grocery, opened in May at 1818 Race St., and Cherbourg, a gluten- and nut-free bakery based in Columbus, is set for a spring debut just a few doors down. Apartments are leased above.

"We were very lucky to get Deeper Roots for this location," said Matt Reckman, assistant director of property management for the Model Group. "They could have their pick of almost any neighborhood but wanted to be part of the bigger picture for what's happening around here. They're already proving to be a great fit."

Deeper Roots, for its own part, has enjoyed organic growth over the years. The company got its start in 2006 and began roasting and distributing in 2011, with a commitment to ethical sourcing and specialty brews.

"More people, when they catch on to that, they agree that great coffee is worth the price tag," Lewis said. "It's still a very affordable luxury."

Besides its wholesale business -- it sells its coffee to other shops and restaurants, including in Dayton and Columbus -- the company offers barista training and consulting and staffs a small maintenance/tech department to repair coffee machines.

In 2015, Deeper Roots opened its first coffee shop in Oakley. Internal discussions about a second location started in 2016.

"Oakley is phenomenal," Lewis said. "It's been a really nice place for us to sink in our roots and figure out what it means to serve our own coffee. Every community deserves a great coffeeshop."

The Findlay space is purposely small -- about 800 square feet, similar to Oakley -- but, besides the island, there's seating in a back room and a courtyard. The decor is sleek, right down to the equipment.

The front bar features a Modbar, or pour-over coffee system, atop a quartz countertop. A pour-over system allows for a more consistent cup of joe, Lewis said. On the back bar, there's a La Marzocca espresso machine, customized with walnut and brass features.

"For us, coffee service is meant to be simple, but also elegant and pleasing," he said.

The menu at Findlay also mostly mirrors Oakley's, from the coffee selection to the Sixteen Bricks toast, topped with almond butter and honey or avocado and pickled onion. But the new shop also serves goodies from Mainwood Pastry, a wholesale bakery founded by the same team behind Collective Espresso, which also serves Deeper Roots. The bar includes a few extra taps -- one, in particular, that pours Kombucha, which is new.

While Deeper Roots settles in at its new locale, the company is readying for another move, Lewis said. The team is relocating its production roasterie from Mount Healthy to the West End the week of Nov. 6. The new facility, at 2108 Colerain Ave., is nearly triple in size.

"We outgrew our old space a long time ago," he said with a laugh. "And over the past year, we've increased our back-end staffing just to handle our growth."

While the initial phase will lack a retail front, he said, they're exploring roasterie tours and tastings in the future.

"It's all part of growing up," Lewis said. "It will give us a lot more room for administration, for storage, and in terms of roasting capacity, it's designed with room to grow."

"It's exciting," Lewis said. "The Market is thriving, and the neighborhood is alive. There's a lot going on. We just want to be a part of what's happening in the city -- to find a small space for ourselves in the midst of everything else."