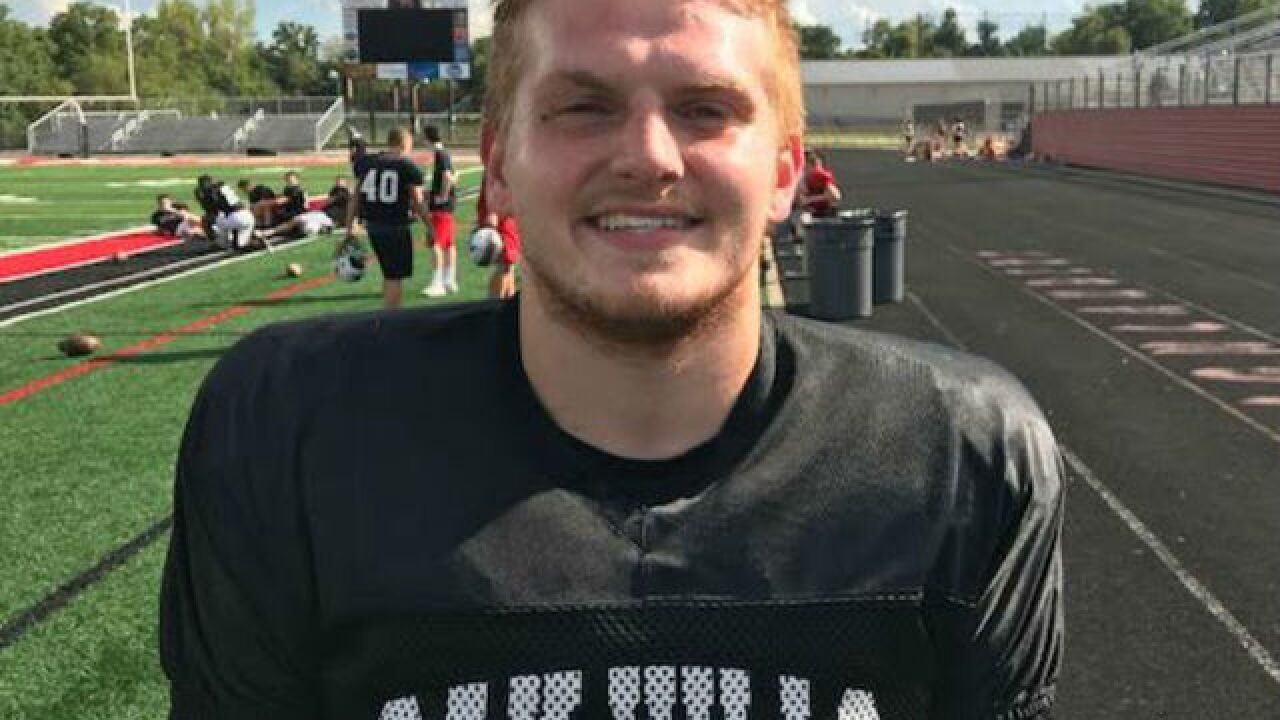 Copyright 2018 Scripps Media, Inc. All rights reserved. This material may not be published, broadcast, rewritten, or redistributed.
<p>Oak Hills senior nose guard Joey Weikel has enjoyed the support from the community after the Highlanders won their first two games this season. (Photo by Mike Dyer)</p>

GREEN TOWNSHIP, Ohio -- Oak Hills senior guard Alex Hughes has heard the naysayers and critics all too often. Even with back-to-back wins to open this season, the Highlanders understand there are those who don't believe they've really recovered from their winless 2017.

"I hear it all the time," Hughes said at Tuesday's practice. "''It's a fluke. You guys won't win any more games.' I know in my heart we will do good this year."

Sporting the most points scored in the Greater Miami Conference the first two weeks (77 points), Oak Hills is enjoying the successful start. Students, teachers and administrators have lauded the football players throughout the school. The recognition is nice, but the players and coaches are keeping it in perspective.

"It's a whole lot easier to walk around the hallways on Monday after you win than after a loss," Oak Hills coach Kyle Prosser said. "It's been a lot of fun."

Oak Hills (2-0) hasn't opened a season with two wins since 2012, but the Highlanders defeated defending Indiana Class 4A state champion East Central 28-21 Aug. 24 and followed that up with a 49-0 win over Dayton Dunbar Aug. 31.

"To see people in the community and they see you with your Oak Hills stuff on, they say 'Good job,' or they give you a handshake and they ask for your name," Oak Hills senior nose guard Joey Weikel said. "It's been really good for us."

The Highlanders face a solid test at Mason (1-1) Friday night in the Greater Miami Conference opener.

"With (Mason coach Brian Castner) up there and his Comets, he always has them ready," Oak Hills coach Kyle Prosser. "I know they are a little bit younger this year, but they're very disciplined and physical. We've got to make sure we go in and match their intensity and match their physicality, and if we dom, it will be a nice game."

Oak Hills senior quarterback Ethan Myers has played well through the two games. He was 13 of 19 passing for 195 yards and two touchdowns last week against Dunbar. He threw for three touchdowns and rushed for another in the opener.

"Watching him kind of come out of Jake's shadow this year has been fun," Prosser said. "Watching him look at me every week and go, 'I told you I could do it,' but not ever say it has been fun, too. He's been hungry, and he wants to prove.

"And he's a heck of a quarterback."

Senior wide receiver Jacob Berkemeier, a three-year starter, has nine receptions for 149 yards and two touchdowns. His leadership has been evident as a team captain.

"It's been neat to watch him excel in that role as well," Prosser said.

Weikel and senior defensive back Balor Appiarius are also among the leaders as captains. The seniors have worked under the leadership of Prosser for three consecutive seasons. That continuity has been key. The 'We Over Me' motto is evident.

"We really wanted to stress the 'we' factor in the sense that everyone can't get the limelight, but when they do, it's because of everyone's role on the team -- even our scout guys," Prosser said.