Not just for breakfast anymore, Moonrise Doughnuts finds a niche catering to the evening crowds 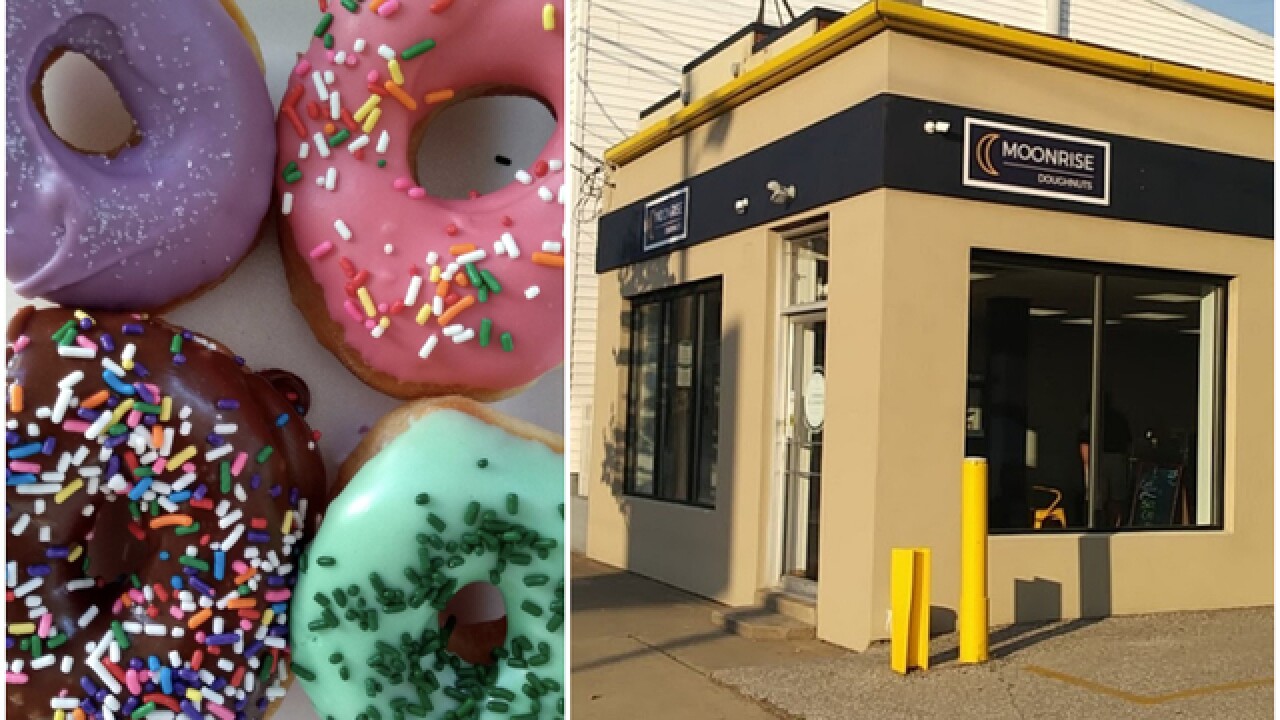 LATONIA, Ky. -- One of Keith Bales' fondest memories of growing up in the Covington neighborhood of Latonia is of eating hot, freshly baked doughnuts from the former Latonia Bakery -- in the evening.

The bakery stopped doing that sometime in the '80s, he said, but customers like him reminisced about it long after. Bales heard them reminisce so often that he thought someone ought to try it again.

So, in August 2017, Bales opened Moonrise Doughnuts at 3718 Winston Ave. He's been selling doughnuts by the dozen ever since -- about 135 dozen per day, he said.

That number's even more impressive when you consider the store's only open from 5 to 10 p.m. Tuesday to Thursday, and 6 to 11 p.m. Friday and Saturday. That's just 25 hours a week -- 324 doughnuts an hour.

Covington City Council Member Bill Wells is a fan. Before drops by, he posts his plans on Facebook, to see if any neighbors want him to pick them up a couple dozen. He won't guarantee he can buy the kind they want, however, because the doughnuts sell out too quickly.

Wells remembers seeing about 100 people lined up to get into the shop one Saturday night. Moonrise, which tops out at about 2,000 square feet largely devoted to the bakery, has only a few tables for customers.

"It's not just a bakery, it's like a social club," Wells said. "People sit down and chat. Everybody's always smiling."

In some ways, Bales seems unlikely to have become a successful restaurateur. He's worked for city government and recently retired from the Kentucky Justice and Public Safety Cabinet, for which he ran a regional juvenile detention center in Newport.

However, he's owned several businesses, including a janitorial service and a nuisance abatement business. The Latonia resident also briefly owned a sandwich shop in Covington in 1989 but sold it after a year.

He knew little about making doughnuts before he opened Moonrise, but he knew the right people to hire: Creative people with culinary backgrounds.

Simple glazed doughnuts are probably the No. 1 seller, he said, followed by chocolate yeast. His staff comes up with some unique doughnuts, such as a lemon-blueberry cake doughnut and a green tea doughnut made with matcha.

Helped by growth of Latonia

Bales won't talk about how much money he's making or how much he's invested in the business, but he did say that he's selling about twice as many doughnuts as he expected when he opened the shop. Customers telling others about the shop via Facebook and other social media have been the store's only advertisements.

Wells thinks that some of the positive things happening in downtown Covington have spilled over into Latonia. Just down the street, Bard's Burgers & Chili has been featured on some national food shows, he said, and is planning to expand. Real estate prices have also spiked, he added, because there are not enough houses available for people who want to move there.

Customers aren't limited to a particular age group or demographic, he said, but noted that families tend to come around dinner time and younger people come in later in the evening and stay past the official closing time. They come from all over the Tri-State region, he said, because there are not many other places to buy fresh doughnuts at that hour.

Holtman's in Loveland open till 11

One place that does stay open late is Holtman's doughnuts in Loveland, where a second crew starts frying doughnuts in the afternoon for the evening rush, said Holtman's co-owner and marketing/brand manager Katie Plazarin.

Loveland also does much more evening business than the other locations, she said. Customers include families that stop in for dessert after dinner and those who want to buy doughnuts for the following morning.

Evening hours are not new at any of the locations, Plazarin said.

doughnuts might have a reputation as a breakfast food, she said, but they're something people will eat any time.

If you don't want to drive to Loveland to satisfy your late-night, fresh-doughnut cravings, you could try Hyde Park, where Busken Bakery's main store has been open for 24 hours a day for more than 50 years.

The store originally stayed open round the clock to feed third-shift workers at a nearby industrial complex that's no longer there, said Kathy Birkofer, director of business-to-business sales. Now, it does solid business with third-shift workers and second-shifters who want an after-work snack, she said.

There's also a rush between 11 p.m. and 3 a.m. of people coming in from bars and other nearby attractions, she said.

"I think what draws people to this location is knowing this is where everything is actually produced," she said. "Where they can come in and can get some of the freshest product off the line."