Tourney berth many years in the making 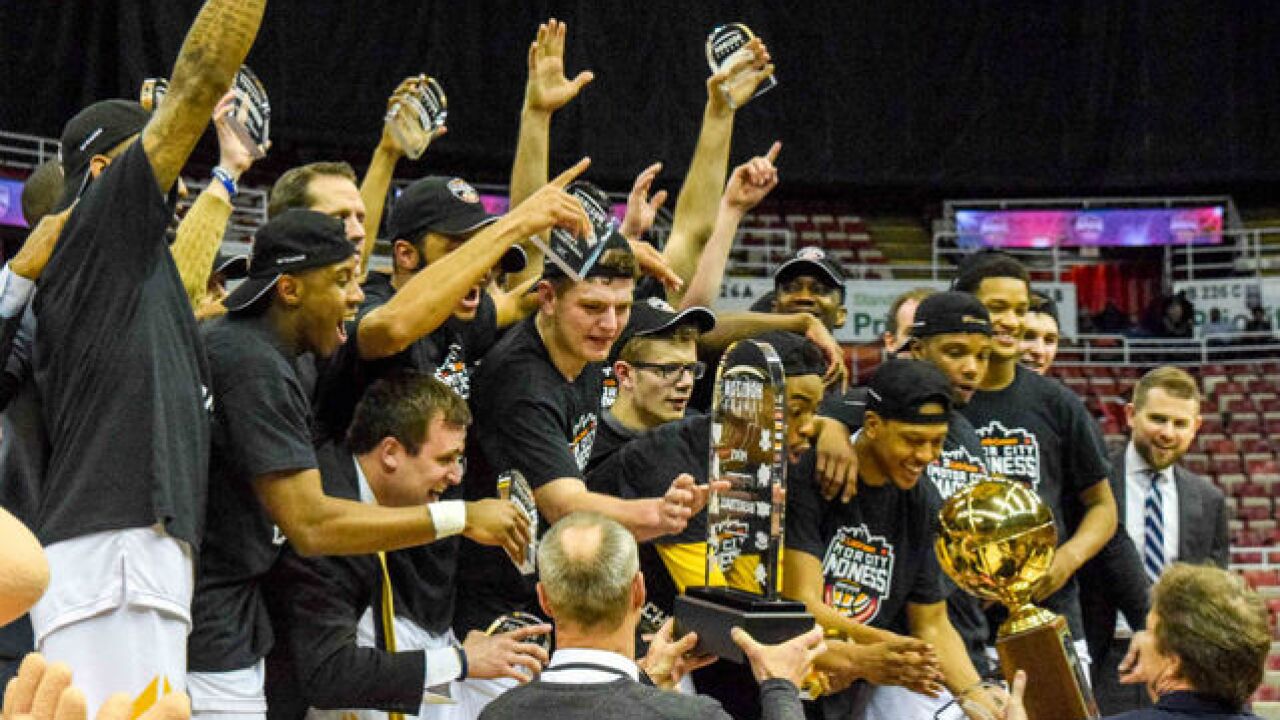 CINCINNATI -- Yes, the games have been exciting. Yes, it's great to play on a national stage in a huge event. Yes, playing in-state powerhouse Kentucky is very cool.

But despite all the hoopla surrounding Northern Kentucky University's trip to the NCAA tournament in its first season of eligibility, the achievement is about much more than brackets, national TV and buzzer beaters.

It's about a school that has strived for legitimacy since it opened in 1968, that has worked to co-habitate with the city of Highland Heights and shed its image as a commuter campus. It's also about the culmination of a bold and expensive move to jump to Division I in athletics -- one that has meant new facilities, new conferences and new faces in important jobs.

No one knows that better than Dr. Jim Votruba, former president of NKU.

As the seconds ticked down in the regular season finale for NKU, Votruba leaned over to his wife, Rachel, and whispered: "I think this is the first team we've had that is a legitimate Division I team. Everything is coming together."

Votruba was more than an interested fan. The Division I idea came up and then came to fruition during his tenure. Everything did come together the following week when the Norse won the Horizon League Tournament to earn an NCAA bid in its first year of eligibility.

"It's worked out beautifully," Votruba said. "I had no idea that we would make to the NCAA Tournament in our first year of eligibility. I dare say nobody did. You'd have to be engaging in fantasy to assert that."

That's led to exactly what Votruba hoped for from the start.

"When I see the buzz among students, staff and faculty that this first league championship has created, there's no other way this kind of enthusiasm could be accomplished," he said. "So, yes, it's meeting all my expectations so far."

The seeds of moving to Division I were planted as far back as 1997 when Votruba took over as president, although the reason for the move had little to do with sports.

"I don't believe you go Division I simply for athletics per se," Votruba said. "I think the broad context is: Where do we want to take the university? Will Division I help us do that?

"In the case of NKU, we had a very clear sense in 1997, as a result of full-scale strategic planning process, of where we wanted to take the university, and it was to a very ambitious next level. Athletics figured into that."

NKU is a relatively young school. It opened in 1968 as Northern Kentucky State College. A year later, the Highland Heights campus opened with just over a 1,000 students.

The basketball program started in 1971 in Division II. The Norse played in high school gyms that year. Regents Hall opened for the 1972-73 season.

"The day before the first game they didn't even have bleachers," said Rick Meyers, NKU's longtime and now retired sports information director, then a student. "The players, the coach, Mote Hills, and me were in there putting in temporary bleachers so there'd be somewhere for the fans to sit."

The program quickly became successful -- a winning season in the fifth year, an NCAA Division II tournament berth in the seventh year. By the time Votruba took over at president in 1997, the men's team was playing in its second straight national title game. The women's team would win D11 national titles in 2000 and 2008 under coach Nancy Winstel.

The school was growing as well. Enrollment was up to 9,000.

"We were the only public university in the commonwealth that was not DI. We had the opportunity for some natural rivalries within this region once we got playing at that level," Votruba said. "And we found out at that time, the Great Lakes Valley Conference was moving more west and moving more toward private liberal arts colleges.

"One of reasons you go DI is for brand purposes and the opportunity to affiliate with what I call aspirational institutions. The process that led us to Division I wasn't a narrow conversation about athletics but rather a broad conversation about where the university was headed."

The actual process toward going Division I didn't begin until the mid-2000s. Votruba pushed to go DI with an emphasis on basketball rather than add football, which the Board of Regents voted to do in 1997.

"The cost estimates for football were so unrealistic that I sat down with the board chair and said, 'I would like put football on hold,'" Votruba said. "There were some people who really wanted to do football. My thought was, 'If we do football, we need to stay DII because it is a budget-buster.'"

Again, Votruba wasn't looking at sports in a vacuum. He saw sports as a way to build NKU's brand. He pointed to Xavier as the example of how this could work.

Xavier was once a struggling Division I basketball program. Division II NKU, in fact, beat the Musketeers at Xavier in 1978. By the mid-2000s, Xavier was a high-profile program with a history of success and a sparkling 10,000-seat arena. Much of the growth in the university could be directly attributed to its basketball program.

"I felt and continue to feel that NKU over the years will be able to compete at the Xavier level," Votruba said.

Not everyone thought that.

But Votruba had a list of questions that had to be answered before he'd make the case to go Division I:

As far as the facilities were concerned, the biggest piece was getting a Division I-caliber arena. The 9,400-seat, $64 million BB&T Arena, completed in 2008, answered that question.

"That was a tipping point," Votruba said. "The advice I got downstate from the senate president was to build it big enough. 'You've got one shot at this.' We took a cue from Xavier. We're a little under 10,000 but the upper deck is a horseshoe. But the structurally you can make it an oval. It would add 1,000 to 1,500 seats."

After the arena was in works, Votruba was satisfied that most of the questions had been answered. But as university president, he wanted to be sure of one other thing:

"The last question that had to be asked was, 'Can we do it with integrity?' DI can generate enormous pressure to win. You win by recruiting and retaining outstanding coaches and outstanding players. On the players' side, the competition is at two levels. The first is how effectively can we compete for the best athletes? No. 2, how successful will we be for maintaining eligibility for those athletes? You got to get them and you got to keep them."

Add to that, staying with the rules. Votruba cited rules violations at Louisville and Baylor, where prostitutes were provided for recruits. He also mentioned a bogus degree program at North Carolina.

"My question was, 'Can we do with this integrity and not cross the line in a way that embarrasses the institution?'"

Votruba decided that one way to do that was not to try to be Louisville, Baylor and North Carolina.

"I talked to a number of my counterparts who were presidents at mid-majors," he said. "They said absolutely you can. It's when you get up to the rarified air of those top schools that these things become problematic. I asked them how they paid their coaches, how they recruited their athletes, how they defined success at mid-majors. Success is not defined in terms of a national championship. It's quite often league championships like what NKU just accomplished."

The faculty was on board, Vortuba said, as long as the school's integrity would not be compromised. He agreed.

"Frankly, for a president, it's a huge embarrassment. I couldn't live with that."

Sports get the spotlight, but they shouldn't be the tail wagging the university dog.

"When an institution compromises its integrity in athletics, it bleeds into other aspects of the university," he said. "It doesn't stay with athletics. The thing I'm proud of is NKU has answered all those questions emphatically. I think we're doing it with integrity."

Votruba considered a conference match as a huge part of the move. NKU would start in the Atlantic Sun Conference in 2012, but would soon after make a move.

"I felt from the beginning that the Horizon was the place we had to be," he said. "The institutions are much like us. They're regional, metropolitan universities with similar missions with geographic proximity that allows for natural rivalries and fan travel."

A four-year probation followed the 2012 jump to Division I before the Norse became eligible for the NCAA tournament. NKU officially joined the Horizon in July of 2015.

John Brannen, a longtime Alabama assistant and Newport Central Catholic grad, took over. The Norse went 9-21 in his first season.

What had worked at the Division II level wasn't working in Division I. That's largely because of the athletes. NKU reached that level through Brannen's recruiting. He signed Drew McDonald out of NewCath, along with point guard LaVone Holland II in his first year. They are the team's top two scorers.

But the roster is made of up mostly of new players led by Kentucky's Mr. Basketball, Carson Williams. Williams and seven others are in their first year in the program.

"They're a whole different athletic specimen," said Paul Cluxton, a member of the two national runner-up teams. "They're 3, 4, 5 percent body fat guys like you'd see at Kentucky our Louisville. It's just a different athlete.

"I've just seen some really, really good basketball out of that group. For having eight new guys who have never played Division I out of 14, Johnny's done a fantastic job."

The old players and coaches are enjoying it.

Kenny Shields, the coach of the runner-up teams, shed tears at the watch party when the Norse's bid was announced.

"The foundation was built on that guy," Meyers said.

Brannen got the program over the top among mid-major terms. There will be speculation that he'll move on.

"I think our coach is just a spectacular coach," Votruba said. "When I came here I came here to build to a university, and I loved every year of it -- 15 years, it wasn't building a program or a department, it was building a university.

That question will be answered in time.

Meyers, who's been there since the beginning, is just enjoying this run.

"To see this happen is beyond a dream come to true," Meyers said. "It's almost unbelievable."

And Votruba's vision of helping the school through the athletic program has worked out nicely as well.

"I think that's the bigger story, what's the school's become," Meyers said. "It's become such a player in this region -- beyond athletics. It's become an amazing place. The people who founded it back in the '60s couldn't believe in their wildest wild dreams what's become of academic side of the house."