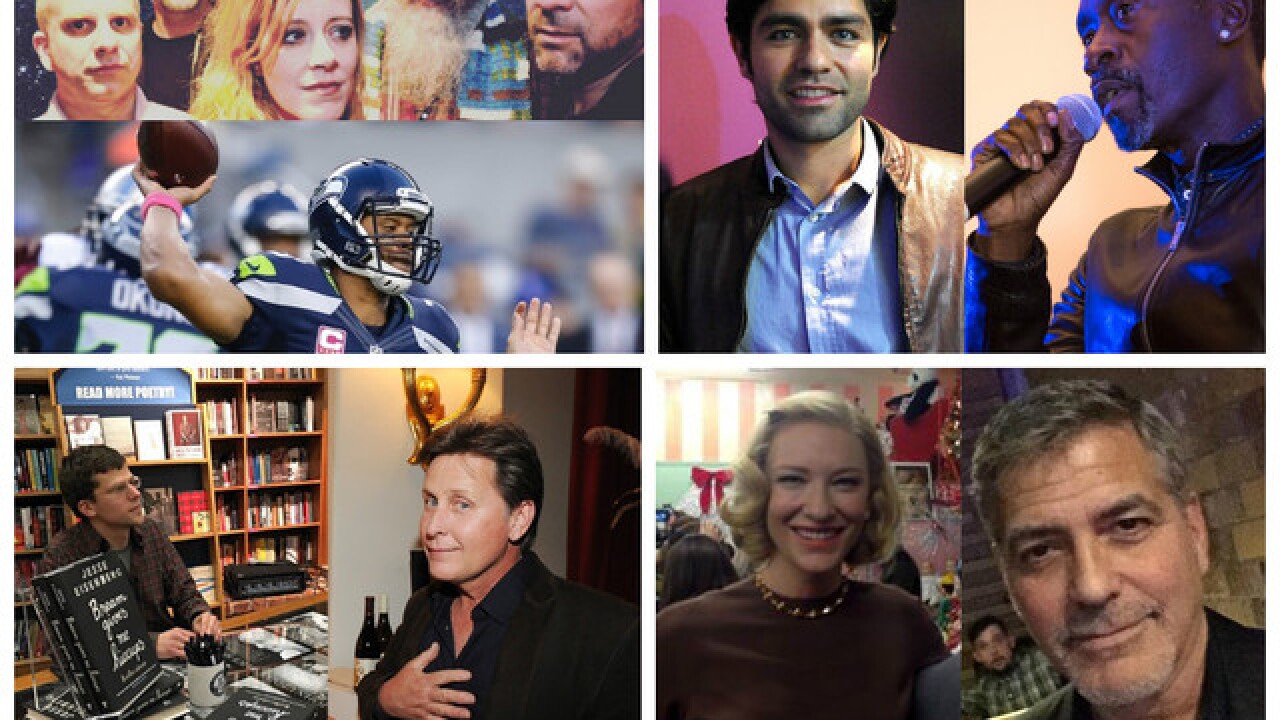 CINCINNATI -- Cincinnati has some big fans, from hometown celebrities such as George Clooney to those introduced to it because of their work.

The Queen City truly is a jewel to be admired. Here are nine times stars showed their love for the 513.

No matter where his career takes him, the son of local broadcaster Nick Clooney never forgets his roots. Clooney breathed new life into the Greater Cincinnati movie industry when he filmed parts of his political thriller, “The Ides of March,” here in 2010. He also shows Cincinnati businesses love when he is town: Last year he visited Northside brewery Urban Artifact with his wife, Amal, before they moved to Europe.

His love for the Queen City also extends to its animals: The couple saved the life of Nate, a malnourished rescue dog from Colerain Township, last December. After seeing news coverage of Nate online while living in Europe, the couple ultimately adopted the pooch for Clooney’s parents, Nick and Nina Clooney, who live in Augusta, Kentucky.

Cincinnati received plenty of love from the cast and crew of the bank heist movie “Marauders,” which was filmed in the Queen City last year. Film stars Chris Meloni, Adrian Grenier, Johnathon Schaech and Northern Kentucky native Alyshia Ochse, along with director Steven C. Miller, were spotted hanging out at various places around town when not filming. Miller went so far as to recast the setting of his film from Chicago to Cincinnati, and after production wrapped, Grenier declared our town to be "a new favorite city."

Aw, now I really feel all mushy and nostalgic. Gonna miss the cast & crew of #maraudersmovie - I'm leaving with such a great experience for my memories and many new friends (including a new favorite city: #cincinnati) - one more scene and it's a wrap.

A photo posted by Adrian Grenier (@adriangrenier) on

The actor son of Dayton, Ohio, native Martin Sheen became a Cincinnati staple in 2012 after coming here to make a small budget film. In the past four years fans have spotted him at multiple places across the city. He thrilled many residents of Over-the-Rhine earlier this year when he praised the city and said he would love to move into the neighborhood someday.

Local alternative band Wussy formed in 2001 and currently makes its albums through Northside's Shake It record label. The band debuted its new album, "Forever Sounds," at the Woodward Theatre in February before kicking off a European tour. As the band's fame grows, founder Chuck Cleaver said he is happy to praise the Queen City wherever he goes.

It took the Academy Award-nominated actor nearly a decade to make his Miles Davis biopic "Miles Ahead." Cheadle filmed the movie, which he starred in and directed, in Cincinnati in 2014. He hosted a special screening of the film at the Esquire Theatre earlier this year, and on the red carpet, Cheadle told reporters that the movie would not have happened without Cincinnati. He also hinted he would like to shoot another movie here sometime in the near future.

The actor and author heaped praise on the level of art and culture in Cincinnati during a visit to Joseph-Beth Booksellers in January for a signing of his new book, "Bream Gives Me Hiccups."

"I am continuously amazed because I am from New York, and we live in a real bubble there, and we don't realize there are wonderful things outside of New York," he said. "So to come to a place like this and see more art and interesting things to do per capita than anywhere else I have been is incredible."

The actresses discovered the wonder that is Cincinnati in 2014 as they filmed the 1950s-era drama "Carol" here. Blanchett and Mara praised Cincinnati during the press build-up for the movie's nationwide release last year.

“It’s been phenomenal shooting in Cincinnati actually,” Blanchett said. “The architecture here is phenomenal. There’s so many buildings that haven’t been ... gentrified. Everyone, the fire department and police have been so cooperative.”

The Seattle Seahawks quarterback shared his fondness for the Queen City during an interview in October with ESPN reporter Coley Harvey before a game against the Bengals at Paul Brown Stadium.

Wilson was born in Christ Hospital but only spent a short time in Cincinnati before his family moved to West Virginia. It was enough time for Wilson to fall in love with Skyline Chili and the Cincinnati Reds.

"We (Wilson's family) would go back up there every year a few times a year, so ... I used to love watching the Cincinnati Reds," Wilson said. "My dad always used to talk about the Bengals even though he was a huge Chargers fan, Anthony Munoz and guys like that. There's a bunch of memories watching them play. Growing up I used to love their jerseys. Like I said, I have very fond memories."

The singer's visit to Cincinnati in July last year changed her life. No really, it did. Clarkson Tweeted her love of Downtown restaurant Boca before a concert at Riverbend Music Center. She highly recommends trying the beet goat cheese salad.

Best restaurant in Cincinnati hands down has to be Boca on 6th. Just had dinner there. Changed my life #BeetGoatCheeseSalad #HappyBDayMom :)

It felt right to include the 19th-century British author of such classics as "Oliver Twist" and "A Christmas Carol" on this list of famous people. Sure, the idea of "celebrity" didn't quite exist in Dickens's day, but novels were the main form of entertainment at the time and the writer was at the top of his game.

Dickens stopped in the Queen City during a tour of the United States in the 1840s. He published his reflections on the journey in 1842 in "American Notes," shining a bright light on how Cincinnati was progressing to the rest of the world. He found the town of about 50,000 people at the time "a beautiful city; cheerful, thriving and animated. I have not often seen a place that commands itself so favorably and pleasantly to a stranger at first glance as this does."