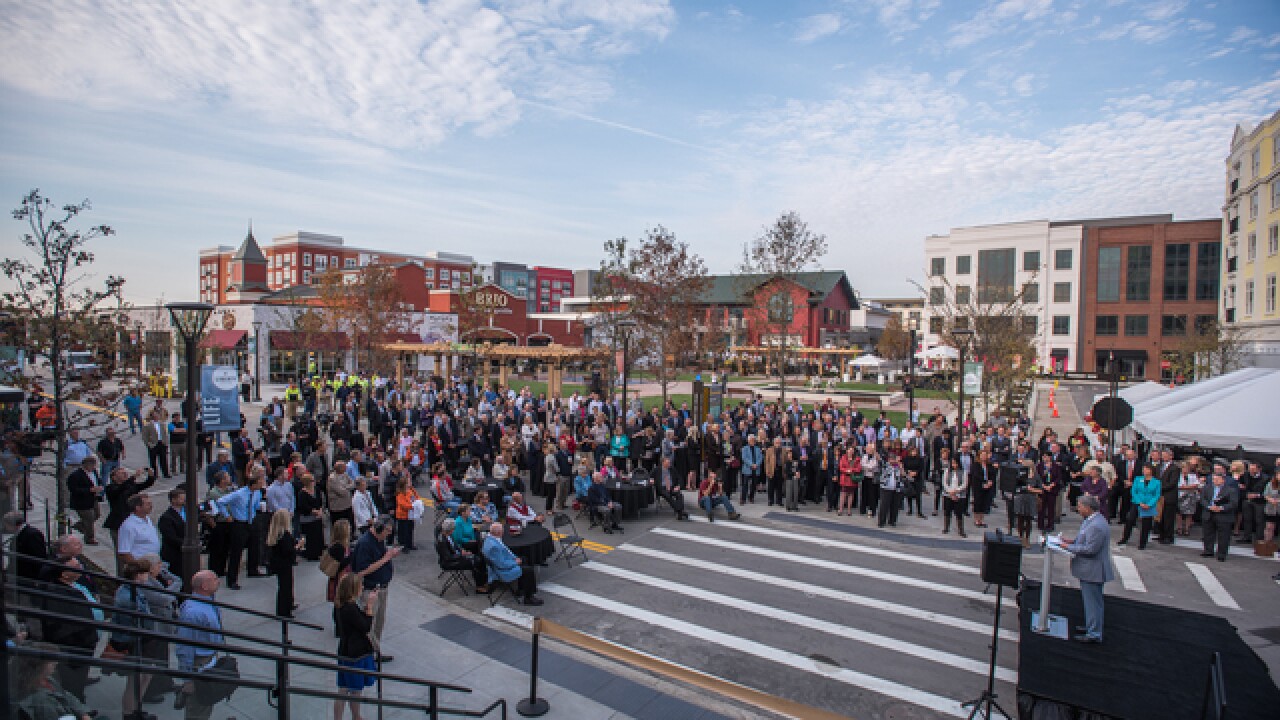 Copyright 2018 Scripps Media, Inc. All rights reserved. This material may not be published, broadcast, rewritten, or redistributed.
Phil Didion
A large crowd of those involved in the Liberty Center development process listen to Steiner + Assosciates CEO and Founder, Yaromir Steiner at the Liberty Center grand opening and ribbon cutting ceremony on the morning of Thursday, October 22, 2015 (Phil Didion for WCPO)

LIBERTY TOWNSHIP, Ohio -- The Liberty Center project in Butler County could be turning into a problem child for the New York-based company that financed the construction of its retail space.

The CEO of Apollo Commercial Real Estate Finance Inc. told shareholders in a second quarter earnings call Wednesday that Liberty Center's $165 million loan is “high up on our radar screen in terms of loans that we’re spending a lot of time on” because of lower than expected occupancy rates.

But spokeswoman Jackie Reau said the project has seen a 12 percent increase in the number of cars entering its garages this year and some new tenant announcements could be coming next month.

“We all know that U.S. retail has been soft,” Reau said. “The reality is retailers are opening fewer stores as they kind of determine their next steps. Liberty Center has a really aggressive leasing strategy and the leasing team has been working very hard to kind of fill in that mix.”

CEO Stuart Rothstein said Apollo’s Liberty Center loan is scheduled to mature next May, but refinancing it would be a challenge today based on the retail center’s occupancy in the low 80 percent range. He said the business plan assumed the center would be above 90 percent occupancy by the time its construction loan came due.

But it’s “a mixed bag” when it comes to clothing and specialty retailers at Liberty Center.

“Some are doing extremely well,” Rothstein said. “Some are struggling. It's really a matter of finding the right merchandising mix and doing what's necessary to get the asset more well-leased than it is today.”

As WCPO reported in 2015, those specialty retailers are crucial to the long-term viability of the project, based on a consultant’s estimate that only 30 percent of total retail sales would come from anchors, such as Dillard’s Inc. and Dick’s Sporting Goods.

St. Louis-based Peckham, Guyton, Albers & Viets Inc., or PGAV, told Butler County officials in 2014 that Liberty Center would generate $264 million in annual retail sales by 2020, including $183.6 million from non-anchor retail tenants. Those retail estimates formed the basis for PGAV’s assessment that the project would generate sufficient fees to cover debt service for $49 million in bonds that paid for streets, garages, storm-drainage systems and other infrastructure.

But PGAV also warned that “reduced performance” by retail tenants could trim the payments available for debt service by more than 25 percent to $88 million. That’s still more than the $82.4 million required for all public debt, but the consultant included an assumption that retail sales would grow by 1.5 percent per year. And it based its revenue estimates not on an actual tenant roster, but “sales expectations for the tenants most likely to lease space at a regional shopping center of the type proposed for Liberty Town Center.”