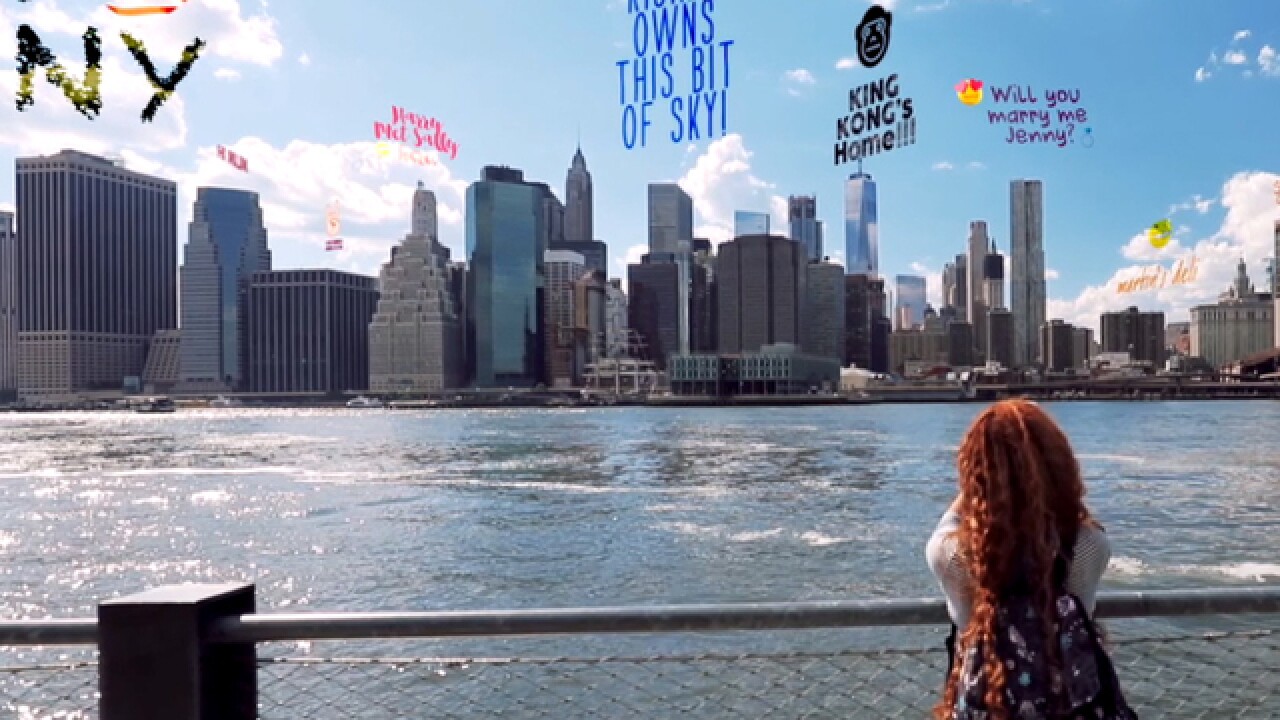 The Cincinnati skyline could look a little bit different with the help of a new augmented-reality app.

"It's like real-time geotagging, because it's always going to be there," said Skrite co-founder Arshia Siddique.

The permanence of Skrite messages isn't the only thing setting the app apart. Rather than seeking content created by developers, Skrite users create the app's content themselves.

"Our user is not dependent on the developer," Siddique said.

An individual with the app holds a phone toward the sky, chooses a spot and writes a message or uploads a photo.

Messages and photos can be set to public or private. Public messages can be viewed by anyone with the app. Those set to private can be seen only by individuals with whom they're shared.

Because messages can only be viewed by others with the app, even those set to public have a sense of hiddenness.

"You have to know that it's there to look for it," said Tony Liao, an assistant professor in University of Cincinnati's communication department.

The app works both indoors and outdoors. Users also can "teleport" to view the sky in other locations.

Siddique and co-founder Rishab Jain came up with the idea for the app after recognizing the sky as the only thing in the world that wasn't monetized.

"We wanted to sell the air or own the sky," Siddique said.

By incorporating augmented reality, they hope to encourage people to interact with others and experience the world beyond computer screens.

"We are trying to make the interaction much more real," Siddique said.

While some might question whether augmented reality fosters authentic interaction or distracts from it, the technology can be like an added layer to the natural environment, Liao said.

"With augmented reality, you can add a context that sort of enhances or helps people understand reality," Liao said.

Place-based messaging also can potentially challenge social norms, he said. Authority to decide the appearance of a building or public space is typically granted based on power or wealth. With augmented reality, anyone with a compatible phone can leave a message.

"It challenges who gets to say something in a particular place," Liao said.

Moving "the internet off of the screen and onto the place" has potential drawbacks as well, he said.

"Whenever you enable user-generated content … you get some really interesting stuff and some really terrible stuff," he said.

As with other social-media and digital-messaging platforms, augmented reality may raise concerns related to privacy and harassment.

"It follows you in a more visual way and is more intricately linked to physical space," Liao said.

Skrite does have systems in place to detect nudity and pornographic writing, Siddique said.

With users already taking to the app, she hopes to see its use expand to business, entertainment and advertising.

"We would like to see the world changing to using only augmented reality to communicate," Siddique said.

A version of the app for Android operating systems is currently in development and is expected to launch in September.