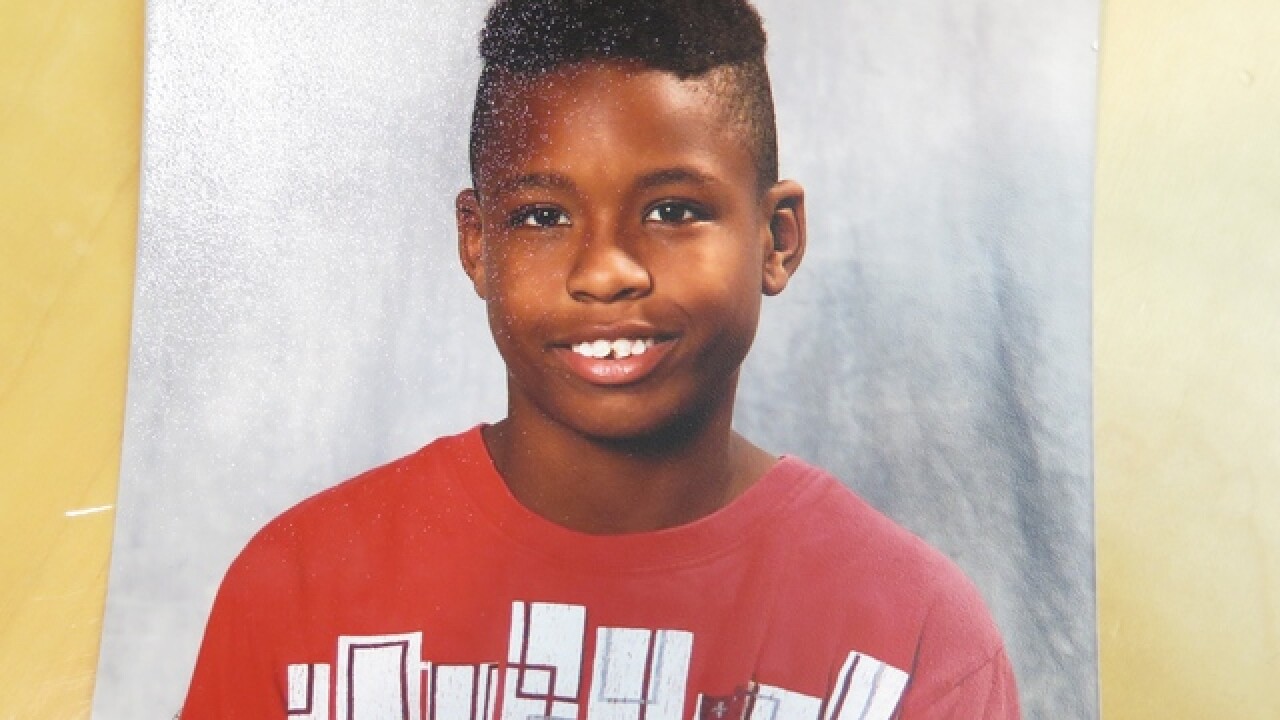 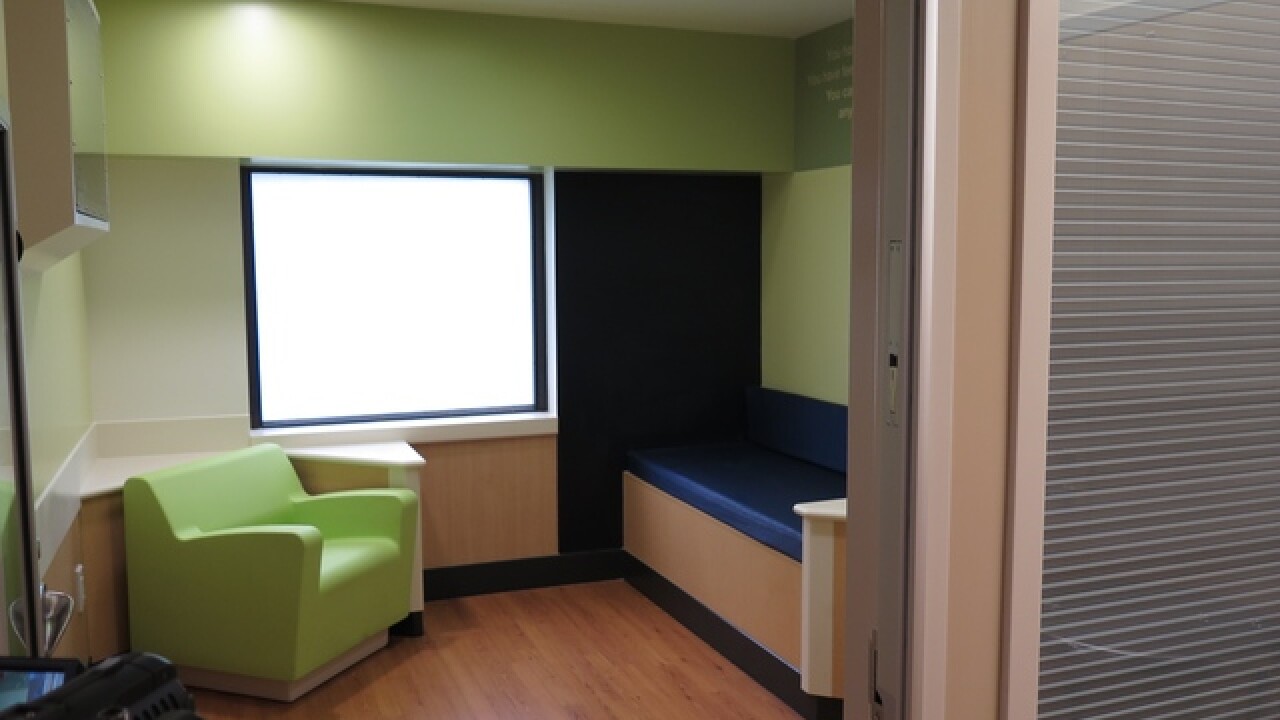 But when things don't go the way Julian expects, his autism can cause him to act out in dangerous ways.

"It's a crisis," Holbrook said. "One time we were driving about 40 miles per hour, and he jumped out of the car in the middle of an intersection. He got out, rolled and ran down the street."

After episodes like that, Holbrook takes Julian, who is 13, to the emergency room at Cincinnati Children's Hospital Medical Center. In the past, the noises and commotion there have made Julian feel even worse.

But it was different last time they had to go. That's because, instead of waiting in the emergency room, Holbrook's family was quickly escorted to the new Kindervelt Psychiatric Emergency Assessment Center, known as the KV PEACe for short. The center consists of six rooms in a quiet part of the hospital. The rooms are painted in soothing colors and outfitted with comfortable chairs and couches for young patients and their families. The overhead lights can be dimmed. Young patients can watch TV in a calm place while they wait to be evaluated by doctors and nurses. And there is nothing in the rooms that children in distress can use to hurt themselves or others.

"It doesn't feel dark and dull. At that moment, you are feeling kind of dark and dull because you don't know what's going to happen in a crisis," Holbrook said.

But Julian was so relaxed in one of the new rooms during his last visit that he actually asked for a sandwich and fell asleep.

That's exactly the point of the KV PEACe.

As the number of children needing emergency mental health treatment grows each year, KV PEACe gives young patients and their families a safe space during what can be a frightening time, said Dr. Michael Sorter, director of the division of psychiatry at Cincinnati Children's.

"This allows us to slow down," Sorter said.

Taking the time necessary to give children and families the psychiatric care they require can be a struggle because of the number of young patients who need help.

Nationwide, one in five children needs mental health services sometime during childhood, said Susan Shelton, executive director of the local nonprofit MindPeace. And for one in 10 children, the mental health problem is so severe that the children are impaired, she said.

The need in Greater Cincinnati is no exception. Consider these statistics from Kindervelt:

• Cincinnati Children's has seen an increase of nearly 50 percent in mental health emergency visits over the last five years.

• An average of 20 children each day are seen in the Emergency Department for mental health emergencies.

• An average of 230 children each day need outpatient visits for mental health and behavioral health problems.

• And roughly 131 beds are occupied each day by children who need psychiatric mental health care.

Statistics like those helped convince Kindervelt to dedicate its fundraising dollars to KV PEACe for the next four years, said Tracy Smith, Kindervelt's citywide president. The fundraising organization doesn't commit to a specific dollar amount, but it usually raises about $500,000 each year, Smith said.

"One thing we really wanted to focus on was losing the stigma on mental health," Smith said. "Everybody, they hear mental health, and they don't want to talk about it."

The special rooms were completed recently and haven't been in use for very long. Cincinnati Children's is one of the few pediatric hospitals in the nation to have such a facility, Sorter said.

"Here we can take a good look at what's happening in a child's life and get to know the family and what their resources are," he said. "In other cities in the country, kids will sit in the ER for days or even weeks looking for care."

'A lot of demand'

That's not to say the KV PEACe solves all the region's problems when it comes to caring for children and adolescents with mental health problems.

Various agencies and health providers have been working for years to provide more options for families with children who are struggling with mental illness.

More than 80 schools and school districts in the region have mental health providers available to students in schools five days a week, Shelton said.

But even though Cincinnati is "way ahead of the curve" when it comes to providing mental health services in schools, she said, there are still many places here that don't have that resource.

"It's one in five kids," Shelton said. "There's still a very big demand for services."

And children whose families have private insurance have less access to care than those with government-funded health care coverage, she said. That's because private insurers tend to offer lower reimbursements to mental health care providers.

To try to help parents navigate the resources available, MindPeace has a database of all mental health providers on its website.

And the demands are getting more complicated, said Brad McMonigle, vice president for behavioral health services at Talbert House.

Talbert House operates one of several residential facilities in the region for children and adolescents experiencing acute mental health problems.

"Unfortunately getting into those programs means the family unit is really in crisis," he said. "Over the last several years, the challenges have certainly increased. So the demand on more intensive treatment has increased."

That makes treating young patients as early as possible all the more important, he said.

That's where the KV PEACe could make a real difference.

Holbrook knows first-hand. Her son, Julian, has been working with doctors and therapists at Cincinnati Children's for years. And the love and support they provide has made a huge difference for him, his parents and his younger brother and younger sister, she said.

"I would describe Julian as a child that is struggling with some mental health issues," she said. "But with the great support and the help we've received, that can be changed into a success story."

Sorter and Kindervelt's Smith said they hope the KV PEACe can be part of a lot more of those happy endings.

More information about Kindervelt and the Cincinnati Children's Hospital Psychiatric Division is available online. A searchable directory of mental health providers in the region is available at the MindPeace website.