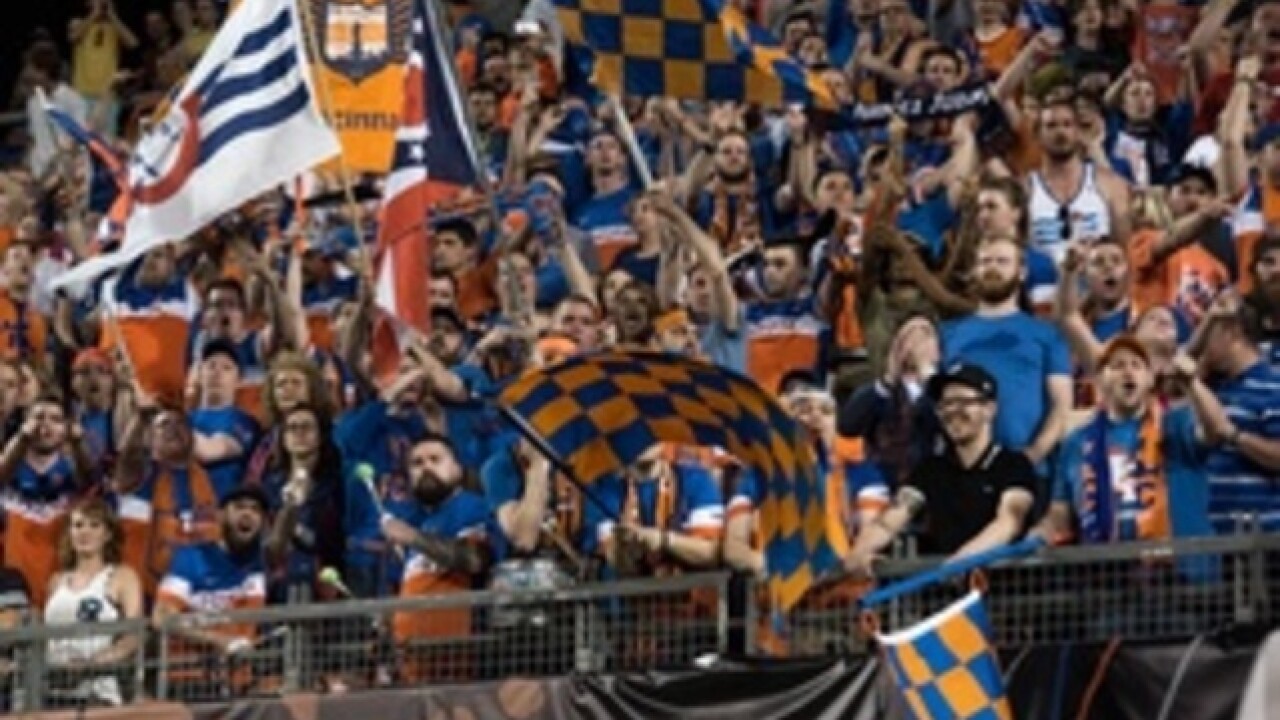 Phil Didion
<p>FC Cincinnati fans cheer for their team after the game and yell back at Louisville FC's insults and songs after their loss to Louisville FC at Nippert Stadium on Saturday April 16, 2016. Louisville FC won with a final score of 3-2 (Phil Didion for WCPO).</p>

CINCINNATI -- Some FC Cincinnati fans already are assuming the worst.

News of Major League Soccer's apparent decision to go with Nashville -- a club that is set to begin United Soccer League play in 2018 -- didn’t sit well locally among the fans that helped FC Cincinnati average crowds of 21,199 this season at Nippert Stadium.

While FC Cincinnati still is waiting to learn its fate as an MLS expansion candidate, it appears the competition is now down to three teams vying for one spot.

Nashville is one of the four finalists, along with Cincinnati, Sacramento and Detroit, for two expansion spots expected to be announced this week. The MLS Board of Governors met last Thursday in New York City to discuss expansion, among other things, and Nashville learned Monday a lawsuit trying to block Ingram from building a stadium at Metro Fairgrounds was dismissed.

“My first thought is that MLS is showing its true colors today, and those colors are green and black, as in money,” FC Cincinnati season-ticket holder Mike Bowman said when prompted with a Tweet he sent out how this means Cincinnati and/or Sacramento will be unfairly passed over. “You have two established clubs with histories of unwavering support, and one of the two are going to be left out. …

“In the end, everyone who is a fan of soccer should be disheartened by today's news. The MLS doesn't care about the fans, that much is clear. What was Nashville's average attendance last year? Yep, zero. This is a travesty and is going to make the MLS look very bad in the long run.”

While sitting in the smallest television market of the 12 original expansion applicants, FC Cincinnati’s USL attendance figures would have ranked eighth in MLS in 2017. Nashville is only a slightly bigger television market at 29th overall, compared to 36th for Cincinnati, but Music City is a tourist town that has done surprisingly well with the Predators, its National Hockey League team.

Nashville might also have been helped by the quickness with which its local government approved a stadium deal where the public will front a $275 million bond.

Bowman said he will support FC Cincinnati regardless of what happens, but noted he thinks the whole expansion process is flawed. He suggested teams should not even have been able to apply for consideration until they first showed two or more years of proven fan support at a lower division.

In that case, FC Cincinnati and Sacramento would have been the favorites, as Sacramento Republic held the USL attendance records before Cincinnati came along. One of them could still get in this round, but fans are growing more anxious not having any idea what route MLS will go.

“Terror has ensued,” FC Cincinnati fan Jesse Gill tweeted. “Please, everyone go find some sort of source of a similar event in Cincinnati.”

terror has ensued... please everyone go find some sort of source of a similar event in Cincinnati pic.twitter.com/mS8Lm5zV0p

He followed that with, “Searching for a paper bag. It’s like they don’t exist anymore. Can I breathe into a plastic bag even though that doesn't sound safe?”

searching for a paper bag...its like they don't exist anymore...can i breathe into a plastic bag even though that doesn't sound safe?

Some fans are remaining more positive, though.

Season ticket holder Scott Allison said, “Now that logic has returned after the, 'aw c'mon, man’ of the Nashville announcement, I still think we get in. Sponsorships and committed season ticket holders are nothing to sneeze at. MLS has seen what we're capable of. We brought ESPN here for a (U.S. Open Cup) non-final.”

FC Cincinnati also has been viewed as a possible shoo-in for 2019 to balance out the conferences. Miami originally was expected to be team No. 24 for MLS, joining with Los Angeles FC in 2018; however, extended delays now have them going in by 2020, thus leaving a glimmer of hope for Cincinnati.

Garber had said last November that Nippert Stadium could work for MLS in the short term, and with its proven fan support the past two seasons, FC Cincinnati appears most ready for the jump even while a soccer-specific stadium is still in the works.

Tweets like “FCC in 2019” are popping up following the news regarding Nashville.

If passed over this round, FC Cincinnati still has a shot at a rise to MLS, as two more expansion clubs will be selected at a later time, but the competition now grows back to a larger pool with the other eight original applicants back in the mix. MLS had cut the field of 12 to four at a Dec. 6 expansion committee meeting.

Regardless of the outcome, one supporter says the city should keep its chin held high.

"I truly believe the people of Cincinnati, from the owners, to the players, to the supporters, to the good people who pick up trash at the end of each game have done everything in their power to earn an MLS expansion bid," FC Cincinnati season ticket holder Connor Paquette said. "That being said, I don't make the decisions. If we get in, this day will be one of the most important in the history of the city. If we don't, we're not out yet. There will be further opportunities in the future. Either way, the people of Cincinnati should be nothing but proud. I can't wait for the 2018 season to begin either way."