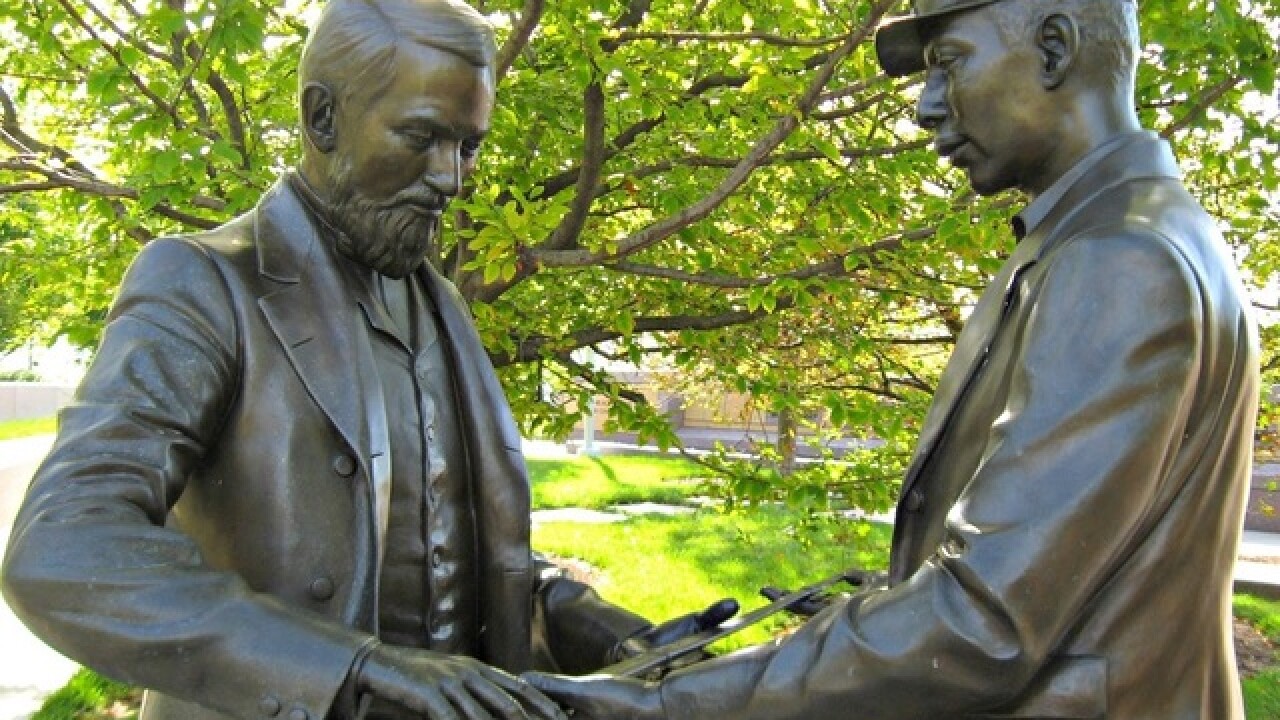 CINCINNATI -- A man commemorated in a bronze statue in Smale Park as part of the Black Brigade Monument led a fascinating life -- from birth until death.

Cincinnati Judge William Martin Dickson was a celebrated abolitionist who shared a bond with President Abraham Lincoln. They will be connected forever by blood, politics and the shocking, violent ways they left this world.

Americans know Lincoln, the brilliant, yet tragic, 16th president of the United States whose steadfast dedication to principal and history held the Union together and whose political savvy led to the downfall of slavery.

Few, however, know Dickson: the son of a poor Indiana preacher; the self-supported Miami University student; the Harvard Law School graduate; the successful lawyer and judge; the weeklong tour guide of the future president; the organizer of the Black Brigade of Cincinnati; the stealthy politician; the author-advocate; and the most notable victim of the 1889 Mount Auburn Incline accident.

Dickson’s father -- Presbyterian minister Jacob Dixon -- had two sons, John and William. William was considered to be “weak,” so John had to work a trade to help the family make ends meet after Jacob died in 1837, according to S.B. Nelson & Company’s 1894 book “History of Cincinnati and Hamilton County, Ohio.”

William’s role was to get an education, which took more strength than he was thought to have. He walked miles to school in Madison, Indiana, toting books and enough food for each week he would be away from home. He took night classes at Hanover College, worked as a janitor and got into Miami University, graduating fifth in the Class of 1846 at age 19.

The family of Cincinnati Judge Nathaniel Wright took Dickson in for two years after that while he worked as a teacher, wrote for the Cincinnati Times newspaper and studied law on his own. He got into Harvard Law and earned his degree, passed the bar in Lexington and met his future wife there in 1850 (a good move considering Annie Parker’s father and brothers were lawyers).

According to the Nelson book, Dickson didn’t think he could afford to court Parker, but he did anyway. He bought five tickets to an upcoming concert by Swedish songstress Jenny Lind, sold two to cover his costs and invited Parker and her father to attend the show. They obliged, and the ensuing courtship culminated in marriage in 1852.

Dickson taught Greek at a small Cincinnati college before being elected prosecutor of the Police Court. He quit after a year to join the law firm of Alphonso Taft, patriarch of Cincinnati’s most famous political family.

It was in September 1857 that Dickson and his wife hosted her cousin’s husband, Abraham Lincoln, who had been hired to assist East Coast defense lawyers in a patent case being tried in U.S. Circuit Court in downtown Cincinnati.

The Dicksons were living in a house at 171 Longworth St., in the block between Central Avenue and John Street. In Dickson's memoir “Lincoln at Cincinnati,” he said the future president stayed with a “friend,” yet historical sources such as Abraham Lincoln's Classroom confirm the friend was Dickson.

When Lincoln’s legal team -- which included his future Secretary of War Edwin Stanton -- decided not to have the gangly country lawyer speak in court, “he seemed greatly depressed, and gave evidence of that melancholy which so marked his character,” Dickson wrote.

The “humiliated and mortified” Lincoln, who had been paid $500 for his legal services, now had time on his hands to see the sites while the case was tried without him. For about a week, Dickson acted as Lincoln’s tour guide.

The two visited the grounds of Belmont, the downtown mansion of eccentric millionaire Nicholas Longworth that is now the Taft Museum of Art. They spent time in Room 1 of the Superior Court with Judge Bellamy Storer and lawyer Robert McCook, who would go on to gain fame in the Civil War as the leader of the Fighting McCooks. He also visited the home of Cumminsville land baron Jacob Hoffner as well as nearby Spring Grove Cemetery.

Dickson did his best to show Lincoln a good time, but he seemed unable to push aside the disappointment of being banished from the trial.

“He attached to the innocent city the displeasure that filled his bosom, shook its dust from his feet and departed never to return,” Dickson wrote.

Upon his departure, Lincoln cordially shook the hand of his hostess, Dickson's wife, and said, “You have made my stay here most agreeable, and I am a thousand times obliged to you; but in reply to your request for me to come again I must say to you I never expect to be in Cincinnati again. I have nothing against the city, but things have happened here as to make it undesirable for me ever to return here.”

Lincoln did return, four years later when campaigning for president.

Dickson said Lincoln was “entertained in princely style” when he stayed at the Burnet House “and there received with courtesy the foremost citizens, come to greet this rising star.”

Abolitionist and adviser to Lincoln

Dickson’s star rose as well, particularly as a successful abolitionist. He was an advocate of the Fugitive Slave Law, as a soldier leading the Black Brigade of Cincinnati in their successful construction of a blockade against the insurgent Confederate Army in Northern Kentucky, and as the political force that made Cincinnati the first city in the nation to allow African-Americans on public streetcars.

He traveled to Washington D.C. in his advisory role to President Lincoln, Stanton and future Chief Justice of the Supreme Court and Cincinnatian Salmon P. Chase. His outline for emancipation likely influenced Lincoln in the month before the proclamation in January 1863.

Dickson was appointed common pleas court judge by then-Ohio governor Chase in 1859. He later shared a successful downtown law practice with two of his sons.

Dickson was slowed by illness in 1866 at age 39. Poor health, however, did not stop Dickson’s progressive pen.

He published dozens of articles and pamphlets in the last 25 years of his life, attacking “monopolies, jobbery and public trickery, public dishonesty and office seeking for the mere office,” according to “History of Cincinnati and Hamilton County, Ohio.”

The death of Judge Dickson

An operating engineer took the blame for the the Mount Auburn Incline crash of Oct. 15, 1889.

He and his crew had failed to shut down the 21-year-old, 2,000-foot-long incline earlier that day when they discovered it had mechanical problems. They thought an application of oil had done the job.

The following is an account of the crash written by Cincinnati historian John H. White, Jr.:

“It was Tuesday, October 15, 1889, and the noon bells were ringing. Eight passengers bound home for lunch boarded the incline car for the ascent to Mount Auburn. The trip proceeded normally until the car approached the summit, but instead of slowing down it continued at full speed with a fearful crash into the top station. The engines continued to turn, holding the car at the top of the plane, but with such force that both the hoisting and safety cables were pulled loose. The car, now free from all restraints, lingered for an instant and then began its lightning-like plunge to the bottom. The impact sounded like an exploding boiler — the air was filled with flying bits of glass, wood, and dust. The car body wrenched loose from the truck frame and hurled itself into a grocery store across the street; the roof of the car sailed down Main Street a full one hundred feet.”

Dickson, according to a newspaper account of the tragedy, “was too old to escape from such a terrible shock” and died at age 65 in Cincinnati Hospital. Five others died as well.

Early 20th-century historian Charles Greve wrote in his “Centennial History of Cincinnati and Representative Citizens” that “Judge Dickson was learned, fearless and impartial, as a citizen he was public spirited and generous, and in private life he was exemplary to the highest degree.”

In noting Dickson’s death, a reporter described him as “a well known attorney, retired for a number of years and a warm personal friend of President Lincoln.”

Dickson was buried at Spring Grove Cemetery, 32 years after his visit there with Lincoln, in Section 30, Lot 164.