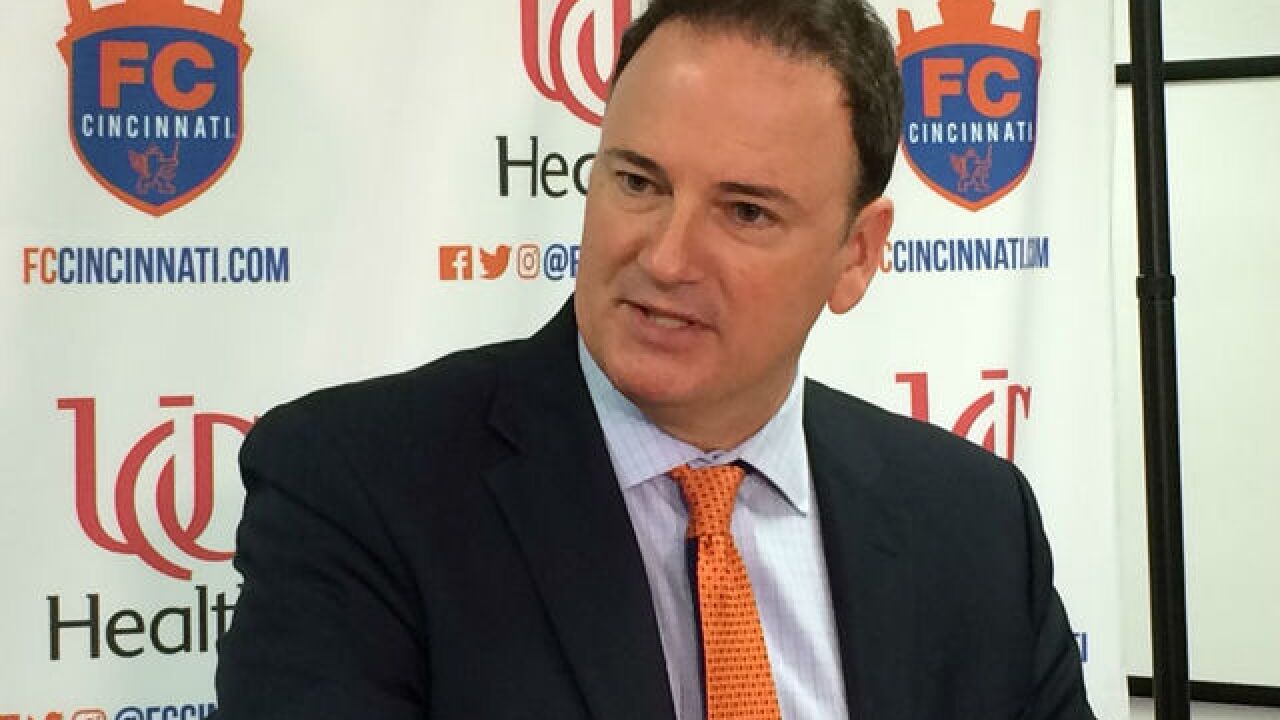 CINCINNATI – Just how serious are FC Cincinnati's plans to build a stadium in the West End -- and where, exactly, would a stadium fit in the neighborhood?

After a week of public meetings and speculation, that still remains a mystery to the public.

But some are starting to demand more answers.

The Cincinnati NAACP wants FC Cincinnati to be candid with the West End community about any plans to build a soccer stadium in the neighborhood.

In a statement, the chapter said it isn't taking a stance on the stadium just yet. The statement was released while the Cincinnati Public School Board met Wednesday morning to discuss FC Cincinnati's recent interest in the West End.

A crowd of roughly 50 filed into the Cincinnati School Board meeting Wednesday to hear more details about FC Cincinnati's plans for the West End.

But school board members didn't have many answers, either. They promised, however, to have discussions about a potential West End stadium in public view.

"I can tell you there’s been no agreement, no deals," CPS Board President Carolyn Jones said of FC Cincinnati. She said this is the first time the board has discussed the letter FC President and General Manager Jeff Berding sent to the board last week.

The soccer club has been shopping for a site to build a $200 million stadium if it wins an expansion franchise in Major League Soccer.

In a  letter to Jones , Berding laid the groundwork for a potential partnership in the West End should FC Cincinnati choose to build there. Berding was not present at Wednesday's meeting.

And school board members said they do not know why type of partnership Berding has in mind.

"Quite honestly, we don’t even know what we’re being asked to do," CPS board member Ericka Copeland-Dansby said, referring to the letter. "You a have unanimous decision of the seven of us to do engagement that’s intentional, that’s open, that’s public. What that looks like, we don’t know."

The school board meeting followed a Tuesday decision from the Cincinnati Metropolitan Housing Authority’s to grant FC Cincinnati exclusive buying rights for more than 60 empty lots in the West End.

That deal, however, didn't reveal any more about where, exactly, the team might build a West End stadium. FC Cincinnati leaders said Tuesday that they plan to use the vacant plots for new housing -- not a stadium.

Concerns and rumors continue to swirl about the stadium site.

More than a dozen people commented at Wednesday's school board meeting. Many of them echoed concerns about residents being displaced, the affect on schools and what they called a lack of transparency.

I’d say there’s about 50 or so people here. Many cheering on speakers who demand more transparency on FC Cincinnati’s plans with CPS and West End @WCPO pic.twitter.com/nPFCRw8BxP

CPS board members said they, too, would like more information from the soccer club.

"We would like, I think, to have more information about what’s really being requested," CPS board member Eve Bolton said. She added that she doesn't want FC Cincinnati to approach school board as the last piece in the "puzzle."

CPS plans to invite Berding and his team to speak at a board meeting.

FC Cincinnati's interest in the West End appears to have ramped up in recent weeks.

The club had submitted Oakley as its site option in a pitch to MLS and in its request for funding from the city and county late last year. The club also has a memorandum of understanding with owners of a property in Newport. Last year, it signed an option agreement for the Cast Fab site in Oakley.

FC Cincinnati owners say they will pay $350 million to get into MLS -- $200 million for a stadium and $150 million for the franchise fee. In late November, Cincinnati City Council agreed to kick in $37 million for infrastructure for the project, while the Hamilton County Commission offered to build a $15 million parking garage.

Last week, Berding told WCPO he was inquiring about West End land to keep his options open. The city still needs to study the viability of putting a stadium in traffic-heavy Oakley, he added.

Berding has repeated that all three sites the team announced last summer – including Newport – are still in play awaiting MLS' decision on FC Cincinnati. Last week, the MLS commissioner, Don Garber, said that decision would “hopefully” come by March.

Where would you most like to see an @fccincinnati stadium built?