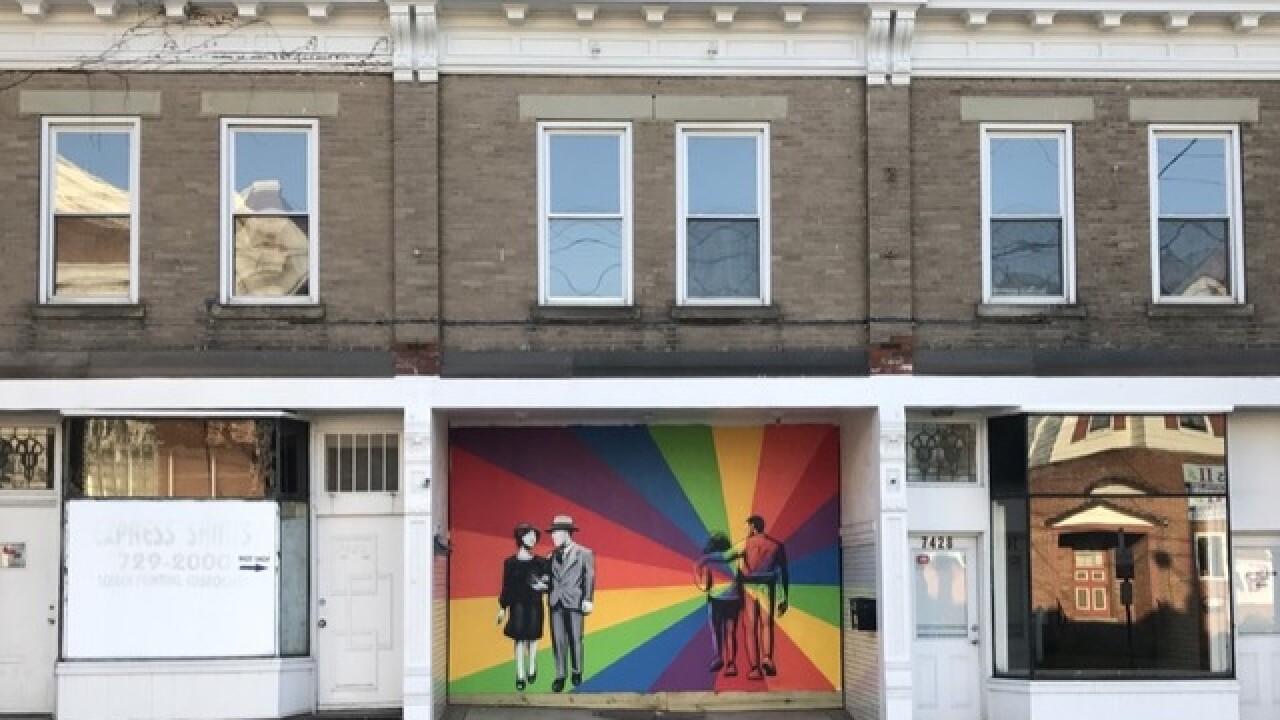 Copyright 2017 Scripps Media, Inc. All rights reserved. This material may not be published, broadcast, rewritten, or redistributed.
Liz Engel | WCPO contributor
<p>A mural on The Main, painted on the portico of the former theater, aims to bring new life to the building. An artist working on the project hopes to finish this week.</p>

MOUNT HEALTHY, Ohio -- A boarded-up theater in Mount Healthy is getting more than just a fresh coat of paint.

As part of city-led efforts to save The Main, a mural has been commissioned that it will literally change the face of the former movie house along Hamilton Avenue. Officials hope the project, which should wrap this week, will spur progress as they continue to work to bring the building back to life.

The Mount Healthy Renaissance Project, a community development corporation, is working with Over-the-Rhine's Elementz on the mural. Leaders hope the project will draw attention to a future popup shop/performance space inside the theater, another important step in their rehabilitation efforts.

The space will showcase renderings, local arts and crafts and bicentennial memorabilia. Mount Healthy is celebrating its 200th anniversary throughout 2017; celebrations peak this summer.

WCPO.com first wrote about The Main and efforts to save it in February. The theater, which dates back to 1915, served brief stints as an auction house and screen-printing shop after its closure in 1971, but has since sat largely abandoned and in a state of decay.

"This will make the theater much more vibrant and colorful, and it will draw people's attention," said Karen Arnett, president of the Mount Healthy Renaissance Project. "The building's been inconspicuous for quite some time. Maybe it will fire people's imaginations about its potential."

For Elementz, an urban arts center that offers classes in graffiti, poetry, hip-hop dance, songwriting, recording and more, this is its first formal outdoor mural project, said Tom Kent, managing director. Ben Thomas, an independent artist and former instructor at Elementz, will paint scenes reminiscent of the theater's past while incorporating the city's future and also "adding his own artistic flair," Kent said.

"He may reverse some colors or highlight some things in an unusual way, and it will be stylized in the tradition of street art," he added. "We wanted to re-imagine the front of the theater as it would have been in the old days -- with a ticket booth on the street, and people going in and out of a show. And also, a little bit, bring in some of how it looks in Mount Healthy today."

The Mount Healthy Renaissance Project is covering the cost of the mural. Arnett and others recently formed a working group, comprised of citizens and city leaders, which is working to convert the theater back to a performing arts center, a home for concerts, plays, weddings and -- just like before -- movies. But the job could prove a multi-year affair with a $1 million price tag.

The Main, as it stands, is "basically a shell," Arnett said, located a block south of Compton Road next door to Goodies Barbeque.

In 2015, the Port of Greater Cincinnati Development Authority deemed it historically significant and acquired it, and via its Landbank spent nearly $41,000 on repairs. Last year, the port turned the theater back over to Mount Healthy.

The popup shop will locate in one of two street-facing retail spaces. Committee members hope it will bring new energy to The Main; they hope to eventually rent out the space to a bakery/coffee house. There have been delays, but the plan it to mark the debut soon with a public event.

Kent is excited, mural aside. He grew up in Mount Healthy and remembers going to the Main -- and other theaters around town -- as a kid.

"As somebody who grew up in that community, I'm really glad they're taking a proactive approach to defining the city," he said. "I'm excited our organization is included in any small way to help them do that."