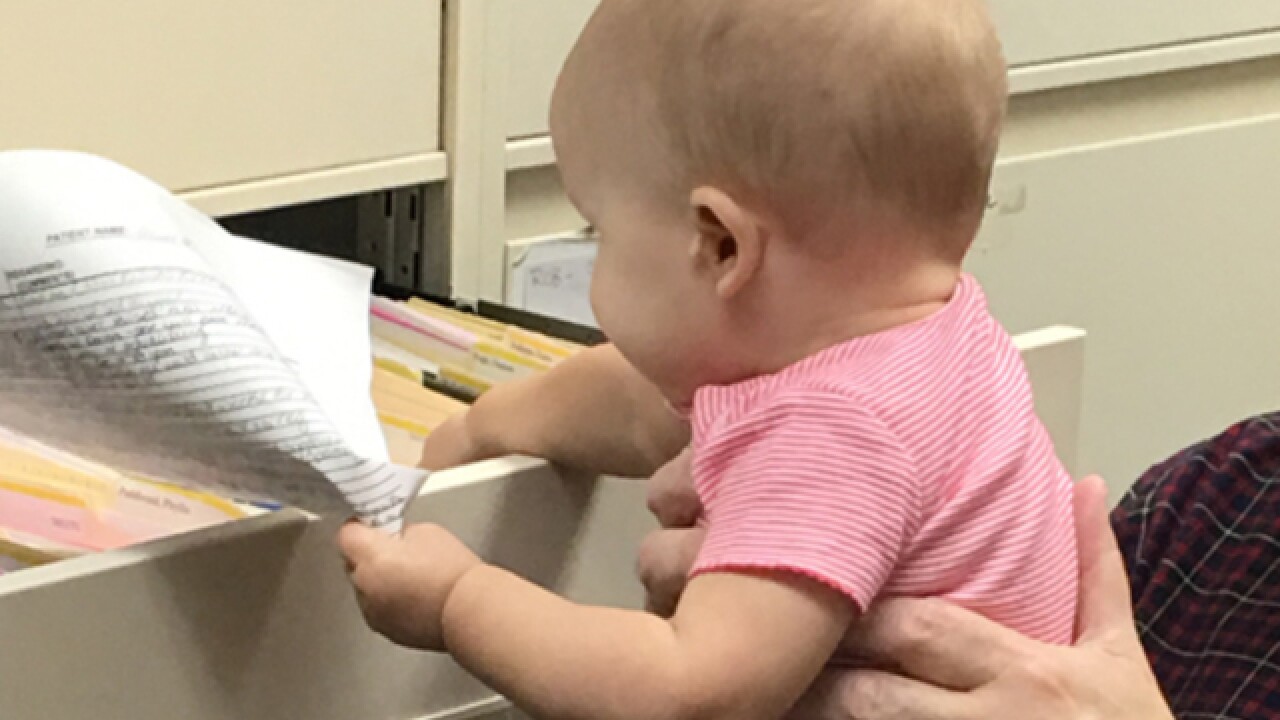 Copyright 2018 Scripps Media, Inc. All rights reserved. This material may not be published, broadcast, rewritten, or redistributed.
Provided
<p>Laura Howard, daughter of Kaylyn Riley, goes to work with her mom at a psychologist's office.</p>

U.S. Sen. Tammy Duckworth made history last month when she took her 10-day-old daughter to the Senate floor as she participated in a vote .

The newborn became the first baby allowed on the Senate floor following an intense debate among senators about allowing babies in their workplace. A resolution ultimately passed permitting senators to bring children under age 1 onto the floor.

In a tweet about the historic moment, Duckworth wrote:

Yesterday's rule change may only apply to the Senate, but I hope it can serve as a message that working families across America deserve family-friendly workplace policies

Cincinnati-area parents are echoing the senator's plea by calling for babies to be allowed in the workplace as long as they don't hinder the parent's ability to complete their work, and advocates for the change are promoting the benefits of doing so.

Carla Moquin, founder and president of the institute, said she is passionate about her company's work because of the positive effects of bringing babies into the workplace.

"Allowing babies to come to work lowers stress for infants and their parents because they don't have to be separated in those critical early months," she said. "It also makes it much more feasible for mothers who wish to breastfeed, as it is easier to maintain their milk supply through nursing instead of having to rely on a pump while they're at work."

The programs have financial benefits for working parents, too, Moquin added.

"These programs also reduce financial stresses for parents because they don't have to pay the exorbitant cost of daycare in the early months of their baby's life," she said.

Moquin said she has seen the most success with company policies that allow babies to come to work from birth to 6 months old, the point at which some babies become more mobile and start to crawl.

She expects to see more workplaces allowing the practice. Around 70 companies had active programs at the end of 2017; today, the club comprises more than 200.

She said the main hurdle facing employees wishing to bring their babies to work is getting employers to pilot a program in the first place.

"Most people are understandably skeptical at the idea of having a baby in a work environment on a daily basis. However, there is a big discrepancy between what people assume will happen versus how these programs actually work within a formal, structured policy," she said.

One of the program benefits she has seen is that it results in a more community-based environment as coworkers "bond with the babies, wanting to play with and help care for them." If parents can persuade an employer to try a program, "they are extremely likely to make the program permanent once they see how well it works," she said.

Amelia resident Kaylyn Riley has seen firsthand the benefits of pitching such a program to her former boss, Dr. Merritt Oleski of the Pain Solutions Network, during her time as a billing manager in his Sharonville office.

She brought her daughter to work from age 5 weeks to 10 months after she and Oleski discussed her maternity leave plan and concluded that she would be able to come back to work much earlier if she were able to bring the baby.

Riley was given the ability to have flexible hours at work, arriving at 9 or 10 a.m. and leaving in the afternoon. She spent most of the day babywearing, or her baby would nap in a carrier. As her daughter got a little older, she would spend time on a playmat or in a play yard.

Riley can attest to Moquin's belief that babies build a positive and supportive community environment.

"Everyone was excited to come into work when it was a 'baby day.' Everyone got to know her pretty well. She had such a good demeanor, wasn't fussy and slept all the time," Riley said.

Riley said she worked to ensure the situation was not a distraction to herself or others.

"I knew I was there to get work done. It seemed more motivating that she could come with me because I didn't have to worry about her or getting her packed up to go to the baby sitter," she said.

Having her baby at work actually "increased her productivity," she said.

Riley also credits her breastfeeding success to her ability to keep the baby with her, along with other health and bonding benefits.

"It took us at least two months, maybe three, before I was comfortable nursing, and at that point she didn't even take a bottle. If I had to drop her off at daycare I would have pumped, but we wouldn't have been able to (breastfeed)," she said.

For people hoping to propose such a program to their employers, Riley says a flexible schedule can help and agrees that a time period of six months or less would be ideal.

Some Tri-State women have not encountered such understanding circumstances in their attempts, however. Cyndi Cheik, a provider for Disability Services in Clifton, said when she recently was asked to attend a meeting of women to review some paperwork, she said she would have to bring her baby with her. She was told it wouldn't be appropriate and to find a baby sitter.

This resulted in her being unable to attend and thus "not having a voice" in the discussion, she said.

"I think you can be both professional and be a mother and wear your baby when needing to get something done," she said. "Times are changing and the rest of us need to change with it."

Cheik believes the problem is a systemic one in which women are "ostracized for waiting so long to have children, but society expects their life to end when they do.

"If a mother is able to still do her job with the same productivity as other employees and not be a distraction to customers or clients, then it should at least be considered by employers, since they are missing out on a large pool of amazing women who can double-, triple-task," she said.

Employees who wish to take their babies to their workplace may have to consider switching to a place of employment that has a baby-friendly environment.

One such place is the Red Balloon Cafe+Play which allows babywearing by employees except in food zones, according to employees Libby Adams and April Linz.

"The environment for bringing children to work at the Red Balloon Cafe+Play is very laid-back," Linz said. "There aren't many rules to bringing children, other than just doing your job the best you can."

Adams said the job helped her save on child-care costs and said her confidence and self-esteem increased because she felt she was "serving a dual purpose."

Moquin recommends that employees looking for a baby-friendly work environment use these guidelines .