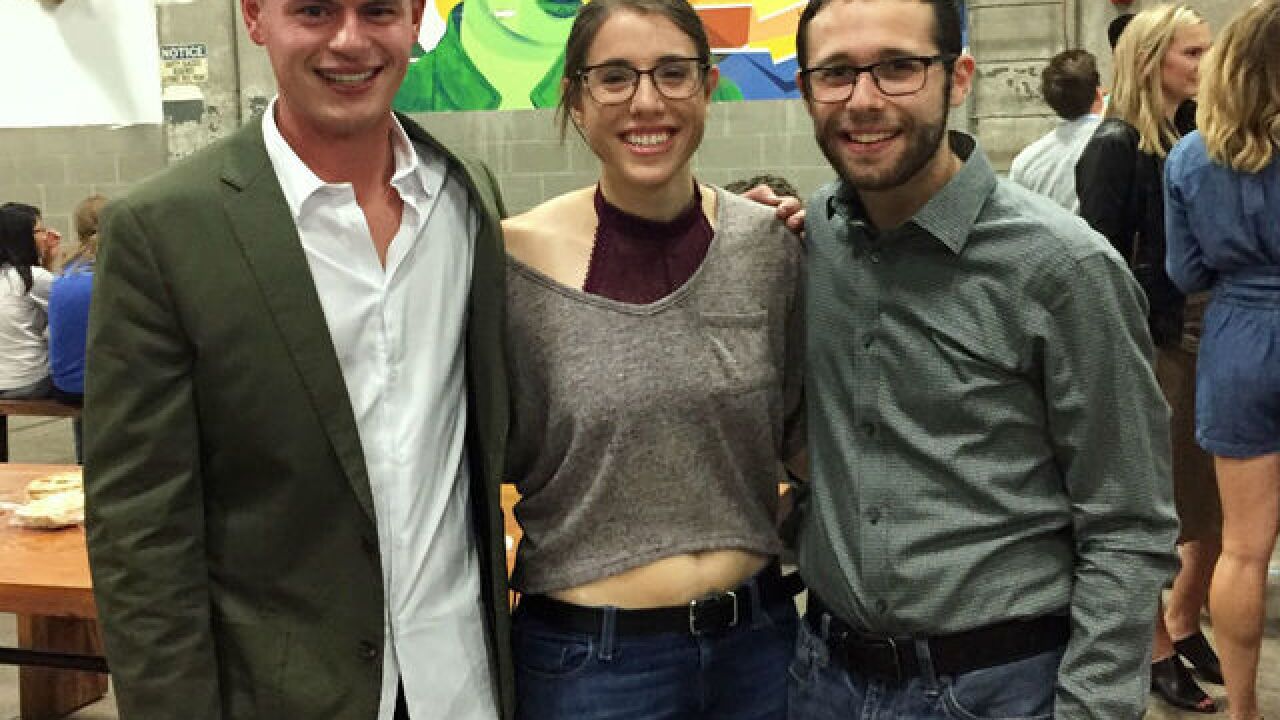 Copyright 2017 Scripps Media, Inc. All rights reserved. This material may not be published, broadcast, rewritten, or redistributed.
<p>The first residents of Cincinnati’s Moishe House were, from left, Ben Pagliaro, Becca Pollak and Sean Sherry. Moishe House organizers are looking for new residents to restart the program in Cincinnati. (Photo provided)</p>

After he settled in, he heard that Cincinnati was creating its first Moishe House, but organizers were having trouble recruiting the three young adults who would live there and host gatherings in the house.

He had previously visited a Moishe House in San Francisco and had a "really awesome" time, he said.

"I thought to myself, ‘This is the future of Judaism,' " he said of his visit.

He applied to become one of the first residents in the local house and recruited his then-roommate, Sean Sherry, and another friend, Becca Pollak. They found a large house in Columbia Tusculum that was available to rent and started the city's first Moishe House in November 2016.

He doesn't regret it.

"It was such a pleasure to be a part of it," said Pagliaro, who lived in the house for about six months and now lives in Clifton. "Every community should have one."

Their lease ran out on Oct. 31, and supporters are looking for new residents to restart the local house in a new location.

Founded in 2006, Moishe House is an Encinitas, California-based nonprofit that calls itself the "global leader of Jewish life for young adults." Central to its work of engaging Jewish millennials are 109 Moishe houses in 27 countries. The homes are shared by three to five Jewish young adult residents, who host up to two programs per week in exchange for a rent subsidy and program budget.

It was helpful to have local groups to partner with, Pagliaro said, when the local house didn't have enough money to do a really big program.

"When we look at new locations … we want to become a partner in the community, as opposed to a silo," Gold said. "We wanted to make sure the existing organizations were comfortable and excited … and everyone was."

Moishe House programs typically involve one of four themes, Gold said: Jewish holidays and culture; Jewish learning; community service; and cultivating social relationships. They might include a Friday night Shabbat meal, which begins the Jewish Sabbath observance; a meal to break the fast after Yom Kippur, the holiest day in the Jewish calendar; or games, such as dodgeball.

"We try to find a way to engage young adults on their own terms," Gold said. "We are an entry point into the Jewish journey, not an endpoint."

A highlight for Pagliaro was the first Shabbat meal at the local house.

"There was so much energy around our starting," he said. "I feel like Cincinnati had been waiting for Moishe House for 10 years, and people really wanted it."

WCPO.com recently reported on the problems Christians have getting millennials to attend churches. The same is true of Jews and synagogues.

Eighty percent of Jews not in the orthodox community are waiting until after 30 to get married, Gold said, which is a relatively new development. When people get married, they tend to make connections with Jewish groups, such as Jewish preschools. Single young adults need something to keep them connected to the community, he said.

A $15,000 Jewish Innovation Funds grant helped jump-start the first edition of the Cincinnati Moishe House, and another $15,000 grant has been pledged to restart the house. Through additional contributions from individuals and organizations such as the Jewish Federation of Cincinnati, Gold said, $44,000 of the house's $50,650 budget for 2018 has been raised.

He's hopeful the remaining funds can be raised in time to restart the house in January.

The house lacks residents, however. Organizers are looking for adults age 22-30 with a passion for connecting young Jewish adults, who are outgoing and don't mind volunteering 30-40 hours a month to help put on programs, Gold said. Those interested may apply online.

Those residents will find a house to lease together, one with a larger-than-normal living room for events, preferably in Oakley or Hyde Park, neighborhoods with the highest populations of Jewish young adults in this area, Gold said.

Of course, the new residents will also have to be comfortable welcoming visitors into their home. That's what's unique about Moishe House, Pagliaro said -- inviting people to programs there was literally welcoming them into his home.

It's also a safe place for people who want community but might not feel comfortable going to a bar, for example.

"There was a low barrier to entry. No one had to pay," he said. "You come in, make friends, do good things, and do Jewish in a way that's comfortable to you."