Moeller scraps, claws its way to a hard-fought 74-61 win over La Salle 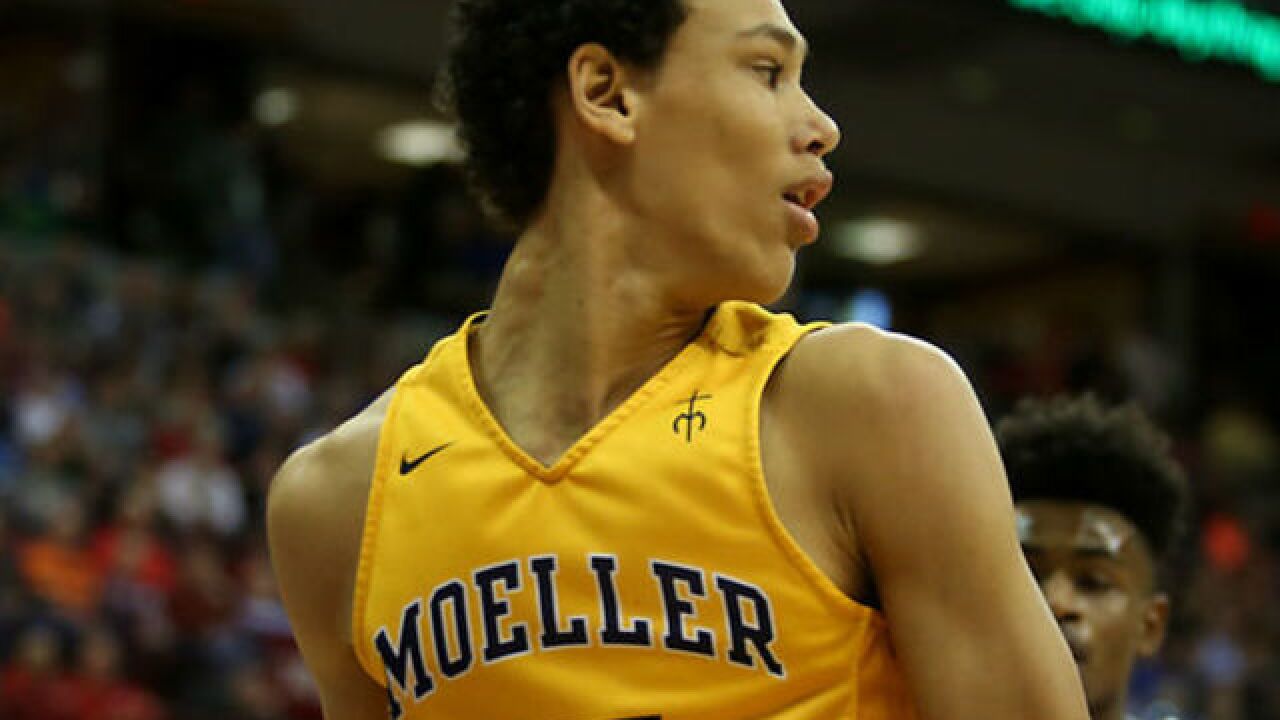 GREEN TOWNSHIP, Ohio -- Jaxson Hayes, Moeller's 6-foot-11-inch forward, took an entry pass on the block, spun and threw down a right-handed jam on the other side of the rim just 16 seconds into the game Friday night at Bill Cady Court.

The University of Texas signee's dunk was a signal that it could be a quick night of work for the favored Crusaders and an uphill 32-minute battle for host La Salle.

That wasn't how the night played out in this Greater Catholic League South division matchup. La Salle, rarely an easy venue for opposing teams, gave the Crusaders all it could handle. The Lancers led at halftime and trailed by just two points entering the fourth quarter.

Moeller eventually pulled away and won 74-61 but it wasn't easy.

"There is so much energy in such a small space," Moeller senior forward Carlos Garcia said. "I swear they turn up the heat when they come in here too. You are sweating and trying to focus and lock in and stick to your game plan. You have to stay with your boys knowing you have each other's back -- that's probably the best way to do it."

Jeremiah Davenport, a Wright State signee, was one of four Crusaders to score in double figures. He encouraged his teammates to stay calm and not get rattled.

"It's real tough (to play at La Salle)," Davenport said. "The student section -- they say anything -- I am not worried about that. You have to just keep playing. That's the focus for real."

Davenport had 14 points and five rebounds. Hayes had a team-high 18 points, six rebounds and three blocks for Moeller (11-3, 2-0 GCL South) which has not lost to an Ohio team this season.

"I am pleased with all our guys," Moeller coach Carl Kremer said. "They are really making strides each game."

"It was a good win on the road," Kremer said. "I was proud of our effort."

La Salle (7-7, 1-1 GCL South) went nose-to-nose with Moeller throughout the first half.

Kremer gave credit to the Lancers for staying poised and playing well with a smaller lineup while making some tough shots.

"In the GCL, on the road, crazy things happen, and you just move on to the next one," Kremer said.

The Lancers took their first lead (17-16) when junior guard Nathan Vogelpohl made a 3-pointer at the 5:35 mark of the second quarter.

Eddings finished with 14 points and three assists. Vogelpohl had 10 points.

"Our kids played really, really hard -- they played tough," La Salle coach Pat Goedde said. "They paid attention to the scouting report details. We were really focused. They (Moeller) just had a little more juice than us. That's the bottom line."

Moeller took advantage of a 12-2 run in the third quarter including 3-pointers by Payton and Pfriem to surge ahead by nine (39-30) three minutes into the second half.

The Lancers scrapped and clawed their way back to tie the game at 44 with two minutes left in the third.

La Salle got within six with 3:25 left, but Davenport's 3-point play gave the Crusaders a nine-point advantage that wasn't seriously threatened down the stretch.

The Crusaders play host to Massillon Washington at 5 p.m. Saturday.

Goedde said he is encouraged by the Lancers' progress as a team and the development of the younger players.

"Our marching cry is we wanted to fight to the bitter end and try to finish the game," Goedde said. "We know (Moeller is really good), but it's just the name on their jersey. We just got to keep fighting and scrapping. I was really proud."