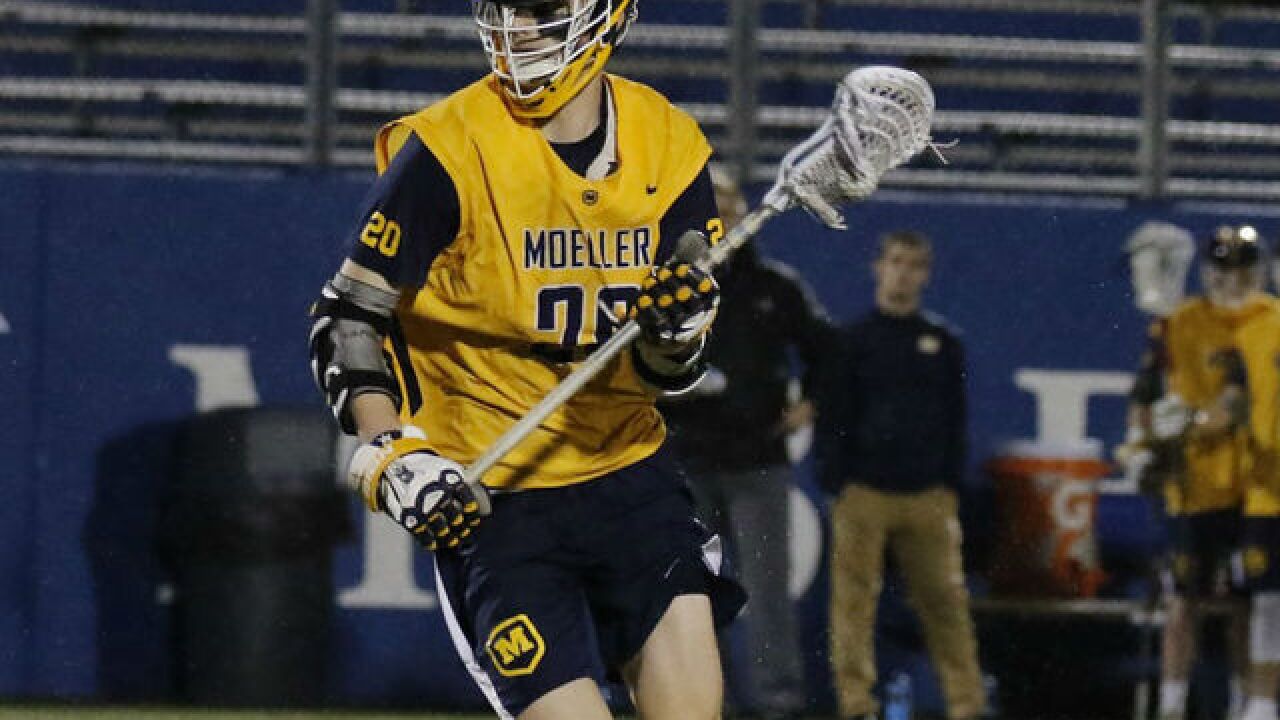 Copyright 2018 Scripps Media, Inc. All rights reserved. This material may not be published, broadcast, rewritten, or redistributed.
Provided
<p>Moeller senior midfielder Logan Dieball has 59 career goals, 36 assists and 95 points. He is signed with Syracuse. (Photo provided by Chris Malone)</p>

"You couldn't find two better guys to be on the field," Moeller coach Sean McGinnis said.

Stahanczyk, a defender, has signed with Rutgers. Dieball, a midfielder, signed with Syracuse. The duo are among the 10 Moeller players with college commitments in this senior class.

Although the 16 seniors were recognized on Senior Night against visiting Centerville Wednesday, the reigning Division I state champion Crusaders (11-5) are looking for even more recognition -- to complete another state title in a few weeks.

"We kind of had a dip in team chemistry halfway through the year, but I think it's finally starting to come together where it matters most," Dieball said. "This is the best time of the year to start clicking as a unit. We have a really good chance to make it back to state."

McGinnis said the Crusaders have weathered the storm and have adhered to the theme of "grit and glue" by competing against a very tough schedule that included losses to Indianapolis Cathedral, Upper Arlington, St. Xavier, Loveland and Montgomery Bell (Tennessee).

With the postseason starting May 15 against visiting Little Miami, McGinnis likes the direction of the Crusaders. That "grit and glue" was evident when Moeller scored with a second remaining to push Upper Arlington to overtime on May 5.

Nothing has come easy for Moeller, but mental toughness is a strong characteristic of this squad.

"Our team is really starting to come together," McGinnis said. "They're really connecting with each other on a level that you need in order to be successful during the playoffs."

Stahanczyk, 18, is a four-year varsity letter winner who has basically been a three-year starter. He is a vocal leader who has helped his teammates before practice, during games and in the locker room. If a younger player needs film of how to effectively defend, the coaching staff takes a clip from the Rutgers signee.

"He plays at such a high-elite level," McGinnis said. "His leadership is through the way he plays. When we need something to happen, we can count on Jack to make a play defensively -- whether it's causing a turnover or getting a ground ball and going down and creating transition."

During the Montgomery Bell game on April 7, McGinnis said, Stahanczyk was "unstoppable."

"When you think of a dominant defender, he has every attribute," McGinnis said. "He's athletic, he's fast and he's strong. He has an understanding of the game. He's a complete package."

Dieball entered Wednesday night on Moeller's all-time top 40 list for career goals, assists and points. He is tied for No. 27 in career goals (59) and is 25th in assists (36) and 25th in points (95). A second-year starter and third-year varsity player, Dieball is an offensive force at 6 feet 4 and 210 pounds.

Dieball had a goal and an assist in Moeller's 19-8 win over Centerville Wednesday night.

"He's hard to stop when he gets a full head of steam dodging," McGinnis said. "He's very athletic and he understands lacrosse offense to a high level."

Stahanczyk and Dieball have known each other since the seventh grade. Their personalities work well on the team. Dieball is more laid-back while Stahanczyk speaks his mind right away after a game.

Stahanczyk, 18, knows what it takes to help his teammates. He knows that opponents often regard Moeller as their "Super Bowl."

It's something Stahanczyk and his teammates take pride in, knowing they have to be ready to perform at a high level each game. They want to finish their careers in a memorable way.

"I think they definitely want to repeat the success," McGinnis said. "…They are playing for the brotherhood of Moeller lacrosse."