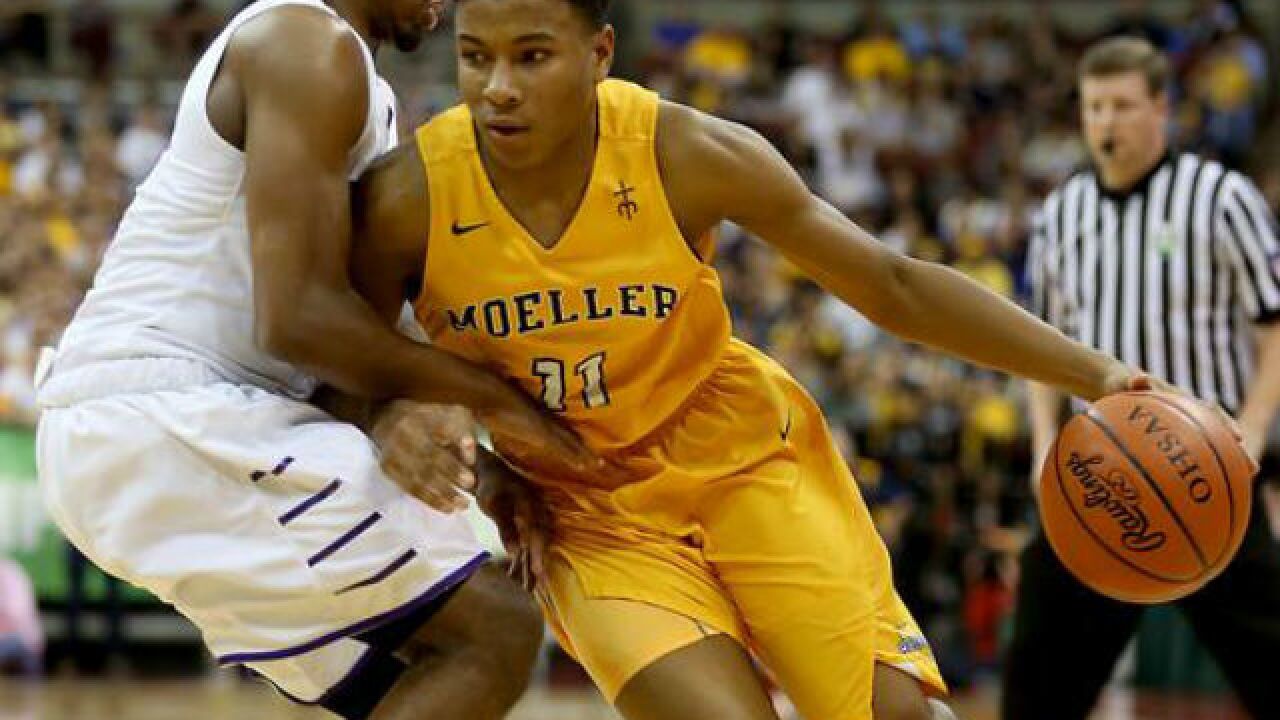 Copyright 2017 Scripps Media, Inc. All rights reserved. This material may not be published, broadcast, rewritten, or redistributed.
<p>Moeller junior guard Miles McBride will dress for the Crusaders for the first time all season tonight. He had been sidelined by an injury he suffered in late September during a football game against visiting St. Xavier. (File photo by E.L. Hubbard)</p>

“Miles has been able to practice this week and has performed well,” Moeller coach Carl Kremer told WCPO. “He’s fully cleared by the doctors. For us, we will just make game-time decisions as to whether he can play and how much he can play.”

McBride, who is verbally committed to the West Virginia basketball program, has been sidelined this entire season (28 games) as he continued to recover from a football injury. Moeller's starting quarterback suffered a mid-foot sprain injury on his left foot in the Moeller versus St. Xavier game Sept. 22, 2017 at Roettger Stadium in Lockland.

McBride, 6 feet 2 and 185 pounds, threw for 956 yards and 17 touchdowns and rushed for 136 yards and a touchdown in the first five games. That significant injury sidelined him for the final six football games and this entire basketball season until this weekend.

“He’s been off for a long time so he’s limited,” Kremer said. “He is not the 100 percent Miles McBride, but he is going to dress today and we’ll see how it goes in the game.”

McBride is expected to be a wing reserve tonight at an arena where he played his most recent basketball game nearly a year ago (March 25) in the 2017 state final.

McBride was named to the Associated Press Division I All-Tournament Team his sophomore season as the Crusaders (28-1 in 2016-17) finished as state basketball runners-up. He averaged 10.9 points, 3.4 rebounds, 2.3 assists and 1.7 steals last season.

“I think our team is excited and I know he is excited,” Kremer said. “Clearly this team has accomplished a lot with Miles being hurt. This team is confident. But, I think Miles – because of his leadership and the unique kind of kid that he is – I think it gives us a boost. But, in the end it’s about going in and playing.”

Earlier this season, Kremer did not expect McBride would ever dress for a game this year. Kremer said he received word from the doctors about two weeks ago that McBride could possibly play the final weekend of the season.

“I thought all year long from what I talked with doctors that there was a zero percent chance that he would play for us,” Kremer said.

On March 17, the Moeller coaching staff was informed of McBride’s excellent status.

“They told us that things were far beyond what they expected and they felt very good about it,” Kremer said. “So he started to practice on a limited basis Monday (March 19) and has performed very well.”

At the time of his verbal commitment McBride was taking shots with the Moeller team on the court. His father, Walt McBride, said Miles was scheduled to start to run on the court in March.

Kremer said is very encouraged that Miles McBride is able to have an opportunity this weekend.

“We are glad to have (Miles) back,” Kremer said. “He is certainly part of our family and it’s neat we’ll have him this final weekend no matter how much he contributes on the floor.”

Moeller, winner of 18 consecutive games, is making its seventh state tournament appearance this weekend. This is the second straight state final.