Hashtag 'I do': Internet-ordained ministers increase in Cincinnati 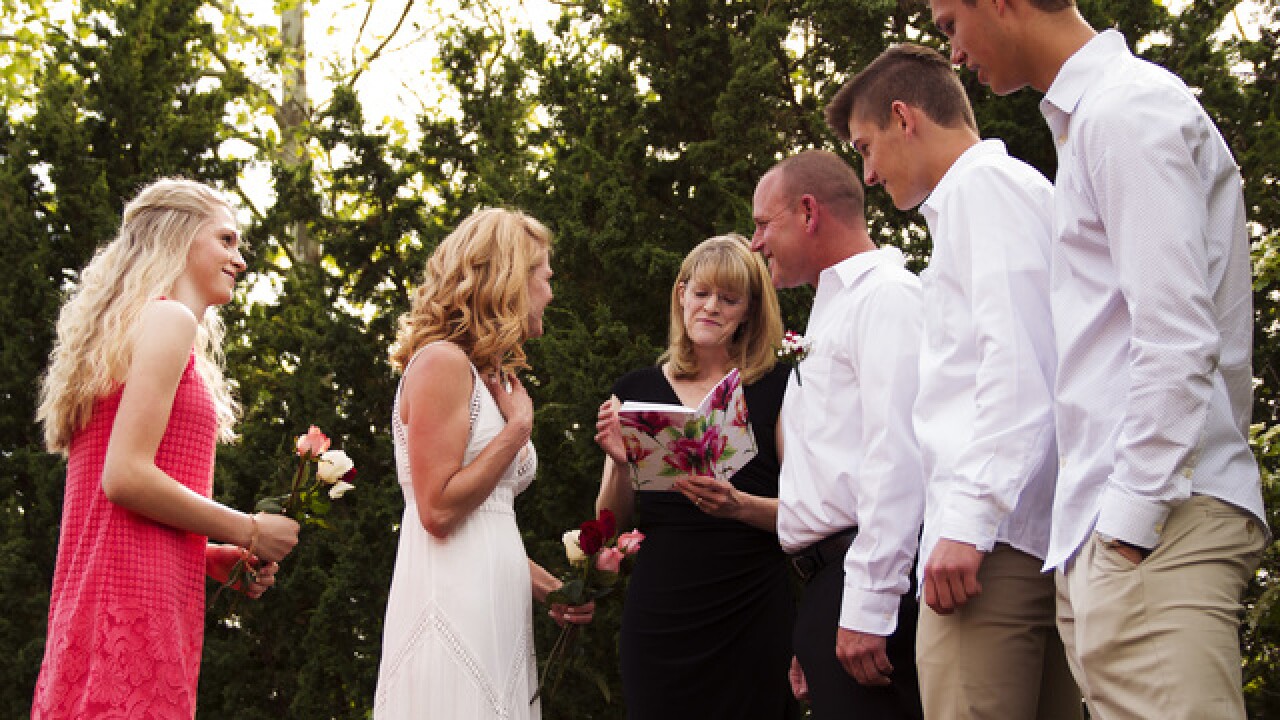 Copyright 2018 Scripps Media, Inc. All rights reserved. This material may not be published, broadcast, rewritten, or redistributed.
Hank Crenshaw
<p>Wendy Adams performs the wedding ceremony for her sister, Jenny Paffe Shapiro, in the spring of 2017.</p>

CINCINNATI -- When Jenny Paffe became Jenny Paffe Shapiro in the spring of 2017, she didn’t hire a minister to perform the ceremony. She asked her sister, West Price Hill resident Wendy Adams, to do the job.

Adams was not a minister and didn’t have a license to perform marriages in Ohio. She’s the director of IT at a Cincinnati branding company. But via the internet, within a matter of minutes, she became ordained as a minister with the Universal Life Church, based in Sacramento, California.

She is one of hundreds of locals who have obtained minister’s credentials online from churches that specialize in this kind of thing. It seems to be a trend, especially among millennials, who tend not to belong to a church or have a pastor they feel close to.

The ordination was free, but Adams purchased from the church a basic set of credentials. It cost $10 to get a license from the state of Ohio, making the total cost of her ordination less than $30.

“I was shocked at how easy it was,” she said.

Once she had her credentials, she used the “vow generator” on the church’s website to print out a sample set of wedding vows. After her sister modified them, she pasted them into a pretty book for the ceremony.

She wore a plain black dress for the ceremony, which took place in her sister’s backyard during an afternoon barbecue. Most of her family members didn’t know she was officiating until just before she began.

“It was very nerve-wracking to do it, even though it was family,” she said.

She has no plans to market herself as a wedding officiant, she said, but would do it again if a good friend asked her.

In Ohio, the secretary of state’s office issues licenses to people who want to perform marriages. All that’s required is the fee and a copy of credentials with a religious society or organization, said Press Secretary Sam Rossi.

The office doesn’t determine what constitutes a legitimate religious society or organization, he said. He also didn’t know of any organizations that call themselves a church that the office wouldn’t recognize as such.

Universal Life Church bills itself as the world’s largest online religious organization. Its website boasts of several celebrities who have become ministers in the church, including Conan O’Brien, Paul McCartney and Lady Gaga. The church has just two creeds: do what’s right and respect the religious freedom of others.

Charlie Kay, the church’s administrator, said that in 2017 the church was on track to ordain nearly 400,000 people, which would be a nearly 15 percent increase over 2016. He expected that about 20,000 of them would be Ohio residents.

That’s exciting, he said, because Ohio has been one of the more difficult states for Universal Life ministers to operate in, because unlike most states, it issues licenses to perform marriages at the state rather than the county level.

The increase in ordinations in 2017 is consistent with increases over the past five years, he said.

Much of that growth has come from young people who don’t have a church home, he said. If they haven’t had regular interaction with a pastor, they might not see the appeal of hiring the pastor versus having someone they know and love do the job, he added.

Another source of growth has come from gay and lesbian couples, who may now legally marry but might have trouble finding clergy willing to perform the ceremony. In the days after the Supreme Court decision in June 2015 that legalized same-sex marriage, the church ordained 15,000 new ministers, Kay said.

Most people get ordained to perform ceremonies for loved ones, he said, but others actually become ministers at bricks-and-mortar churches.

“We often heard nowadays that we are living in ‘Generation DIY,’ where people are striving to solve their own problems and answer their own questions, and that DIY spirit indeed seems to be stretching as far as religion and marriage,” Kay said.

In 2015, there were about 225,000 ministers ordained by Seattle, Wash.-based American Marriage Ministries, and now there are about 500,000, said Outreach and Operations Manager Brittany Tipton.

Aside from people getting ordained to marry loved ones, her church also sees wedding professionals such as photographers, caterers and wedding venue owners get ordained. They do this in case a professional officiant has to cancel at the last minute or can’t make the ceremony because of inclement weather.

How does American Marriage Ministries try to differentiate itself from other online ordination churches? By staying active in various communities, doing such things as sponsoring events for the LGBTQ community, Tipton said.

“We don’t just want to be an ordination mill. … We want people to understand how important what we’re doing is,” she added.