And check out the bathroom for a chuckle 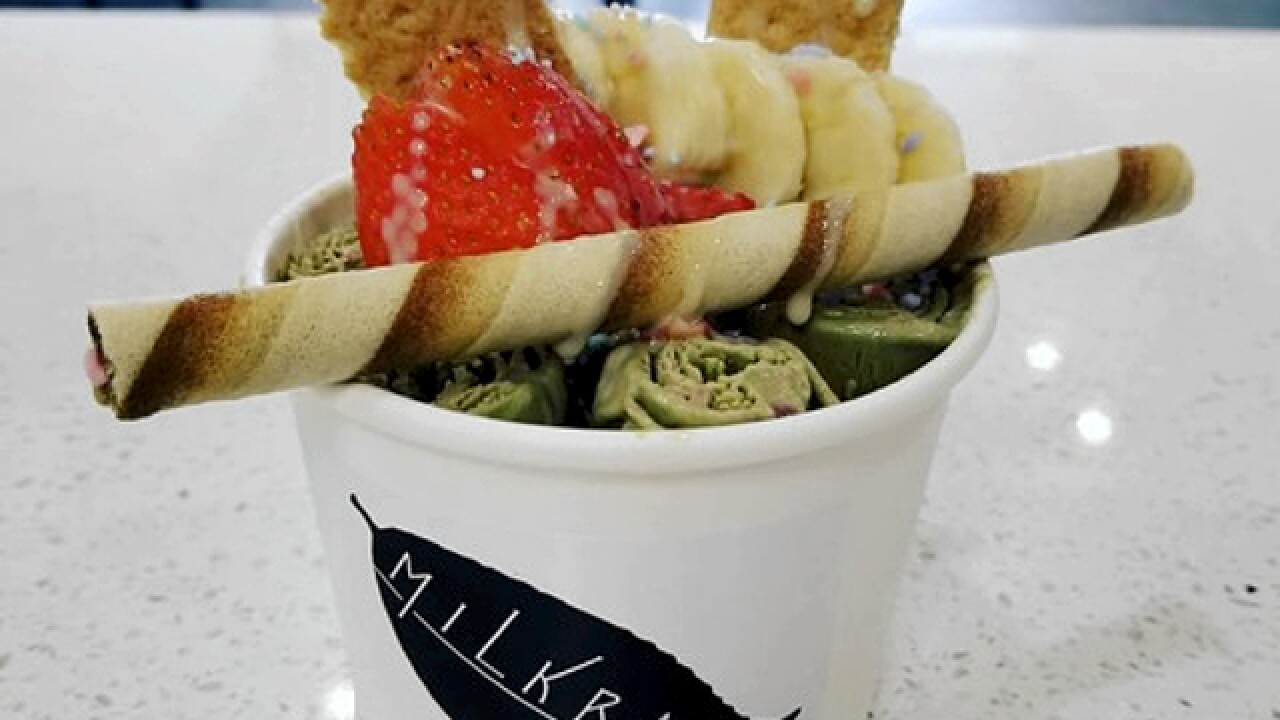 CINCINNATI -- Food should be an experience. For the newly opened Milk Bar Cafe, consider it mission accomplished.

The business, which debuted in September in Hyde Park Plaza, is a trifecta of fun.

Not only does it serve the "only" authentic bubble tea in the city, its owners said, it also boasts Thai-rolled ice cream and -- for kicks -- a cereal bar with offerings like the Choco Loco, which includes Reese's Puffs, Cookie Crisp, M&M's and chocolate chips, and Cinnamon Apple Pie, which includes Apple Jacks, Cinnamon Toast Crunch and graham crackers with a caramel drizzle.

Partners Kevin Chen and Jimmy Lin, who previously worked for a coal mine supplier in Louisville, grew up drinking bubble, or boba, tea, which partly inspired their new venture. But they said all three concepts are trending in their own right. Cereal bars, for example, are now common in New York, where Lin used to live, so it made sense to bring them together for a one-stop shop.

"I've heard people say that (Cincinnati) always gets everything last. But you don't see this concept anywhere," Lin said. "We think the market's here. People come in just off curiosity.

"We wanted to do something really authentic," he added. "Our tea tastes like something you'd find in Asian countries like China or Taiwan. We're all about fresh, real, natural ingredients. And presentation. A lot of places use powder (for their teas) and it just doesn't taste as good. People tend to think, at least psychologically, that if food looks pretty, it tastes better, too."

The menu may overwhelm at first, but there are certainly highlights. The strawberry uji matcha milk tea is a best seller, Lin said. Cereals include make-your-own options in addition to the combinations listed above. Since everything's made fresh, the sky's the limit for ice cream, too. Lin said they use a high-quality heavy cream base. Current flavors include Monkey Business, with banana and nutella; Unicorn Poop, with Fruity Pebbles and caramel; or Let's Date, strawberry and banana with vanilla or matcha. There are also 40-plus toppings from which to choose -- all unlimited -- including cereals and candy, cookies, nuts and fruit.

"We want to make it fun," Chen said. "We want you to play with your food. For our customers, we want to let their creativity flow."

As for the tea, Milk Bar's milk cap shines. Milk cap teas are served with a cream cheese-like topping, which is sweet with a hint of salt.

It "sounds weird," Chen admitted, "but people who try it tend to love it. It's really unique and something everybody tastes a little bit differently."

Milk Bar serves drinks in reusable cups in an effort to be more green.

The cafe debuted quietly, but Chen and Lin have seen a steady stream of customers. If the cafe can weather the winter months, Lin said, they'll look to expand the concept -- and open more Milk Bars -- starting early next year.

"That's our goal," he said. "This is our test trial right now. So far people like the product. Quality makes a difference."

Of note: Partners Kevin Chen and Jimmy Lin have received rave reviews thus far, but their bathroom signage is getting some love, too. Check it out for a chuckle.