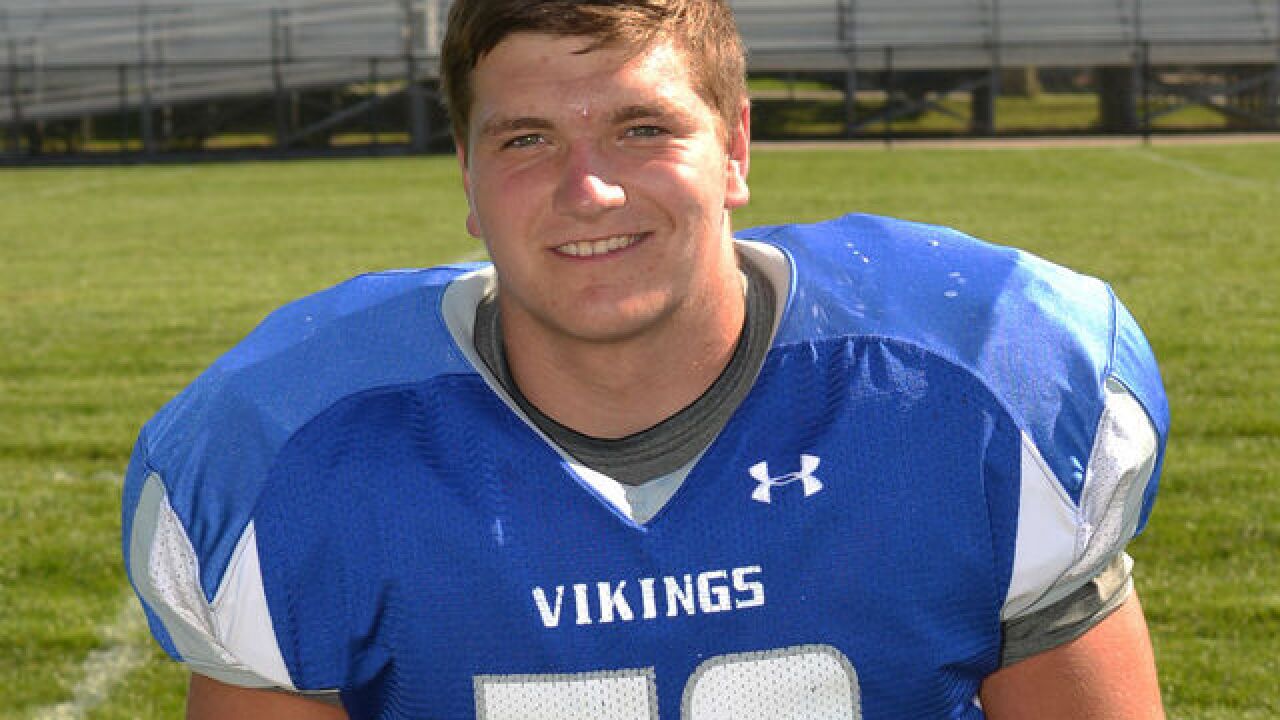 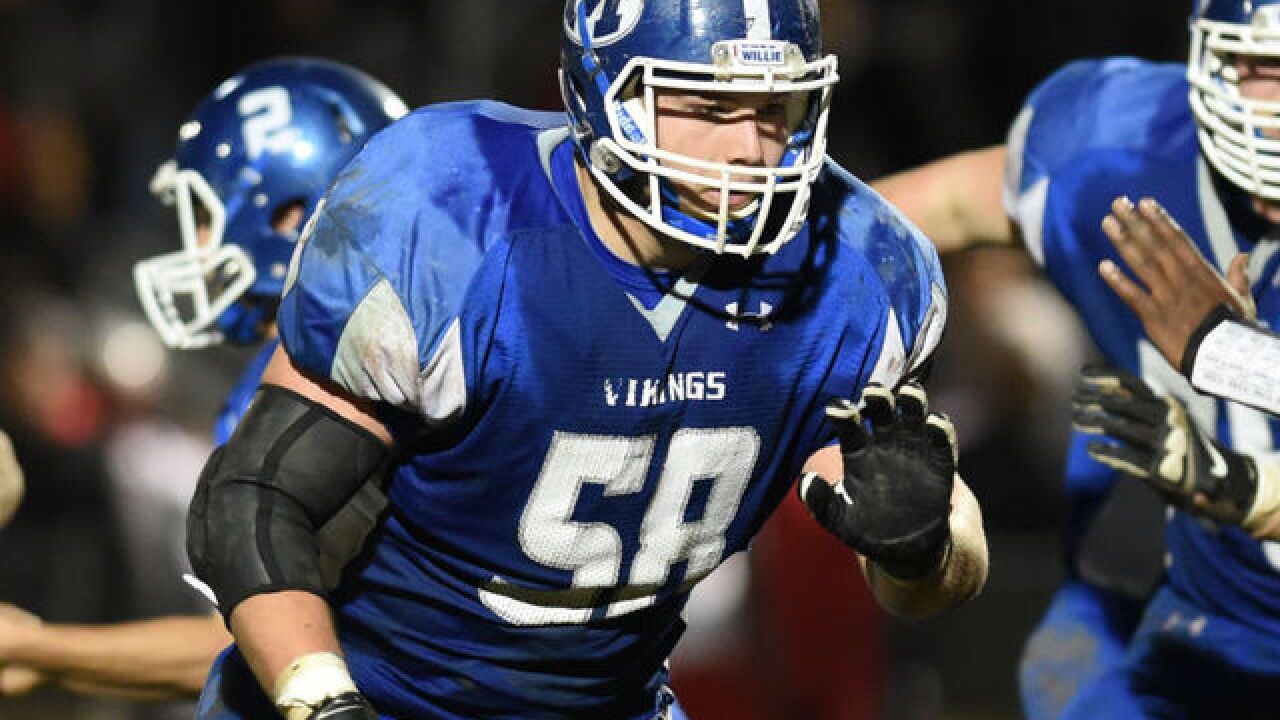 MIAMISBURG, Ohio – When Josh Myers walks into the Penn Station restaurant behind Dayton Mall, his order is fairly predictable.

The only lunch question for the Miamisburg 6-foot-6, 310-pound senior offensive lineman is whether he’s in the mood for one or two foot-long chicken teriyaki subs (with mushrooms and mayo).

If he gets fries, then the purchase is a footlong and a six-inch sub.

“For the two footlongs, it is $19.93 I think,” Myers said. “I am hands-down their best customer at Penn Station. People at the grill literally look at me and say ‘one or two (subs)?’”

The Ohio State commit will keep eating — figuratively and literally.

Myers is the state’s No. 1 football player in the 2017 class, according to 247 Sports and the nation’s No. 3 offensive tackle. Those calories serve him well.

Myers, 18, has been verbally committed to Ohio State since he made the pledge at a Buckeyes’ home men's basketball game in January 2015.

Myers, who attended the Nike Opening in Oregon this month, has a smartphone adorned with Buckeye stickers and calls Urban Meyer each week just to check in. The massive lineman will attend some games in Columbus this season and he’s envisioned himself playing at Ohio Stadium “thousands” of times.

He committed early to the Buckeyes because he didn’t want his recruiting to become a distraction later in high school and he wanted the Ohio State coaching staff to use their time to find other blue chip players like himself. Josh's brother, Zach, is a senior offensive lineman at Kentucky.

There was never a doubt about the Scarlet and Gray for Josh.

“I think that was a very smart decision because he’s a mature young man who thinks things through,” Miamisburg coach Steve Channell said. “And it became clear to him early in the process that Ohio State is where he wanted to go.”

Myers will graduate early from Miamisburg in December and move to Columbus in early January after he plays in the U.S. Army All-American Bowl in San Antonio.

Effect on the Community

But, those events can wait. Everywhere Myers goes around the Miamisburg community he’s recognized.

Fans want to ask about the Buckeyes and snap a photo with the standout. Myers benched 435 pounds this spring in a moment that was captured on social media. He also did a nifty one-handed clean  and press.

“It’s kind of like the (Duke basketball player) Luke Kennard effect and what he had on the Franklin community — smaller school but the same concept,” said Channell.

“Luke had so much notoriety because there were so many basketball games you could watch and he was the primary player of the game. You watch him shoot and dribble the ball. Josh, as an offensive lineman, never touches the ball but as far as the impact he has on our program and our community it’s the same.”

The Vikings enter this fall with three consecutive playoff seasons, going 24-9 during that span. They will be talented again and the offensive line also has Cody Lamb (University of Cincinnati commit) among the 28 seniors. Myers can't wait for Friday nights, but he wants to take his time, too.

“It’s unreal how fast my high school career has gone by,” Myers said. “I’m just looking forward to playing with my buddies that I grew up with. I will never get to do it again. I’m really excited to do it one last season.”

Despite the recognition, Myers treats all his teammates the same, said Miamisburg Athletic Director Jason Osborne.

“He’s one of those guys who has the ‘it’ factor,” Osborne said. “He’s the whole package.”

Indiana was the first to offer Myers when he was a 15-year-old freshman. Alabama extended an offer during a trip between his freshman and sophomore seasons.

But, the attention didn’t change Myers, according to those who know him. He enjoys fishing and being one of the guys. He likes helping younger student-athletes with football camps in the district.

Said Channell: “He doesn’t put himself into positions to seek that attention.”

Star of the New Stadium

The spotlight will shine brightly on where Myers plays his home games this season.

There is plenty of anticipation for a new 5,000-seat football stadium being constructed on campus. Holland Field is scheduled to open Sept. 2 when the Vikings host Chaminade Julienne (7 p.m. kickoff).

Myers, 18, walked around the pristine field on a late July morning and couldn’t wait to play there on Friday nights this fall. He playfully dunked a set of Channell’s keys over the crossbar.

“It’s been unreal,” Myers said. “I love playing for this community. They have supported us all the way through. It’s been a pleasure for sure.”

Mark Porter, director of ScoutingOhio.com, said Myers has been physically imposing since his freshman season and has major upside when he enters Columbus.

“He has great toughness and desire,” Porter said. “A road grader in the run game, light-footed in pass protection.”

Miamisburg utilizes the Wing-T, so the run game is where Myers really dominates. Channell has yelled to the officiating crew to watch defenders diving at Myers’ legs on the line of scrimmage.

Unfortunately, it’s become a common occurrence and one that Myers anticipates. He is frustrated when it occurs but works to combat that situation when he can with his intimidating size and talent.

“There are a couple of things you can do," Myers said. "I just pretty much just lay on them. I just jump right on top of them. Literally there is nothing else you can do. You are in mid-stride and they are trying to take your legs. You do what you can so they don't do it again."

One play Myers would like to do this season is to be the ball carrier and he would love nothing more than to score a touchdown. He’s yet to have a carry in high school.

Channell is not giving any guarantees that will happen for the best player he’s ever coached in 25 years. A run play for Myers isn’t in the playbook – yet.

“That’s in the appendix,” Channell joked.