Mercantile Library has a stimulating lineup of speakers and programs this year -- plus yoga, too! 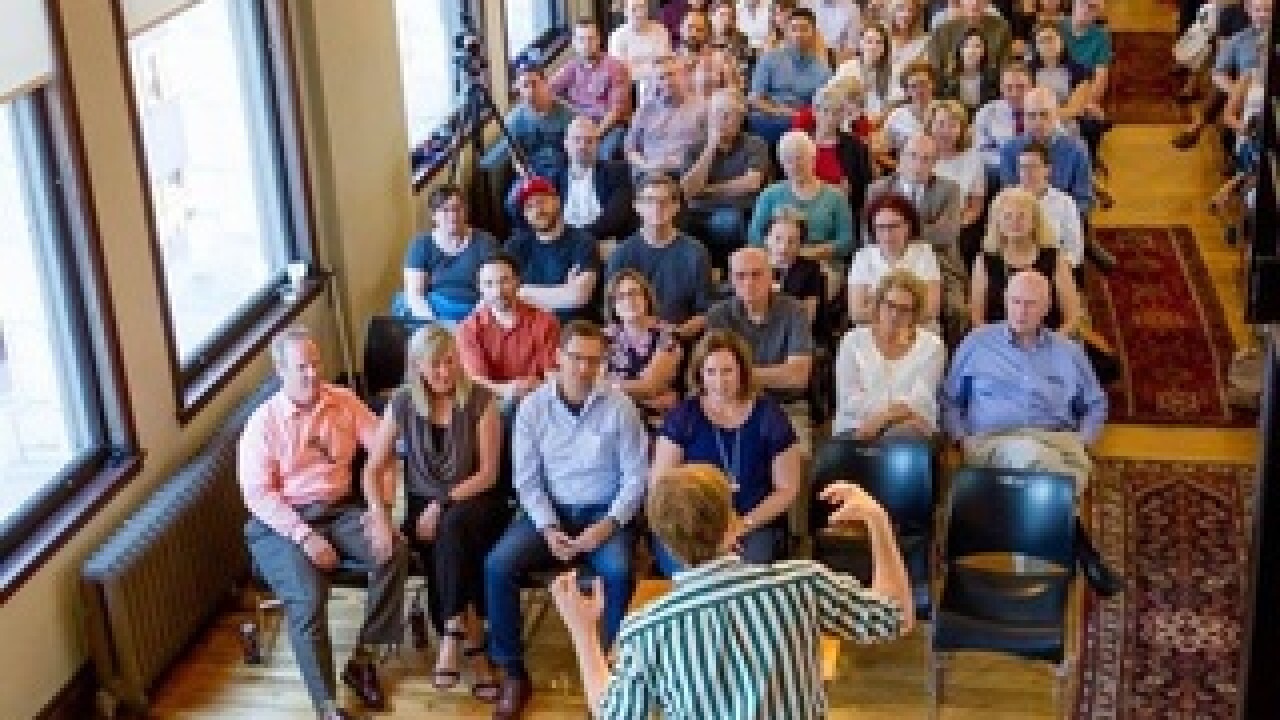 Copyright 2018 Scripps Media, Inc. All rights reserved. This material may not be published, broadcast, rewritten, or redistributed.
Provided
<p>Chuck Klosterman, a columnist and best-selling author, speaks at a Signature Event at the Mercantile Library on Aug. 8, 2017</p> 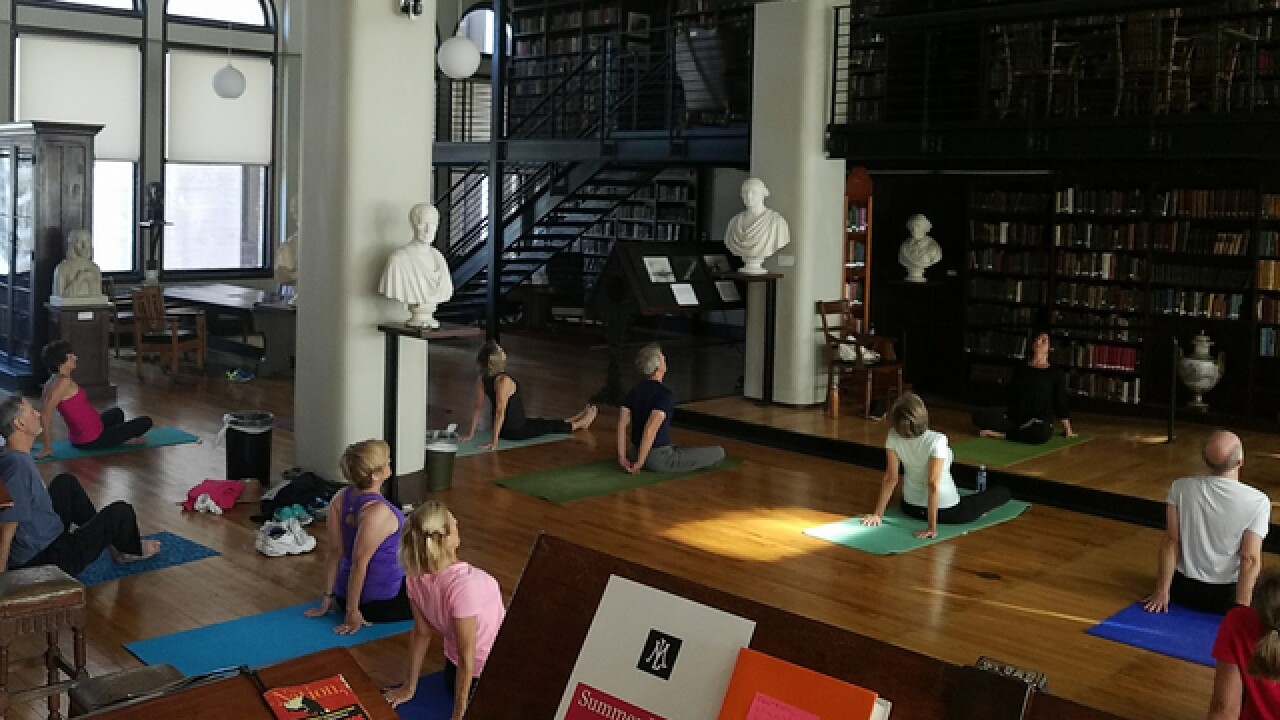 CINCINNATI -- Founded back in 1835 by merchants who came together to pursue self-education and networking, the Mercantile Library in downtown Cincinnati is one of just two dozen or so remaining membership libraries in the country.

Aesthetically, the local landmark looks exactly the way you'd expect a nearly 200-year-old library to look: Its polished hardwood flooring and leather furnishings, original reading desks with ornamental iron framework and worn mahogany tops, and towering bookcases create an opulent but comfortable escape from the hustle and bustle of the city. It even smells like old books.

But in much the way you can't judge a book by its cover, you shouldn't judge the Mercantile Library solely on its fancy digs.

"We're not pretentious," said Amy Hunter, the library's literary programs and marketing manager, who is one of only five full-time staff members.  "We're actually very accessible and incredibly welcoming."

In fact, yoga mats are scattered across that aforementioned hardwood floor two mornings a week, and visitors can be seen having lunch while reading or working on their laptops in the library most days.

"We have spent the past few years trying to tell people about this library … and tried to make sure everybody knows this place is smart but not stodgy," said executive director John Faherty.

Their efforts appear to be working. The library welcomed about 7,000 people last year for more than 100 programs and events. That number is up 70 percent since 2015, he said. And membership is higher today than it has been in 100 years -- and much more diverse.

Aside from its beautiful space on Walnut Street and ever-expanding book collection, one of the biggest draws for library members -- who pay a membership fee  that starts at $55 per year -- and visitors alike is an expansive schedule of programming and events throughout the year, including author and writer visits and lectures, book discussions, workshops and community forums.

The library hosts numerous authors, writers, journalists, artists and social activists each year with its Signature Events series. The series of lectures are annual, themed events that tackle a wide range of topics, including politics, art, literature, science and religion.

"The 45 young men who founded the library were really progressive thinkers in a lot of ways," said Hunter. "They wanted to have the best and brightest writers and thinkers here to speak. That's what we've been doing since 1835."

Because the library is funded through membership, it has the funds to pay for big-name authors to help support that mission.

"That's the best part about being a membership library," said Faherty. "Our members are the library. If they're looking for a book, we can order it. If they have ideas on who they would like to speak, we try to make that happen."

The library has an events committee that selects authors for its literary programs and lecturers for the Signature Events series. It's made up of staff, library members and members of its board of directors.

It's an exciting process for the group of "voracious readers," according to Hunter.

"We're always striving for bigger, better and more," she said.

After all, visiting authors and lecturers have some big shoes to fill. The list of past lecturers at the Mercantile Library includes the likes of Ralph Waldo Emerson, Herman Melville, Harriet Beecher Stowe and Julia Child.

This year, for its Signature Events series, the library will host Molly Wellmann, local mixologist, entrepreneur and author of "Cincinnati through the Whiskey Glass," on January 16; singer-songwriter and novelist Steve Earle on March 14; journalist and author Susan Orlean on April 19; New York Times columnist and cookbook author Melissa Clark on May 10; and Pulitzer Prize-winning author of "The Underground Railroad," Colson Whitehead, on June 13.

The library series will also host Liza Mundy, author of "Code Girls: The Untold Story of the American Women Code Breakers of World War II," in July; Jerald Cooper, co-founder of "The Era of the Engineer," on Aug. 23; Luc Sante, critic and author of "Low Life: Lures and Snares of Old New York" and "The Other Paris," on Sept. 13; and Jennifer Egan, Pulitzer Prize-winning author of "A Visit From the Goon Squad" and "Manhattan Beach," on Oct. 17.

Signature events are free for members. Some are open to non-members, but a fee is required to attend. For details about any of the upcoming events, visit the library's website .

The Niehoff Lecture, the library's big, annual black-tie fundraiser at the Hyatt Regency, will be held on Nov. 3 this year. It will feature Margaret Atwood in conversation with Curtis Sittenfeld. The cost is $175 for members and $200 for non-members.

Atwood is an award-winning author and has written more than 40 books of fiction, poetry and critical essays. Her novel "The Handmaid's Tale" has been adapted into an ongoing Hulu series. Her novel "Alias Grace" is a six-episode Netflix mini-series. Her "MaddAddam" trilogy is currently being adapted for HBO.

Sittenfeld is a Cincinnati native and best-selling author of five novels. Her books have been selected for various publications' "Ten Best Books of the Year" lists and optioned for television and film.

Literary programs at the library this year will feature some big-name authors, as well, including Brit Bennett, "The Mothers"; Joshua Rubenstein, "The Last Days of Stalin"; John Darnielle, "Universal Harvester;" and Min Jin Lee, "Pachinko."

The library has a "remarkable year ahead," Faherty said. And though he admits membership libraries are no longer the norm these days, he says it's actually a great time to be part of one.

"I think we live in what can be called weird times," he said. I" am not sure if that is the proper sociological term, but things feel crazy. This library is not crazy. It is challenging, it is lovely, it is for thought and discourse. But it makes sense."