Meet the Andersons, a family of repute with local roots that shaped the course of U.S. history 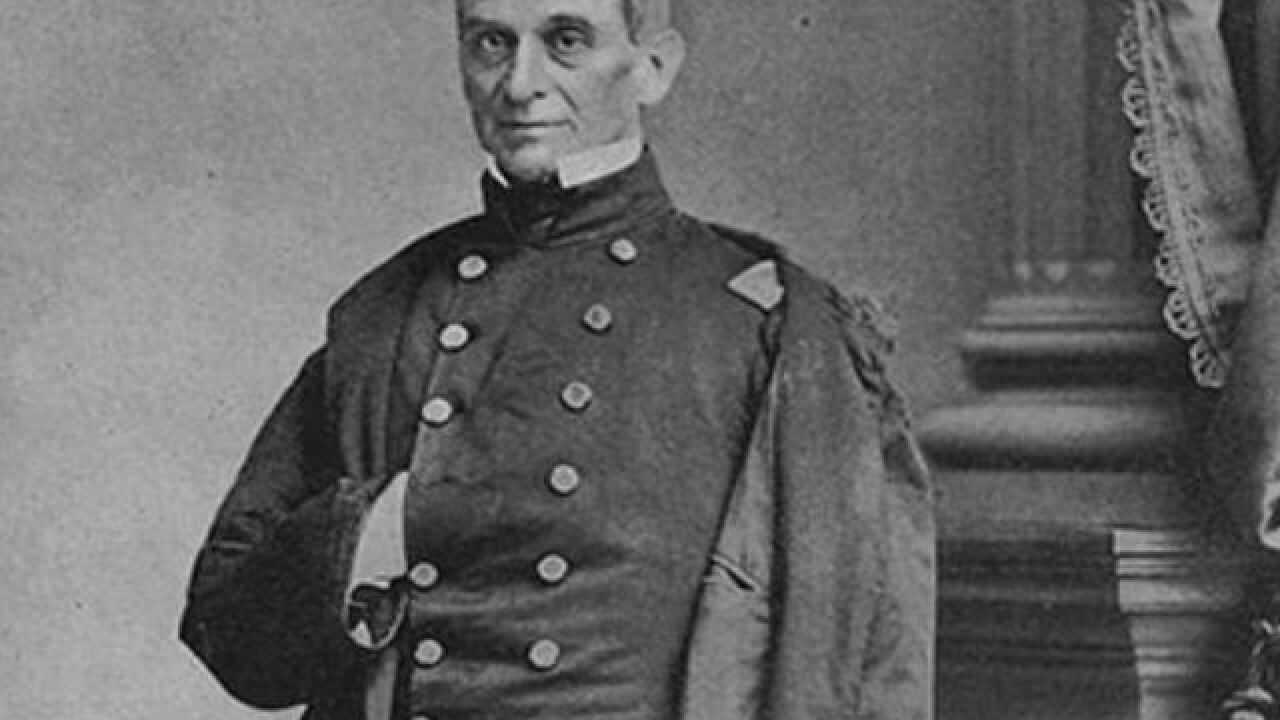 CINCINNATI -- It’s hard to believe they’re all in the family.

The Andersons, that is. They of the township on Cincinnati’s East Side.

The scope of this one family’s impact on the history of our region and country over a four-generation period not only is embedded in their name, but in the names of those famous figures — both national and local — with whom they served and shared family ties.

Among the local legends in the Andersons’ inner circle was Cincinnati’s first millionaire and father of the American wine industry Nicholas Longworth. Forty-five of the 72 people buried at the Longworth plot at Spring Grove Cemetery and Arboretum are Andersons. By comparison, only nine are Longworths.

Standing out among the family’s many noteworthy members are a father, four sons, a grandson and two great-great-granddaughters.

Richard Clough Anderson Sr.: The family patriarch (1750-1826) was a Virginian, a lawyer, a politician and surveyor general of Virginia military lands, which included the area that borders the Ohio and Little Miami rivers. A township formed there in March 1793 and was named for Anderson. It is unknown but doubtful he lived or ever visited there. Anderson’s middle name was given to a prominent creek running through Anderson Township. As a Continental Army captain, he crossed the Delaware River on the first boat with Gen. George Washington en route to the pivotal Revolutionary War battle in Trenton, New Jersey, during which he was wounded. He served as Lafayette’s aide-de-camp as well.

Anderson had 14 children with two wives, the first of whom was the niece of the famous Clarks, and the second of whom was a cousin of Marshall. Anderson settled at his “Soldier’s Retreat” plantation outside of Louisville in 1784. He was a charter member of the Revolutionary War veterans group the Society of the Cincinnati , which inspired Gen. Arthur St. Clair, also a society member, to replace Cincinnati’s original name, Losantiville, after just one year.

Richard Clough Anderson Jr.: The first born of those 14 children, Anderson Jr. (1788-1826), was a graduate of William and Mary College in Williamsburg, Virginia, and a powerful speaker. He served one term in Congress (1817-21) as well as three in the Kentucky Senate. President Adams appointed him to the be the first United States Ambassador to Columbia, and he was succeeded upon his death by future president William Henry Harrison. Anderson County, Kentucky, bears his name.

Gen. Robert Anderson: It’s possible that no other Anderson had more impact on our country than Anderson Jr.’s younger brother, Robert (1805-1871). The West Point graduate and career officer mustered Lincoln in and out of the Army in 1832. He led the defense of the first battle of the Civil War at Fort Sumter in Charleston, South Carolina, in April 1861. Although he surrendered, Robert rescued the fort’s 33-star Union flag. Less than a week later, Anderson unveiled that same flag before an estimated crowd of 100,000 patriots at a New York rally, which was the largest gathering of people in North America up to that date. Since then, Old Glory, once the symbol of the Army, has been the symbol of all the American people. The flag returned to its position on Fort Sumter’s pole at war’s end a few hours before John Wilkes Booth assassinated Lincoln on April 14, 1865.

Anderson lived with his brother Larz in Cincinnati while he organized the first regional Civil War training station at Camp Dennison. After that, he commanded Union troops in Kentucky for six months before being replaced by Sherman.

Larz Anderson: (1803-1878) The first of four Larz Andersons buried at Spring Grove is the link to the Longworth family. The Cincinnati businessman and overall mover and shaker married Nicholas and Susannah Longworth’s youngest child of their four, Catharine, had nine sons and three daughters, and lived in the Longworth’s Belmont mansion on Pike Street (now the Taft Museum of Art ) before building a house for his family next door.

Charles Anderson: Charles (1814-1895) graduated from Miami University and went on to become county prosecutor in Dayton and a state senator. Despite being born on a plantation with slaves, he was a vocal abolitionist as early as 1845. Charles practiced law in Cincinnati for about eight years before returning to Dayton in 1855. He took his anti-slavery beliefs with him when he moved in 1859 onto a farm near San Antonio, Texas, where he was imprisoned in 1861 for his pro-Union convictions. He made a daring escape to Mexico and returned to New York a national hero. Lincoln assigned Charles to represent him in England on a war fund drive in 1862, after which he was commissioned as a colonel to form the 93rd Ohio Volunteer Infantry in Dayton.

Most impressive, however, is the fact that Charles delivered the third — Lincoln’s was second — and last address following the Battle of Gettysburg. The original draft of that speech was discovered recently in Wyoming and became the basis of a book about Charles called “The Lost Gettysburg Address” by David T. Dixon. A wound Charles suffered at the Battle of Stones River, Kentucky, ended his service. Back in Ohio, he was elected lieutenant governor on the War Democrat ticket. Gov. John Brough died in August 1865 of gangrene contracted from a war wound, and Charles served out the last four-and-a-half months of his term as governor without fanfare. He did not seek re-election.

Larz Anderson II: There’s a little-known park overlooking the Ohio River from Golden Avenue in East Walnut Hills that is named for the Anderson family's second Larz (1845-1902). Larz II was one of 12 children born to Larz I and Catharine Longworth. He studied law at Harvard University and was a Cincinnati bank director who devoted time and money to the cultural and fine arts as well as Christ Church, the Fresh Air Society and Convalescent Home and the Hospital of the Protestant Episcopal Church, which is now Cincinnati Children's Hospital Medical Center . He built a country mansion on a large estate off Grandin Road, which today is the exclusive Hill & Hollow (the name of the Anderson mansion) subdivision of Hyde Park and Larz Anderson Park today. It was a gift from Larz’s wife, Emma Mendenhall.

One of the couple’s three children, George M. Anderson (1869-1916), was half of the famous Elzner & Anderson architectural firm that designed numerous grand homes in Cincinnati as well as the first reinforced concrete skyscraper in the world, the 16-story Ingalls Building, at Fourth and Race streets.

Annie W. and Elizabeth M. Anderson: The great-great grandfathers of Cincinnati Anderson sisters Annie (1917-2011) and Elizabeth (1912-1998) were Nicholas Longworth and Richard Clough Anderson Sr. The sisters created a nonprofit foundation that, among other things, contributed $1 million toward the renovation of Memorial Hall in Over-the-Rhine, whose theater will be named for them. Their names also grace a 350-seat conference pavilion underneath Carol Ann’s Carousel at Smale Riverfront Park .

Well-known in Washington, D.C., circles was Larz Anderson III (1866-1937), a decorated diplomat who was born in Cincinnnati to Larz II’s brother, Civil War Maj. Nicholas Longworth Anderson. Larz III willed his capital city mansion and his vast art collection to the Society of the Cincinnati, which uses it as its national headquarters. There is a second Larz Anderson Park in his former hometown of Boston.

The mother of mid-century actor Montgomery Clift, Ethel “Sunny” Fogg, claimed she was the illegitimate daughter of Woodbury Blair and Maria Latham Anderson (1849-1925). Maria, who went by “Bobbie,” was the second child of Fort Sumter hero Robert Anderson. The story is that Bobbie had a clandestine marriage or affair with Blair and became pregnant. Bobbie’s disapproving mother reportedly had her whisked away to Philadelphia to give birth and put the baby up for adoption, clouding any controversy that could have damaged the Anderson name. The truth of the story has been debated for years. No official records posted under Maria Latham “Bobbie” Anderson on Ancestry.com support Fogg’s story.