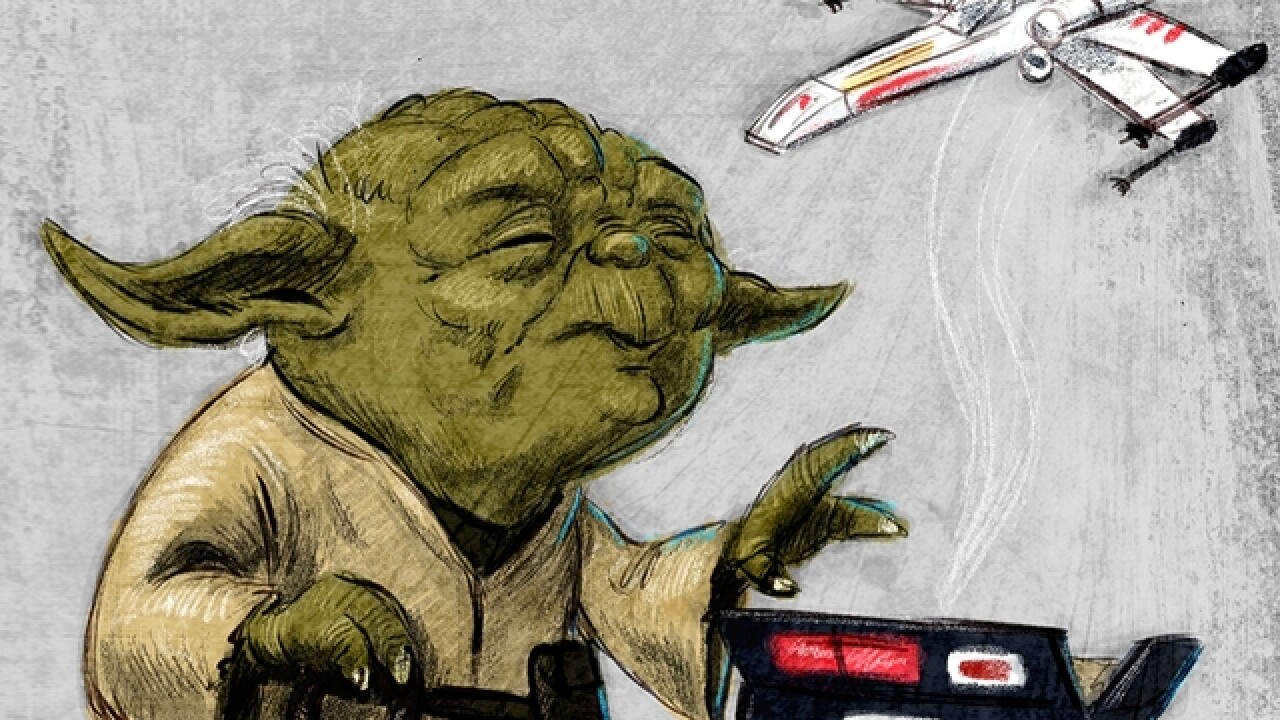 CINCINNATI — Queen City "Star Wars" fans will not have to travel to a galaxy far, far away to enjoy art inspired by the blockbuster movie franchise this Wednesday.

Local artists will display their "Star Wars"-inspired works on "Star Wars Day" during “May the Fourth Be With You," an art tribute show 6-10 p.m. at the Brew House in Walnut Hills. (Science fiction fans claimed May 4 as an unofficial holiday years ago as a play on "May the Force be with," a popular phrase introduced in the first "Star Wars" movie, “A New Hope,” which opened in theaters in 1977.)

WCPO editorial cartoonist Kevin Necessary, one of the artists participating in the show, said the imaginative world and artwork of "Star Wars" he was introduced to as a child sparked his passion for illustration.

“It wasn’t open to professional artists," Necessary said. “I mentioned that to my friend (Wald) and we decided to do our own art show.”

Wald described herself as an immediate "Star Wars" fan after seeing "A New Hope" when it first came out in theaters. As a child, she began sketching what she saw on the big screen and in the few fan magazines of the time.

"I think it’s hard to realize that back then there was not that much media," she said. "There was not a lot of science fiction. It was a major part of our play pattern as kids."

The artist remains impressed with the enduring nature of the franchise for subsequent generations; a fact reflected in the overwhelming response she and Necessary received from their call for artists a few months ago.

"I can’t think of so many pop cultural icons that have transfixed so many children's imaginations for so long," Wald said. "We have a very nice variety of art and artists."

Submissions included paintings, line art, a doll, a blaster and embroidery. Wald points out there are a fair amount of women represented in her and Necessary's science fiction and fan-based art show as well.

Northern Kentucky animator Allison Craig, for example, agreed to create and display some original work. Craig has worked on such shows as Comedy Central's "Moonbeam City" and Cartoon Network's "The Venture Bros."

"That’s one thing I’ve seen change," Wald said. "When I started there weren't that many women in it (fan culture and illustrations). It’s totally changed. The women are much more enthusiastic."

In the end, artists submitted more than 45 pieces to display for the "May the Fourth" tribute show.

There will also be a live artwork presentation at the event and auction of some of those pieces, Wald said.

"We may have some cos-players (costume players)," she said.

Remote-controlled droids will roam the Brew House for photo opportunities. A percentage of food, art auction and drink proceeds will be given to Star Wars: Force for Change, the nonprofit established by "Star Wars" creator George Lucas to “promote change through inspiration, stories and meaningful partnerships."

Those droids visited 9 On Your Side Wednesday morning. Watch in the video player below.

For more information on the "May the Fourth Be With You” art tribute show, visit the event page on Facebook.