Master of Madeira: New owners hope to lock in legacy for Romualdo, their favorite tailor

'His life could be a novel' 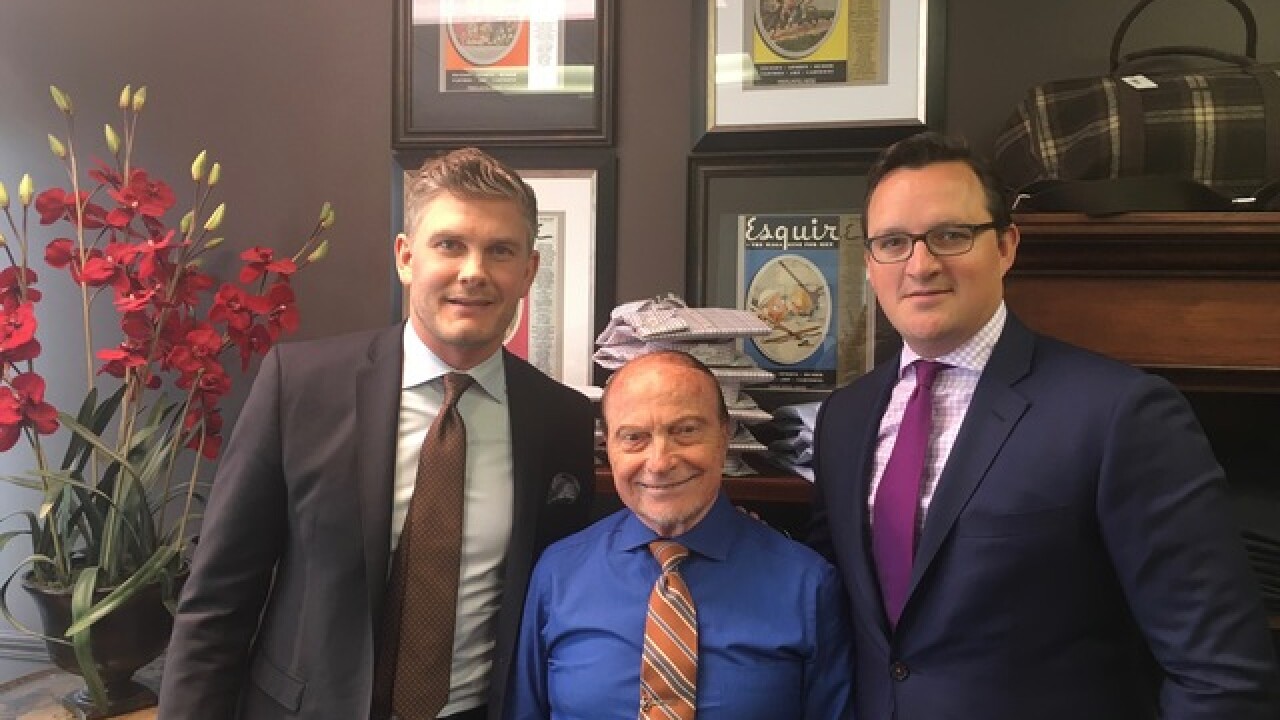 Copyright 2017 Scripps Media, Inc. All rights reserved. This material may not be published, broadcast, rewritten, or redistributed.
Dan Monk

MADEIRA, Ohio - Romualdo Pelle deftly separates seams from shoulders on a well-worn jacket that will consume half his workday. He’ll turn 83 in December, but he’s in no hurry to leave this little shop in Madeira where he became a favored tailor for Cincinnati’s rich and famous.

Those words are like nectar to the new owners. Tim Brock and Chris Berre fell in love with men’s fashion because of Romualdo. Both were customers who became part-time employees then abandoned other career options to help Pelle’s creation grow.

“He is extremely charismatic, a really fun guy to be around,” Brock said. “Some of the stories he tells are just amazing. I mean, his life could be a novel.”

It could also be a Black Friday lesson for the nation’s biggest retailers, beleaguered by online encroachment and surplus space. At a time when Macy’s Inc. and other retail giants are trying to deepen their customer relationships with cell phone apps and data analytics, Romualdo is selling $15,000 suits with talent, tradecraft and tales of the old country.

Those relationships start with Pelle, an Italian immigrant who next July will celebrate his 50th year in business at the same location, 7121 Miami Ave. But it’s not just Pelle’s presence that fuels the place. It’s the bourbon-stocked bar cart, the men’s club vibe, the casual conversations about family, friends and style.

“The reason I always come back is the experience,” said Alex Strohm, a Frost Brown Todd attorney who first visited Romualdo as a child. “I come in once a year and Tim remembers the last things I bought, what my sizes are. He knows that I wear a watch and he knows how big the watch is. He knows that when I get a shirt made that the left sleeve needs to be a quarter inch wider. That kind of encyclopedic knowledge makes me feel like I’m the only client that Romualdo has.”

Pelle grew up poor in Mussolini’s Italy. His homeless family lived in a cave during part of his childhood. His godfather steered Pelle into tailoring in his teens, explaining his body was too slight for hard labor. He came to the U.S. in 1960 and settled in Cincinnati because his wife’s grandfather lived here. After eight years working at the former Pogue’s department store, he struck out on his own in 1968, renting a small space in the rear of the building his store now fully occupies. Pelle said he worked 70 to 80 hour weeks and used a translation dictionary to gradually learn the English language.

One of his early adopters, Cintas Chairman Richard Farmer, took an interest in Pelle because he often noticed his shop lights on late at night.

“He stop by and say, ‘Romualdo, what you doin’ over there? You work at 2-3 clock in the morning.’ He admired the people with very hard work. He said you cannot succeed in any kind of business unless you work very hard,” Pelle said.

After Farmer came the Lindners: Carl, Robert and Richard, along with former Procter & Gamble Co. CEO Ed Artzt and astronaut Neil Armstrong. Pelle’s skill with the scissor and sewing machine made him popular with hard-to-fit Cincinnati Bengals.

“They keep to come," Romualdo said. "Repeat customers, you know what I mean? I never had any problem because they brought the family, the grandchildren, the children. So, everybody pitched in to make me better, a better businessman, I guess.”

The Wall Street Journal reported in 2008 that Pelle was part of a dying breed of “master tailors” left in the United States who were members of the Custom Tailors and Designers Association. The paper said about a dozen CTDA remembers were still at work, down from several hundred in the 1950s.

The association doesn’t currently list Pelle as a member on its website, but Brock said the store just recently renewed his membership. The association defines master tailors as members “with a lifetime of experience and skill as a bench tailor, who designs, cuts, and tailors a garment on his/her premises.”

Most of Romualdo’s customers buy suits that are custom-ordered based on measurements taken in the store. But Brock and Berre say there is no question Romualdo is a master, having apprenticed in Italy as a teenager and worked his entire life as a tailor.

“Sixty percent of our business is custom clothing,” Berre said. “That separates us from every store in the region.”

As Pelle approached the retirement age of 65, a customer offered to buy his business. Pelle remained as an employee of Horseshoe Clothing Company LLC, owned by husband and wife whose 2017 divorce led to a forced sale. Brock and Berre raised enough to satisfy unpaid vendors and bring the business back to solvency. Now, they're hoping to grow beyond the roughly $3 million in annual revenue that the store achieved before the ownership change. Romualdo continues to work about three days a week, mingling with customers, patiently doling out tricks of the trade.

“I still learn something new from him on a weekly basis,” Brock said. “I don’t sew, but I can fit, measure, pick just about anybody’s body apart and get it right to make a suit, sport coat, trousers.”

Romualdo spots a loose button on my off-the-rack sports coat and insists on making the repair.

“People think the button is no important,” he said. “Anybody could put the button (on) but it won’t last long. You have to do the trick.”

After using nylon thread to anchor the button in three places, Pelle promises it will last for the life of the jacket. Brock, beaming, confirms that it will.

“His legacy is important to us,” Brock said. “I hope we’re here another 50 years, doing the same type of quality tailoring and making the same quality suits.”