Masses in Latin, nuns in white habits draw parishioners from as far as Alaska to small Walton church

Our Lady of the Assumption eschews Vatican II 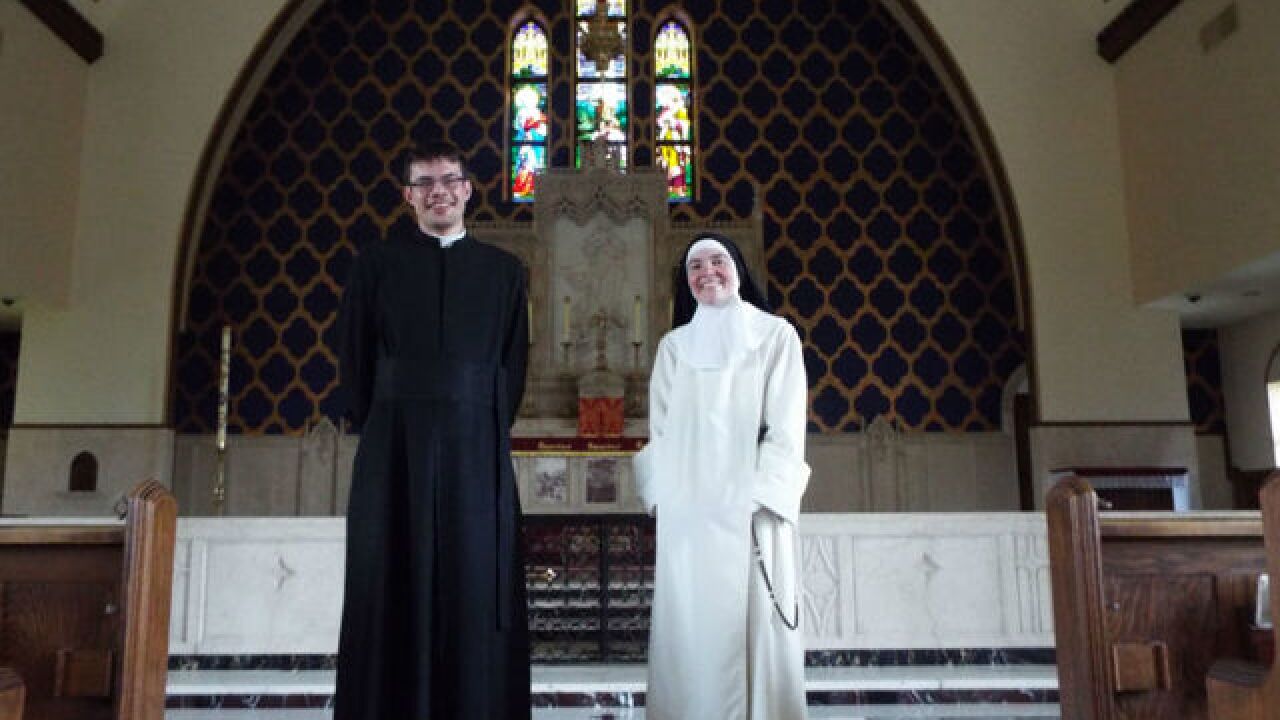 Copyright 2017 Scripps Media, Inc. All rights reserved. This material may not be published, broadcast, rewritten, or redistributed.
<p>The Rev. Daniel Muscha and Mother Mary Jordan pose before the altar at Our Lady of the Assumption Roman Catholic Church in Walton. (Photo by Kevin Eigelbach) </p>

WALTON, Ky. -- Adam Hand built a dream house for his wife and nine children on 40 acres in Palmer, Alaska, where he expected to live out his days.

But it turned out that the small Boone County town of Walton, Kentucky, had a bigger hold on him. The attraction was Our Lady of the Assumption Roman Catholic Church.

It’s a church like the one your grandparents went to – when they were kids. It’s staffed by priests from the Society of St. Pius X, a religious society founded in 1969 by the late Roman Catholic Bishop Marcel Lefebvre.

Members oppose the changes made to the Catholic Church after Vatican II, a worldwide conference held in the 1960s that Pope John XXIII called to “open the windows of the church so we can see out and the people can see in.”

After Vatican II, most Catholic churches began celebrating Mass in their local language rather than in Latin. But the priests at Our Lady of the Assumption celebrate mass in Latin, and they don’t follow other reforms instituted after Vatican II.

“Their formation has not been influenced negatively by the Vatican II council,” Hand said. “They have the most impressive discipline and knowledge and caring and formation, which sets them apart from other priests in the Roman Catholic church.”

Hand and his family left behind a house featured on the Discovery Channel show “Buying Alaska” and took a significant loss on the sale, he said, but it was worth it.

Hand said he could live anywhere in the world and still do his job as a pilot for Federal Express. But he said his son, Chet Hand, walked away from a well-paying job in Alaska to move to Walton after he did and join the church.

It only took a couple of visits and one attendance at Mass, Hand said.

The Hands are not the only families that have moved to Walton from other states to join the church, said the pastor, the Rev. Daniel Muscha. Some have moved from Oklahoma, Oregon and other states.

When Muscha arrived in 2013, the church had about 450 parishioners, and it now has about 650, he said. In terms of number of parishioners, it’s the largest traditional Catholic church in the Tri-State, Muscha said, and he’s proud of that.

There are at least two traditional Catholic churches on the Ohio side of the river: St. Gertrude the Great in West Chester and Immaculate Conception in Norwood.

Many Our Lady of the Assumption members are attracted by the church’s school, Assumption Academy, which offers children the opportunity to attend a Latin Mass every day. Students are given a Catholic liberal arts education, drawn from the great authors throughout history, designed to make them “good Catholic men and women,” Muscha said.

They are taught by lay teachers and by Muscha and the three other priests on the staff, as well as five nuns of the Dominican Teaching Sisters of the Holy Name of Jesus of Fanjeaux, France. That’s a traditional Catholic order whose members wear white habits that cover everything but their face and hands.

The school, which meets in classrooms in the church basement, opened in 2010 with about 30 students and now has an enrollment of 170.

This fall, Our Lady of the Sacred Heart Academy is scheduled to open in a building under construction across Beaver Road from the church. The plan is for boys and girls to learn there together through fifth grade, then have the girls finish middle and high school there, while the boys finish at Assumption Academy.

Plans are to build a chapel and convent for up to 20 nuns that would adjoin the girls’ school. Together, the school, chapel and complex are projected to cost about $8 million, Muscha said.

The church also plans to build a school just for older boys, probably sited just east of the church, when funds become available.

Tuition is cheap by private school standards -- $3,000 per year for high school students, $2,500 for grade school students. The church relies heavily on fund-raisers to support the school, such as its annual festival in September.

In its early days, the church was financed by charitable trusts controlled by members of the Brueggemann family, the owners of Bavarian Waste Services. One of those trusts also gave the church the land for its building site.

It was originally to be called Our Lady of Good Counsel, but the name was changed in honor of the church altar, a massive marble work brought to Walton piece-by-piece from the former Assumption Church on Gilbert Avenue in downtown Cincinnati.

The church, which seats about 410 people, cost about $6 million, Muscha said.

It lies less than a mile from All Saints Church, the other Catholic church in Walton. But All Saints is a part of the Diocese of Covington, while Our Lady of the Assumption is not.

Muscha hopes that one day traditional Catholics like him can be part of the church of Rome once again. In 2009, Pope Benedict XVI lifted the excommunication of four traditional Catholic bishops, which was seen as an important step toward full communion with the Society of St. Pius X.

“We hope one day we can get back together,” Muscha said. “But we’re going to keep fighting for the faith, and the tradition, which we have always done. We’re not trying to do our own thing, we’re just trying to do what the church has always done.”