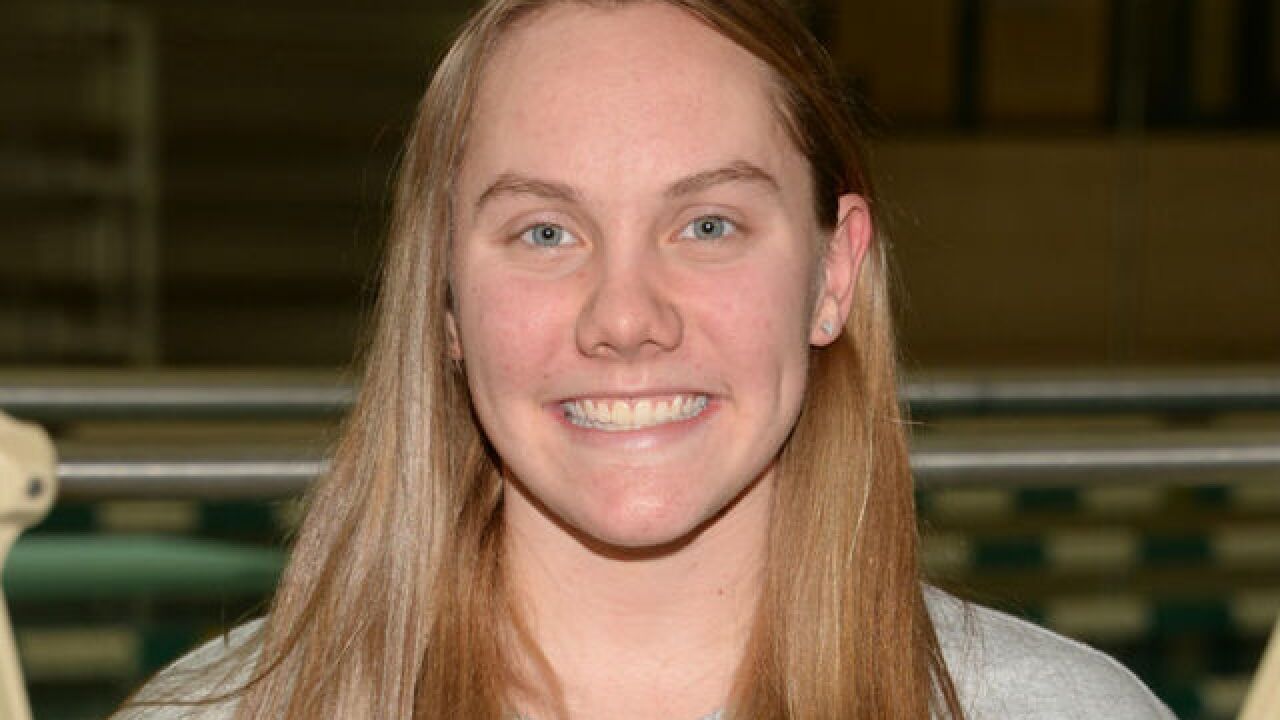 Copyright 2018 Scripps Media, Inc. All rights reserved. This material may not be published, broadcast, rewritten, or redistributed.
<p>Mason senior Allison Bloebaum signed with Missouri in November. (Submitted by Dan Hilen)</p>

MASON, Ohio -- The daily routine can be arduous for Mason senior Allison Bloebaum.

The Mason High School standout swimmer wakes up at 4:20 a.m. each weekday to attend practice. After a full load of classes, she participates in a three-hour afternoon practice before going home for a quick dinner.

“She is really a go-getter,” said her mother, Juli Bloebaum. “You never have to tell her to do homework or study.”

Allison -- a three-time state champion -- wouldn’t have it any other way. She has been swimming since the age of 7 and year-round since 8. Education and a desire to be self-driven was instilled by her parents, Jeff and Juli.

Allison doesn't settle. She has lofty goals in the pool and the classroom.

“I love swimming more than anything,” Bloebaum said.

The sport has been good to the 18-year-old who has signed with the University of Missouri. Last week, she was named the LaRosa’s MVP Featured Athlete.

Bloebaum helped the Mason girls’ team win the Southwest Ohio High School Swimming and Diving Classic last weekend. She was part of the 400 freestyle relay that set a new meet record in 3:29.05.

As a sophomore, she was on Mason’s state-winning 400-freestyle relay team -- earning the first girls’ swimming relay state title in school history.

On a national level, she was the 2017 National Interscholastic Swim Coaches Association (NISCA) Junior National champion in the 500 and 1,650 freestyle competitions.

“Swimming allows me to be me,” Bloebaum said. “It gives me a sense of self pride.”

There is a lot of pride within the Comets program this winter. “We want to win state,” Bloebaum said.

The Comets have been the Division I state runner-up the past two seasons to Upper Arlington. Mason defeated Upper Arlington in a meet in early January, but Comets coach Mark Sullivan knows better than to put too much stock into that result. But things are trending in the right direction.

Bloebaum also has an opportunity to continue to add to her legacy at Mason. Sullivan says she could add four additional titles this February.

While 2017 standout Ashley Volpenhein has moved on to Stanford, Bloebaum has emerged from her spotlight.

“She has really filled the void,” Sullivan said.

The 4.0 grade-point average doesn't happen by accident. She has her practice and study habits organized. A study hall near lunch each day is crucial before a three-hour practice from 4 to 7 p.m.

After a quick dinner, Bloebaum hits the books again at night before usually getting to bed at 8:30 p.m., enough time to get nearly eight hours of sleep.

“The amount of dedication these kids have year-round is amazing,” Sullivan said. “It’s impressive to see how they are able to maintain both (swimming and academics).”

Maintaining the balance requires a great deal of discipline and preparation.

“It is super hard sometimes,” Bloebaum said. Bloebaum’s strength is in math and has plans to pursue studies in elementary education at Missouri -- a program she signed with in November after giving a verbal commitment last July.

Bloebaum takes a Futures Teachers of America Program at Mason where she has been able to shadow and volunteer educators at various elementary schools. She enjoys working with first graders when the opportunity presents itself.

Grading Bloebaum’s efforts as a student-athlete is simple. She can also be counted upon in the clutch during meets.

“She is a real gamer,” Sullivan said. “She is the type of person who you want to have the ball in the fourth quarter. She does not back away from the competition.”