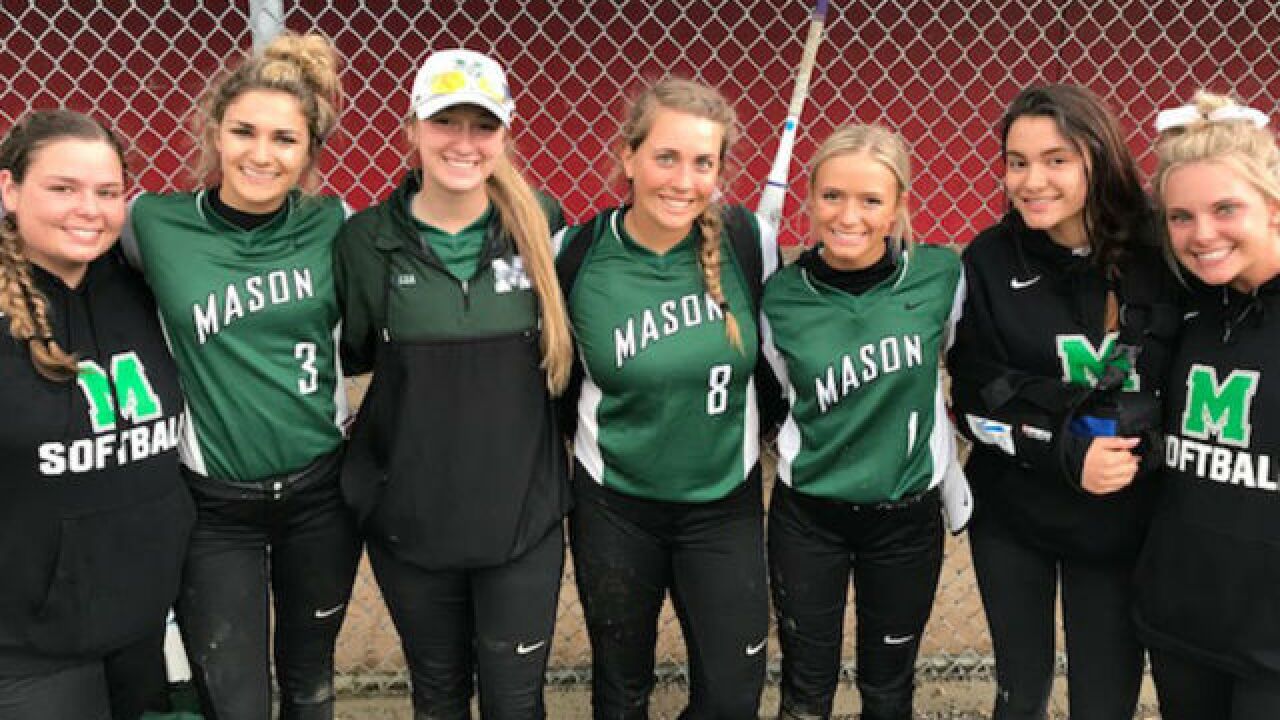 Abbey Mullins wears the Comets’ jersey with pride this spring knowing how much work was invested into 5:30 a.m. preseason workouts starting in October.

Elana Harrison likes the fact the team's standards continue to rise throughout the season.

Winning the Greater Miami Conference title has been an expectation at Mason. This year is no different.

This spring has been another successful start for Mason (10-2 overall, 7-1 GMC), which is ranked No. 4 in the Ohio High School Coaches Association Division I State Poll.

This senior class has helped the Comets earn a 60-2 record in the GMC since 2015. Mason has been undefeated twice in the conference (18-0 in 2015 and 2017) in the past four seasons. Mason has won outright or shared four consecutive GMC titles since 2013 .

Mason defeated host Lakota West 11-2 Wednesday after the Comets stranded 11 runners in a 4-3 loss to the Firebirds Tuesday afternoon at Mason.

There is still plenty of work remaining including games against Fairfield and Lakota East in early May, but Comets coach Liann Muff was pleased with how her team responded Wednesday.

“I know they are very proud of being co-champs or champs in the GMC the last three years and they are going to scratch their way and do everything they need to do to be able to do it this year,” Muff said. “It really speaks to the senior leadership on this team that they bounced back from (Tuesday) and turned it around because they have their eye on that prize still. They’re not going to lie down and give that up. It is significant.”

The seven seniors -- Zoe Bishop, Hannah Lea, Taylor Heitfeld and Jill Aquilia (injured) along with Harrison, Mullins and Popovich -- have their eye on that conference prize and beyond.

Bishop, Harrison, Popovich, Mullins, Heitfeld, Lea and Aquilia have all been starters or contributors since their sophomore year (2016).

In 2015, most of the current seniors started the year on the junior varsity teams but were brought up during the season or during postseason.

However, this close-knit group of seniors has an important identity that goes beyond anything with softball and playing time on the field.

Then in March, the softball program invites seven other high school softball programs for a "Day of Scrimmages" where each of the schools’ junior varsity and varsity teams participate in two scrimmages for the day.

Mason started the event eight years ago to showcase the sport and offer a service component to the seniors. This year's event was March 18.

"Our staff and players know that we are very fortunate to have the opportunity to coach and play at a school with great facilities, ample equipment, supportive parents and community," Muff said. "We truly believe that to those that much is given, much is expected."

Each year, the seniors choose a charity or group in which to raise awareness or money. In the past, the seniors raised money for those with juvenile diabetes or pancreatic cancer. The American Red Cross, St. Vincent de Paul, and the local Challenger League Baseball Program have also been recipients.

"It has become a right of passage for our seniors to run a successful charity event," Muff said. "They literally come to me in August at the beginning of the school already excited for the event in March. "Our Day of Scrimmages charity event gives our players the opportunity to think, plan, and work hard in the service of others. They embrace the event as a privilege not something they have to do."

This year, the senior chose Pink Ribbon Girls , which is a breast cancer support group. The seniors completely organized, promoted and operated the event, which raised $3,500 through concessions, T-shirt sales and silent auction baskets during the day.

While the Mason softball team continues to look ahead to the second half of the season, it can look to the preseason workouts and life lessons as a source of inspiration. The service projects have that much impact each year.

“It builds character,” Aquilia said. “It just helps you to know the sport isn’t just about playing softball. It’s also about you being a stronger woman and being a stronger person in general. It’s not just playing the game.”