Maslow's Army: After experiencing homelessness, they work to give others hope 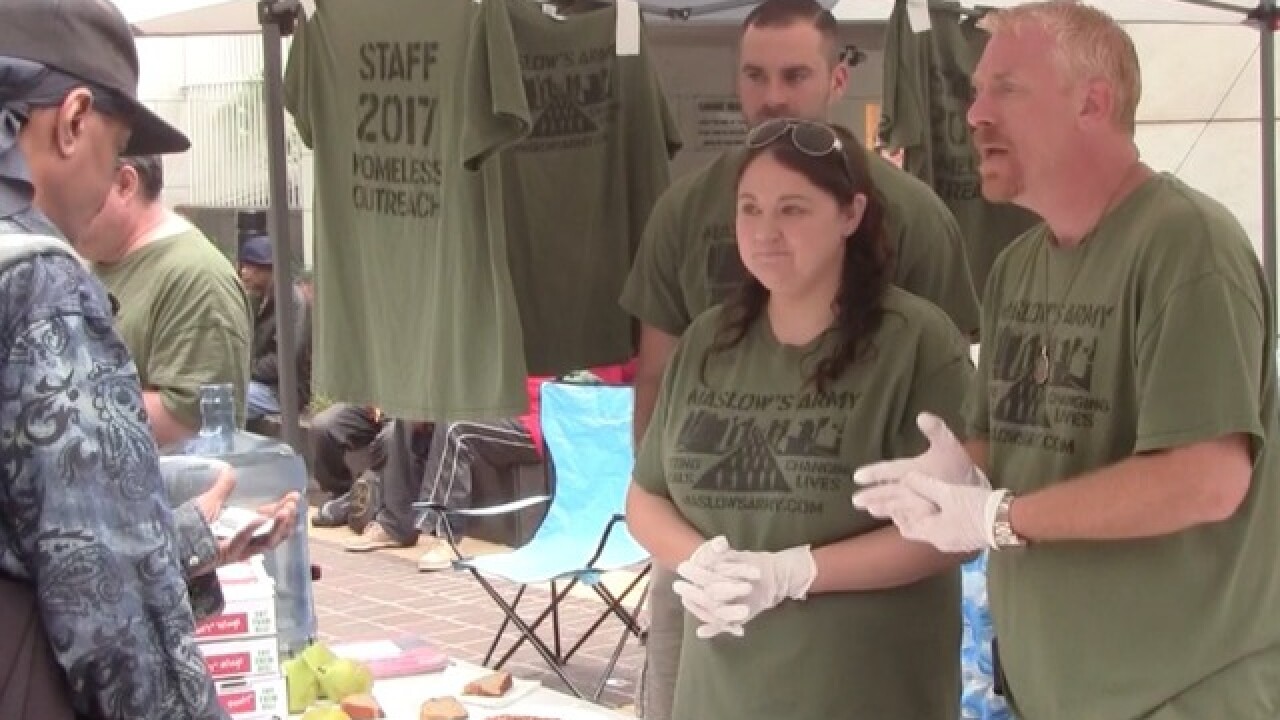 Copyright 2017 Scripps Media, Inc. All rights reserved. This material may not be published, broadcast, rewritten, or redistributed.
Lucy May | WCPO
<p>Susan and Samuel Landis and their volunteers stayed busy at the Maslow's Army tent just outside the entrance of Taste of Cincinnati.</p> 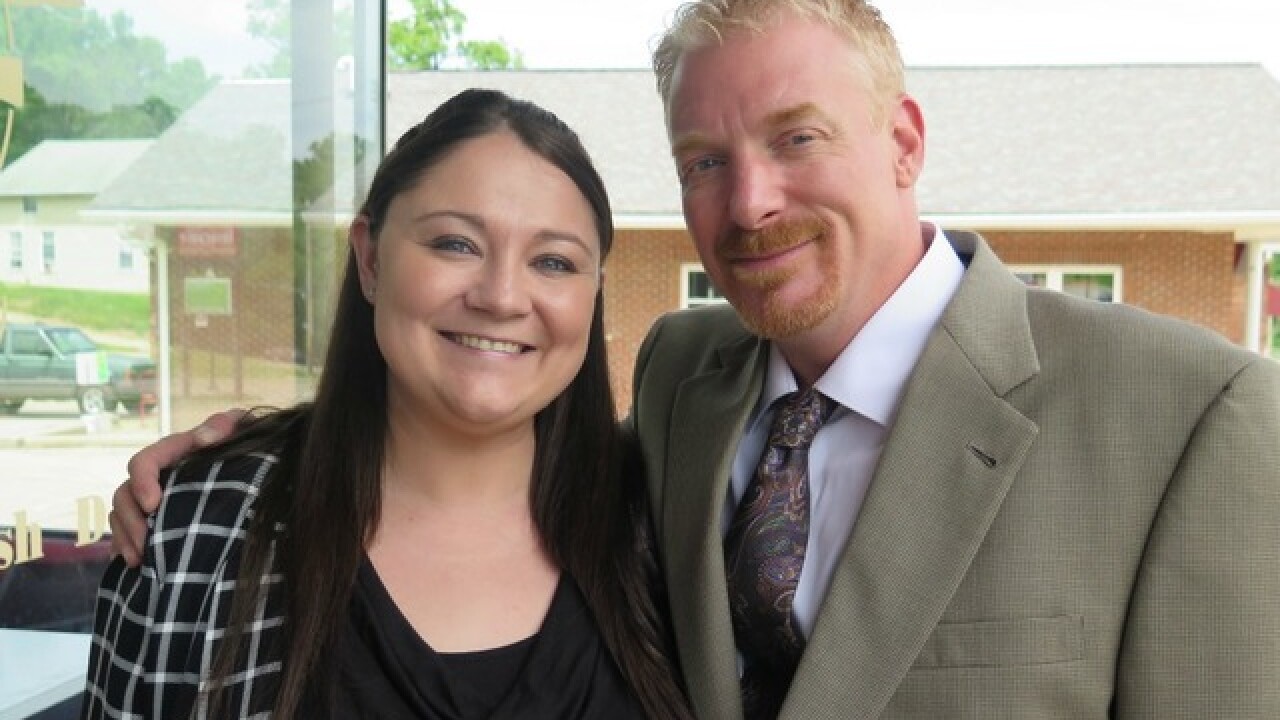 CINCINNATI -- Samuel Landis had been homeless for 20 years when Bruce Berger noticed him sleeping in the woods behind the Montgomery Inn Boathouse.

It was the middle of winter and freezing cold. Berger figured Landis would die if he stayed outside.

“Bruce got me off the street,” Landis said. “He showed me that change is possible.”

Berger helped Landis find a safe place to live. Later Landis enrolled at Gateway Community and Technical College, where he met another student who had experienced homelessness and would eventually become his wife.

Now Samuel and Susan Landis have started a nonprofit organization to help people who are struggling with homelessness, addiction and mental illness. Called Maslow’s Army , the organization aims to help people meet their basic needs and then work their way up to more stable and fulfilling lives. It's named for Abraham Maslow, the famous psychologist who theorized in his "hierarchy of needs" that people's basic needs must be met before they can become self-actualized.

“It’s very important that the clients are able to relate to our experience,” Susan Landis said. “That’s what people need to know. You’ve experienced it. You’re not above them. You’re at their level.”

The Landises received their articles of incorporation for Maslow’s Army in February and have tried to work quickly to make a difference. They created a full-color “hot meal guide” that lists places where people in need can get free breakfast, lunch and dinner seven days a week within walking distance of Downtown Cincinnati. They made 15,000 copies to distribute to people on the street and to others who want to help panhandlers without giving them cash.

And every Sunday for 15 weeks in a row before Taste of Cincinnati, Maslow’s Army set up a table at Fountain Square at 1 p.m. to give away free pizza, drinks and fruit along with new and gently used clothing to people in need.

During Taste of Cincinnati, the nonprofit set up a tent at Fifth and Main streets across from the culinary festival’s entrance and gave away more than 7,900 slices of Jet’s Pizza, along with bottles of water, fruit and desserts over the three-day weekend.

The Maslow’s Army tent was such a success that Taste of Cincinnati organizers expect to invite the Landises back next year, said Cynthia Oxley, director of corporate and community events for the Cincinnati USA Regional Chamber .

“We worked out a place where they could be to help those in need while keeping in mind that we had this big, major event going on,” Oxley said. “They did a really nice job, and we were happy to have them be a part of Taste of Cincinnati.”

Being able to help during the big event was a huge step for Maslow’s Army. But the Landises have even bigger plans.

Meeting needs on both sides of the river

In the coming years, the Landises hope to convert a 30,000-square-foot building into a facility that includes a soup kitchen, a two-floor detox center and residential space for independent living and for families experiencing homelessness. They also want to be able to provide space for homeless people to bring their pets so that they can get help caring for their animals while they get better at taking care of themselves.

Those big dreams are going to require major fundraising, said Berger, who remains a friend of the Landises and serves as acting treasurer of Maslow’s Army.

The organization will have its first big fundraiser at the Covington Chipotle Mexican Grill at 501 W. Fourth St. The restaurant has agreed to give Maslow’s Army 50 percent of the proceeds from purchases made between 4 and 8 p.m. on Friday, June 2. Customers must bring a Maslow’s Army flyer, show it on their smart phones or tell the cashier they are supporting the cause.

It’s another big step for the Landises, who have been funding the work of Maslow’s Army with their own money and donations from friends and family members.

They haven’t taken any salary from the donations, and they have volunteered their time as certified peer support specialists to help clients navigate social and medical services and serve as on-call helpers, 24 hours a day, seven days a week.

That willingness to provide help around-the-clock -- and the fact that Maslow’s Army is working to help people both in Cincinnati and Northern Kentucky -- sets the organization apart from other agencies that work to help people experiencing homelessness, said Kevin Finn, CEO of Strategies to End Homelessness .

“I think what they’re doing is great,” Finn said. “On the south side of the river, they’re really out doing something that nobody else was doing.”

All their efforts are based on their own experiences and their deep desire to help others who are going through the anguish they already have survived, the Landises said.

“I sincerely care about these people, and I want to see them all get off the street,” Susan Landis said.

Both she and her husband know first-hand how isolating and awful homelessness can be.

Both trace their paths to homelessness to their childhoods, although their experiences growing up were quite different.

Samuel Landis was adopted and was diagnosed with ADHD as a kid. He couldn’t sit still and got into trouble as a result, and none of the medications his adoptive parents tried to give him seemed to help. They eventually sent him to boarding school when he was 12 because they didn’t know how else to handle his behavior. When he was 18, they told him it was time for him to be on his own.

“I had to self-medicate,” Samuel Landis said. “I spent 25 years addicted to cocaine, alcohol and various other drugs.”

He developed an extensive criminal history for trespassing by sleeping under bridges or in hotel lobbies until he was removed. He stay connected with violent people to survive and had given up on trusting anyone until Berger found him.

Landis stopped using drugs but kept drinking even after he enrolled at Gateway.

“One day, I had been on a three-day binge drinking, and I felt my system shutting down. I was deteriorating very quickly,” he said. “I called Bruce, and he said, ‘you can either go get down to the hospital or you can go to sleep.’”

Landis chose to try to survive what he would later learn was acute pancreatitis.

“That is a bottom I’ll never forget,” he said. “I saw that I was selfish, self-centered, going through people’s lives like tornados. I wanted another chance at life to change that energy around me and be helpful to others.”

Susan Landis, on the other hand, grew up in what she describes as “a very loving home” with wonderful, supportive parents. But she battled social anxiety, social phobia and depression as a child that became almost impossible for her to navigate as a young woman.

“I was sleeping outside in a truck, and it was all due to mental illness,” she said. “Pretty much everyone counted me out. I lost all my friends.”

‘It’s all coming back’

She finally started taking medication that worked for her, re-enrolled in college at Gateway and started to rebuild her life.

“It was really tough,” she said.

Susan Landis left an abusive relationship, withdrew from classes and then re-enrolled again in 2015.

The following spring, in 2016, she met Samuel Landis. They got married last June and realized right away that they both were driven to help others.

“It’s really just an honor to be a part of this thing,” Susan Landis said. “To be able to be a voice of these people who are out there. Everybody’s experience is different.”

The Landises know that, of course, because they experienced so much themselves. And they talk freely about those experiences with the people they meet through Maslow’s Army as a way to connect with them.

That connection made all the difference for Kenneth Martin. He was homeless for four and a half years, living in doorways or under bridges or anywhere he could find shelter. Martin stumbled upon Maslow’s Army giving away free food, drinks and clothing on Fountain Square one Sunday. The Landises talked to him about how they had been homeless, and Martin took notice.

The Landises told Martin where he could get help and housing, and he followed up. Now he’s been off the streets and sober for four months, and he volunteers each week with Maslow’s Army.

“I’m more motivated to go back to work, keep myself looking presentable,” Martin said. “My self-confidence, my pride, my self respect, my dignity. It’s all coming back.”

It’s the kind of success story that Samuel and Susan Landis aim to repeat as many times as they possibly can.

Lucy May writes about the people, places and issues that define our region – to celebrate what makes the Tri-State great and shine a spotlight on issues we need to address. Childhood poverty is an important focus for her and for WCPO. To read more stories about childhood poverty, go to www.wcpo.com/poverty. To read more stories by Lucy, go to www.wcpo.com/may . To reach her, email lucy.may@wcpo.com. Follow her on Twitter @LucyMayCincy.